Nine swimmers have been honoured for their performances throughout 2018 at the Swim England National Awards.

And Thomas Dean, Leo McCrea and Maisie Macartney won the Talent Athlete of the Year prizes.

James Wilby and Thomas Hamer received the Spirit of the Commonwealth Games award recognising their achievements on the Gold Coast.

Performance Athlete of the Year

He lowered his own world record to 57.10 in the 100m Breaststroke at the European Championships, claimed gold in the 50m event and was part of the triumphant 4x100m Mixed and Men’s Medley Relay teams.

Earlier in the year, the 23-year-old won gold in the 100m Breaststroke at the Commonwealth Games on Australia’s Gold Coast.

Peaty said: “Thank you so much for the Performance Athlete of the Year award. This means the absolute world to me after the ups and downs this year.

“I’m looking forward to pushing on next year and, hopefully, I can do you all proud next year as well.” 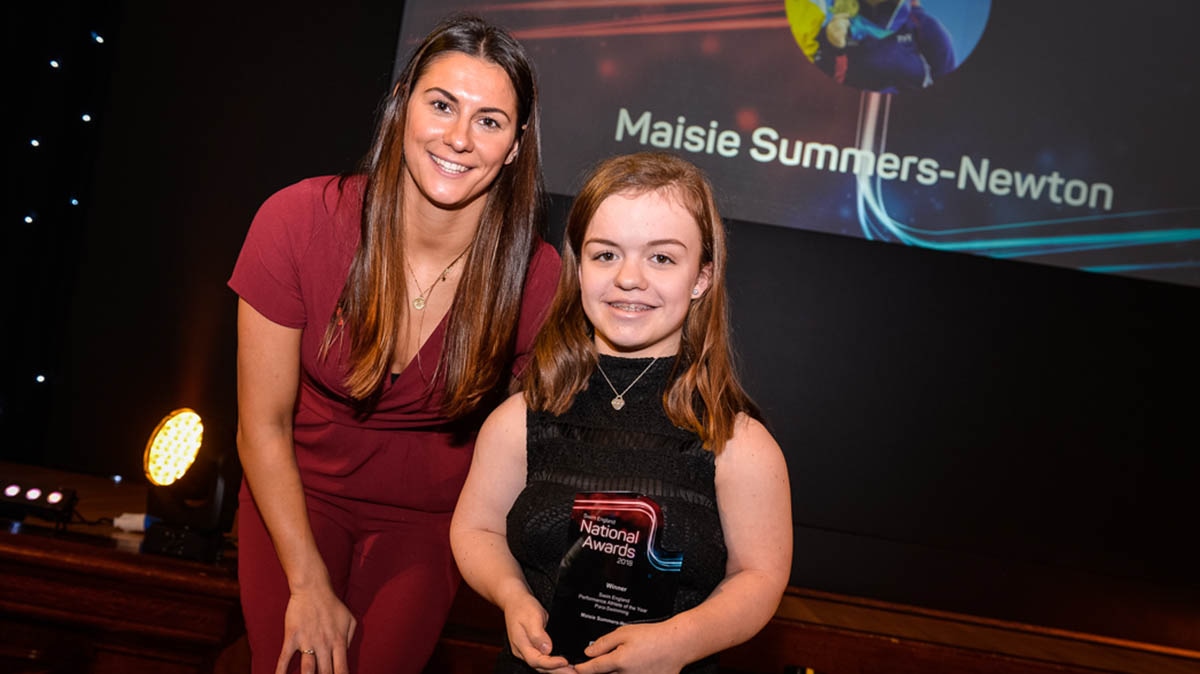 Summers-Newton burst onto the international scene at the World Para-swimming European Championships in Dublin, setting world records in the SB6 100m Breaststroke and the SM6 200m Individual Medley on her way to the title in both races.

And she claimed a third gold of the championships as part of the 34pt 4x100m Medley Relay.

The 16-year-old also won a gold medal in the MC 100m Breaststroke at the British Championships in Sheffield in July.

Summers-Newton said: “To win this award means so much to me.”

Meanwhile, Burnell struck gold at the FINA/HOSA Marathon Swim World Series 2018 in China by the narrow margin of 0.1 seconds.

It was his third medal of the 2018 series – he also won a silver in the Seychelles and a bronze in Portugal – while he was also part of Great Britain’s Open Water team at the European Championships in Glasgow.

Burnell was part of the Mixed Team which just missed out on a medal as they took fourth place in the 5k race, while he finished seventh in the individual 10k swim at Loch Lomond.

Talent Athlete of the Year

Dean enjoyed a remarkable year that saw him enjoy success on both the junior and senior international stage.

The 18-year-old University of Bath student set a new European junior record as he won gold in the 200m Individual Medley in Finland.

And he was then part of the 4x200m Freestyle Relay team that topped the podium at the European Championships in Glasgow.

McCrea’s hard work and careful planning ensured he had a very successful season with improvements across all events.

He made several finals at the British Para-Swimming International Meet and the British Summer Championships and set new personal best in the 400m Freestyle and 100m Breaststroke.

Due to his focus, dedication, commitment and embracing learning from the talent programme, McCrea has progressed each year whilst on the England Talent Programme and is now on the British Para-Academy, the first step on to the World Class Podium programme.

Macartney made her big breakthrough in open water this year with a fourth place finish in the FINA World Junior Championships in Israel, where she was only 0.14 seconds behind the bronze medallist.

She started as a freestyle pool swimmer and still takes part in those events, from 50m to 1500m races, proving you can combine both pool and open water training and be competitive in both.

Whilst being part of the Swim England Event Camps and International Competition Camps, she has steadily learnt and improved her open water racing capabilities, tactics and knowledge.

Her open water successes have gained her a spot on the prestigious Swim England Performance Squad 2018-2019. And although she has much to learn, her open water journey is looking very exciting.

She said: “It’s been a really good year for me.

“I have been to the European juniors for the third time and made my first world junior team, which was really nice. And I also had my highest international finish of fourth which was really good.”

Spirit of the Commonwealth Games

Hamer was the only English swimmer to set a world record at the Commonwealth Games as he won the S14 200m Freestyle.

He said: “It was a special night to be honest. I came away with a gold medal and a world record and got my medal presented to me by Prince Charles.

“I’m really proud to be recognised with this. It’s been such a successful year and I’m so proud to be here and share that honour with you guys.

Wilby was Team England’s most decorated individual swimmer on the Gold Coast as he won gold in the 200m Breaststroke, silver in the 100m race behind Peaty and bronze in the 50m event.

He was quick to praise the support he received from the staff at Loughborough for helping him achieve his medal haul.

“The Commonwealth Games were certainly a special experience for me and to be recognised by Swim England and to receive this award is something I will always remember.”