The victory equalled the most amount of golds ever won in the Olympic pool by Team GB – matching the total from the London 1908 Games.

Dawson recovered from a slip on the wall during her take off at the start of the race to finish the backstroke leg in 58.50, with Peaty clocking 56.78 to leave the Brits fourth as Guy took over.

He recorded his fastest-ever butterfly split of 50.00 to touch first as Hopkin dived in with a half-a-second advantage over the Chinese.

And she held her nerve to finish her 100m in 52.00 to spark wild celebrations.

Both Guy and Hopkin had withdrawn from individual races to focus on the team event.

Guy said: “I pulled out of the fly and it did really hurt me as I could have medalled but it’s paid off. Gold medal, world record – you can’t beat that.

“It’s pretty surreal. We knew we could do something pretty cool. We knew in the back of our heads if we got it exactly right to our race plan we could win it and get the world record.

“You can’t control what anyone else is doing, We did that and it paid off.”

Peaty said: “Mel is trying to keep me calm as I can get a bit carried away, especially when it’s for the team

“It’s amazing to be a part of these amazing women and Jimmy. My legs were shaking. I was diving in and I’d got far too much adrenalin.

“Jimmy knows if I go out too fast I’m not coming back. I had to show my experience, show my maturity and not get too carried away chasing the Americans.

“Right now, we’re the champions. Let’s go and enjoy it and, hopefully, we will be a force [in the Men’s Medley Relay] tomorrow and see what happens.”

Hopkin admitted it was a daunting prospect to be chased down by the Men’s 100m Freestyle champion Caeleb Dressel.

“When I turned, I just went for it. It’s an amazing feeling – I’m so privileged to be in this team.”

Dawson added: “If you had told me back in 2018, when I had my knee injury, I would be Olympic champion at the end of a delayed Olympics, I wouldn’t have believed you.”

Guy praised Freya Anderson for her role in the heat session, which allowed Hopkin to rest ahead of the final.

“Freya is part of this gold medal,” he said. “Everyone played their part. It’s more than four people.”

Proud: I’ve nothing to lose 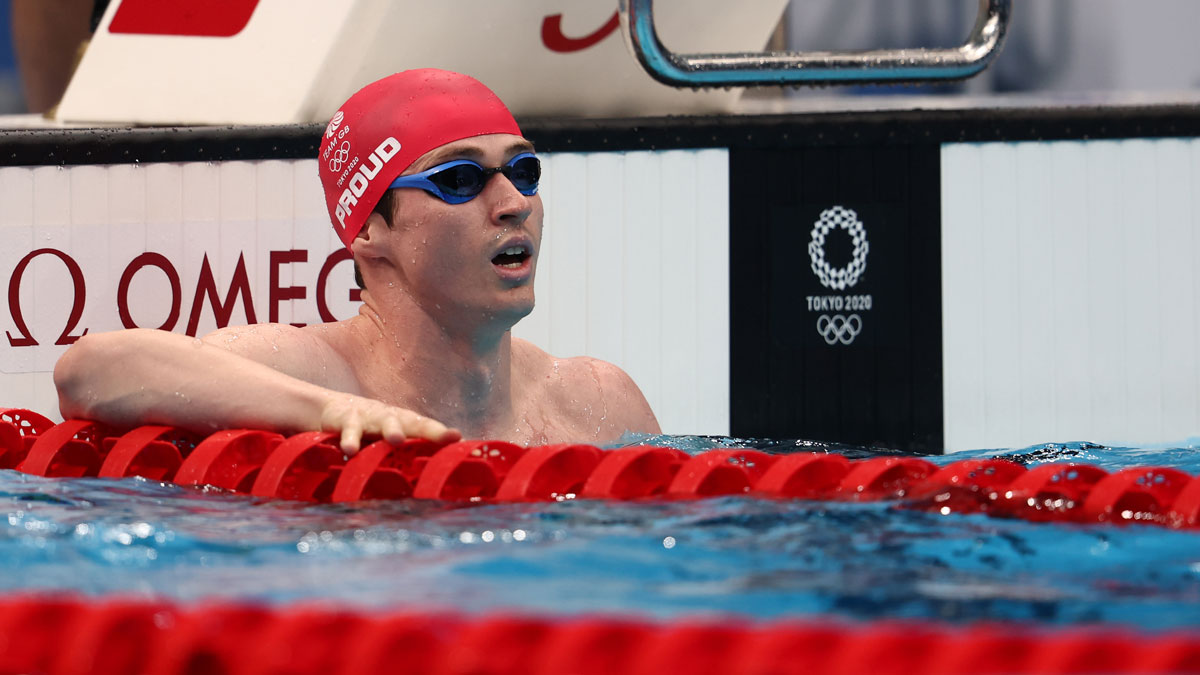 Ben Proud booked his place in the ‘splash and dash’ 50m Freestyle final and admitted a fear that his Olympic Games journey could come to a premature end had been a diving force in helping him to qualify.

Swimming in lane one, Proud finished in 21.67 to finish joint third in his semi-final and qualify fifth-fastest for Sunday’s race.

It was a vast improvement on his heat time of 21.93 – which Proud admitted he was not happy with.

He said: “Last night, I came into my race and did what I had to do but I was really quite upset with myself.

“I have put a lot of dedication into this year. I’ve put my family and friends and everything to the sidelines and I could have been kicked out last night and that would have been the end of it.

“So I wanted to come into tonight and give it a bit more and now, tomorrow, we are in the final so that’s job done.

“That’s where I want to be and it’s going to be a good race, that’s for sure.

“[Caeleb] Dressel is swimming amazingly well. The rest of the field, it’s all up for grabs. Any people in the race tomorrow have a chance of winning medals. I want to go in tomorrow, have fun and enjoy the Olympics.

“I was very nervous last night. I had thoughts about this Olympic journey coming to an end so I’m just relieved.

“I can go to bed tonight a little bit more peaceful and come back tomorrow morning with nothing to lose really.”