The quartet of Adam Peaty, Freya Anderson, James Guy and Kathleen Dawson surpassed the previous record of 3:38.82 which was set by GB at the European Aquatics Championships earlier this year.

With the Mixed 4x100m Medley Relay being a new event on the Olympic programme, the British team now also hold the Olympic record.

Starting off the incredible performance with the backstroke leg was Scottish swimmer Kathleen Dawson, who then handed over to breaststroke Olympic champion Adam Peaty.

Peaty put GB in a great position for James Guy to then get Britain into the lead with his butterfly leg. Guy passed the reigns to fellow Bath National Centre swimmer Freya Anderson who brought it home.

Anderson was a body length clear on the final 50 metres and secured a dominant win for Team GB who comfortably qualified with the fastest heat time. The nation closest to them were the USA who managed a time of 3:41.02.

Following the win, Anderson explained how it felt to be on a team with ‘some of the best swimmers in the world’.

She said: “It feels really good, especially being on the team with these guys, they’re some of the best swimmers in the world.

“Me personally, I knew I had to step it up and get them through and hopefully Anna [Hopkin] can take over in a few days’ time and get the gold.” 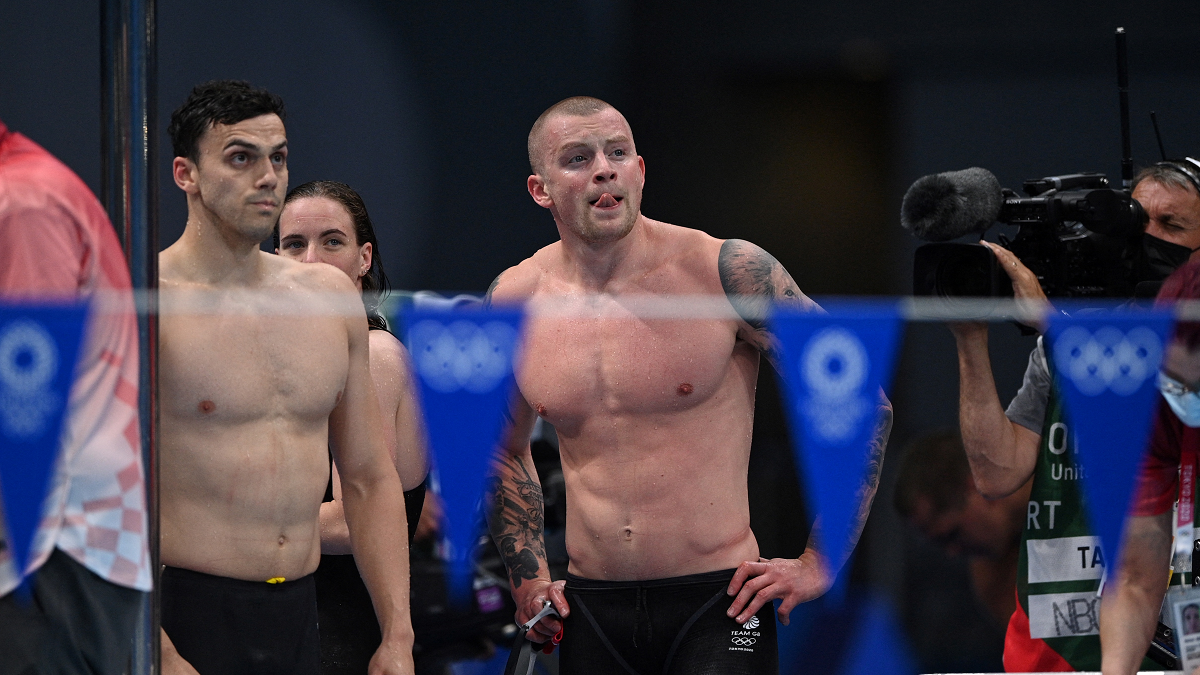 On the event being included in the Olympics for the first time, Guy said: “The mixed events are getting more and more popular now at the world championships and European championships, so it’s only fair it’s brought into the Olympic Games and hopefully it’ll continue and do different things.”

“It’s a popular event at every other championships,” added Peaty. “I think to come to an Olympics, it shows swimming doesn’t have to stay the same.

“It can develop to what the modern world is, which is new races and keeping it entertaining. You might be leading by a lot but then someone else might take over which is the fun of it.”

After his gold earlier in the week, Peaty discussed what it was like to kick start GB’s medal tally.

He continued: “It’s been good. It just shows you that British Swimming is really going from strength to strength.

“Over the last six years, the culture, the ethos and everything we live by has evolved into something that’s idolised by other teams now.

“It’s been great to give that a rolling start with the gold medal in the hundred but what those other guys did is just remarkable and if I helped them just 0.5 per cent then that’s my job done.

“But again, the team’s getting older, more experienced and I can’t wait for the next generation to start kicking through now and saying – this is possible.”

In the eighth and final heat of the Men’s 100m Butterfly, Jacob Peters was the only British swimmer in action.

Guy, who competed in this event at the Rio 2016 Olympics and made it into the semi-finals, withdrew from the event this time around with the relay heat following shortly after.

Peters of the Bath National Centre finished his heat in sixth place with a time of 52.07, which saw him miss out of a place in the semi-final.

“It’s just one of those nights I think, I was a bit nervous but nothing out of the ordinary really.”

Scottish swimmer Cassie Wild also failed to qualify for the semi-final of the Women’s 200m Backstroke after her time of 2:12.93 resulted in a 12th place finish in her heat.