Day two of Olympic action in Tokyo saw Team GB putting out more solid performances, though an upset in the Men’s 4x100m Freestyle relay means that GB failed to qualify for the finals.

Tom Dean and Duncan Scott were standouts in the Men’s 200m Freestyle and progress comfortably to the semi-finals.

Swimming in lane four, Dean’s morning swim of 1:45.24 saw him finishing second in his heat. Speaking after his race, he said: “It was good, it’s the quickest heat swim I’ve ever done.

“The South Korean lad went a bit quicker than I was expecting – 1:44 in the heat but that’s the way the event is going at the moment.

“It’s just about progressing round-to-round so yeah, happy with it.”

“Two times out with Covid this season but I was able to have a good trials and I’ve had a solid block since then so all looking good moving forward,” he added.

A timing malfunction meant that Duncan Scott’s time for the 200m Freestyle was amiss directly after his race, however, it was later confirmed that he clocked a time of 1:45.37.

The British record holder in this event and University of Stirling swimmer has a lifetime best of 1:44.47 which he swam in April of this year. 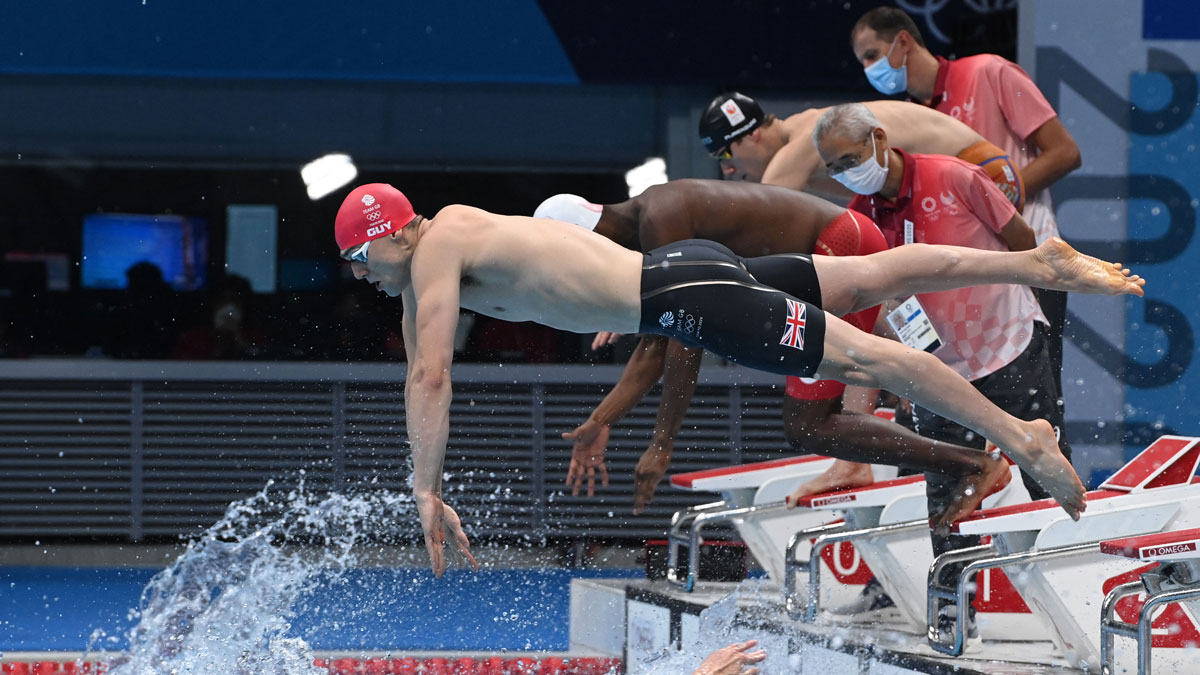 The team put on a fantastic display, with Richards raising spirits with an early lead after the first leg with a best time of 48.23.

Experienced athlete and two-time Olympian Guy carried the torch across the second 100 metres, though tough competition from Canada, Australia and America saw the GB men dropping to second place at the halfway point.

It was then up to Joe Litchfield and 16-year-old Jacob Whittle to bring the race home, both of whom did so in a gutsy fashion.

Whittle, who anchored the race for Great Britain, stormed down the last 50 metres and split a time of 47.50 for his leg of the race.

An extremely tight finish between GB and Canada saw the Canadians just getting their hands on the wall first – just 0.17 ahead of 5th place finishers GB.

With the team just 0.04 behind 8th place Russia, they failed to qualify and will therefore not progress to the final.

Semi-finals for Dawson and Wild

Strong opening swims from Kathleen Dawson and Cassie Wild saw the Stirling pair securing their places in the semi-finals of the Women’s 100m Backstroke.

Dawson finished second in the final heat with a time of 58.69 – just over half a second off her British record time of 58.08 which was set at the European Championships earlier this year.

Wild’s time of 59.99 saw her dipping under the minute-mark and also guaranteeing her spot in the semi-finals.