The success in the pool came from the British backstroke specialists on day nine of the Paralympics with one gold and two bronze medals won in Tokyo.

Bethany Firth and Jessica-Jane Applegate were both on the podium in the Women’s S14 100m Backstroke final.

Firth retained her Paralympic title that she has held since London 2012, now making it three consecutive gold medals in this event.

She managed a time of 1:05.92 and following the result, she explained that this is the event she had been ‘waiting all week for’.

Jessica-Jane Applegate also matched her Rio 2016 result, finishing third to take the bronze medal in 1:07.93 – an improved time to the one she swam in the previous Games.

In the Men’s event, Reece Dunn claimed his fifth medal as he won bronze in a time of 59.97.

He was the only Brit to go under the minute mark, with Jordan Catchpole the next to finish. His time of 1:00.96 was just enough to take fourth place.

Louis Lawlor finished eighth overall on his Paralympic debut in 1:01.80.

On his performance, Dunn said: “I’m very pleased with this race, I think that equalled my personal best as well.

“It’s been a long week or two weeks, so I was a bit tired going into that but, overall a solid swim.”

Maisie Summers-Newton was the quickest of the British trio competing in the Women’s S6 400m Freestyle final.

Ellie Simmonds, who had the quickest heats time out of the British athletes, was initially disqualified from the final but a successful appeal meant that she was reinstated in the rankings.

An emotional Simmonds admitted that this was most likely her final Paralympic Games. She said: “I don’t know what happened with the disqualification. It’s a bit painful but I’m sure I’ll find out more.

“It’s tough, we’ve seen this Games people have moved forward, it’s been difficult for me to move forward with them.

“I think for me, this is going to be my last but I’ll go home and evaluate. I knew going into these Games this was going to be the last, I don’t think I can go for another three years.

“I’ve absolutely had a wonderful competition and I’ve loved every minute of it. I can’t thank everyone enough for the support – my coach, Billy Pye, my parents, my sister, Andy and Adam and everyone at Camden Swiss Cottage, everyone for getting me here to these Games and also for helping me to get to four Paralympics.

“There’s no words to describe it, I love the Paralympics, I love absolutely everyone on the team, it’s just been incredible. 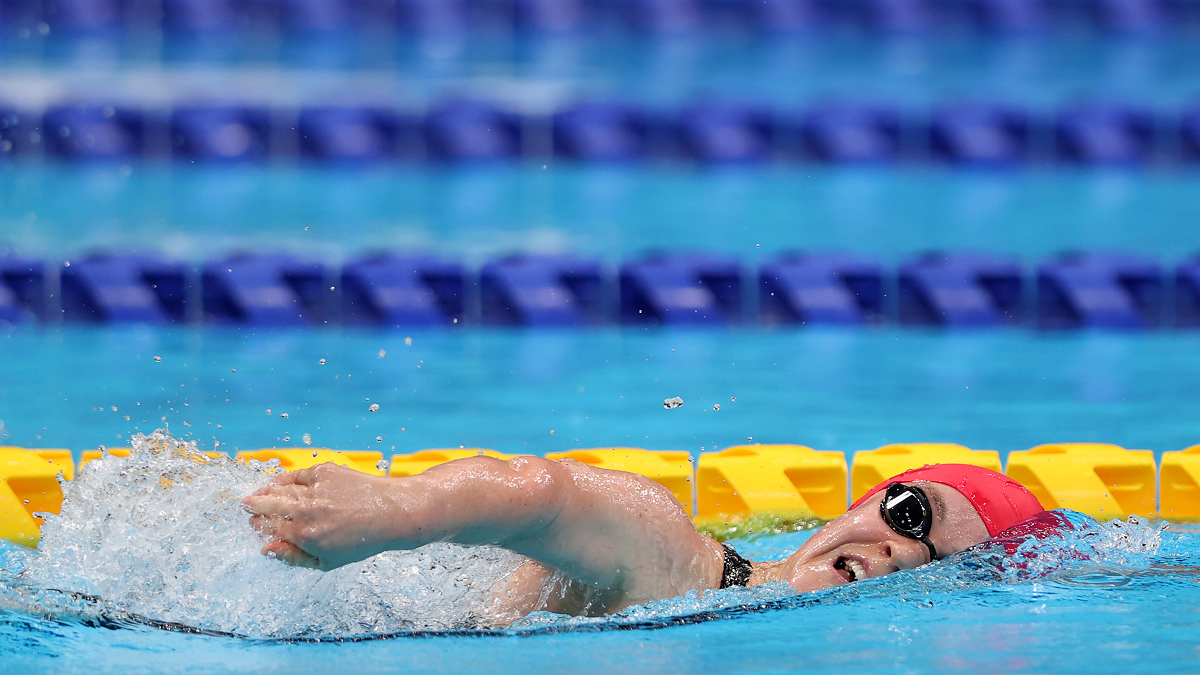 “I’m looking forward to going home. One thing about these Games is you don’t have your family and loved ones in the crowd and for me they’re like my comfort blanket.

“Especially Billy, he’s like my rock – he’s not just my coach, he’s my best friend and not having him here has been hard for me but the support of British Swimming has been amazing, Rob Aubry [head coach] has been amazing at this competition for me, he has helped me.

“Being with Maisie has been amazing, Steph Millward – I could be standing here for hours naming all the people who have helped.

“It’s been an amazing part to play, inspiring those next generations, I’m honoured and it makes me emotional to think about Maisie, all those girls and guys have been inspired by watching me at 2012.

“And now, they are inspiring that next generation. It’s not just me out there racing, it’s everyone behind me and I’m so thankful for that.”

‘We need to be proud of fourth’ say relay team

It was a good performance from the quartet of Stephanie Millward, Summers-Newton, Toni Shaw and Zara Mullooly.

USA took the gold, followed by the Russian Paralympic Committee in second and Australia in third.

On the race, Millward said: “To finish on a high, finish fourth in the whole, wide world, with this amazing group of people is wonderful. We were close to a medal.

“These girls will go on and win more medals, more, more, more. They’re an inspiration to everyone. We need to be proud of the fourth.”

Mullooly said: “It’s been a hard week, it would’ve been nice finish on a high. Everyone pulled their weight and tried their hardest, we couldn’t really have asked for more.”

Shaw added: “Relays are my favourite, especially with these guys! As long as I can be in the relay, I’ll be happy.”

The Women’s S9 100m Butterfly saw another fourth place finish for Shaw as she finished just 0.44 outside of the medal places in her individual event.