Imogen Clark smashed her own British record as she stormed to a Swim England National Winter Championships title in style.

Clark showed her class as she blitzed the field in the Women’s Open 50m Breaststroke at Sheffield’s Ponds Forge, winning in an impressively quick 29.35.

That knocked 0.08 seconds off the 29.43 she set in Sheffield almost four years ago.

The rest of the field had no answer to Clark’s dominant display as she took the gold medal by a huge 2.27 seconds. 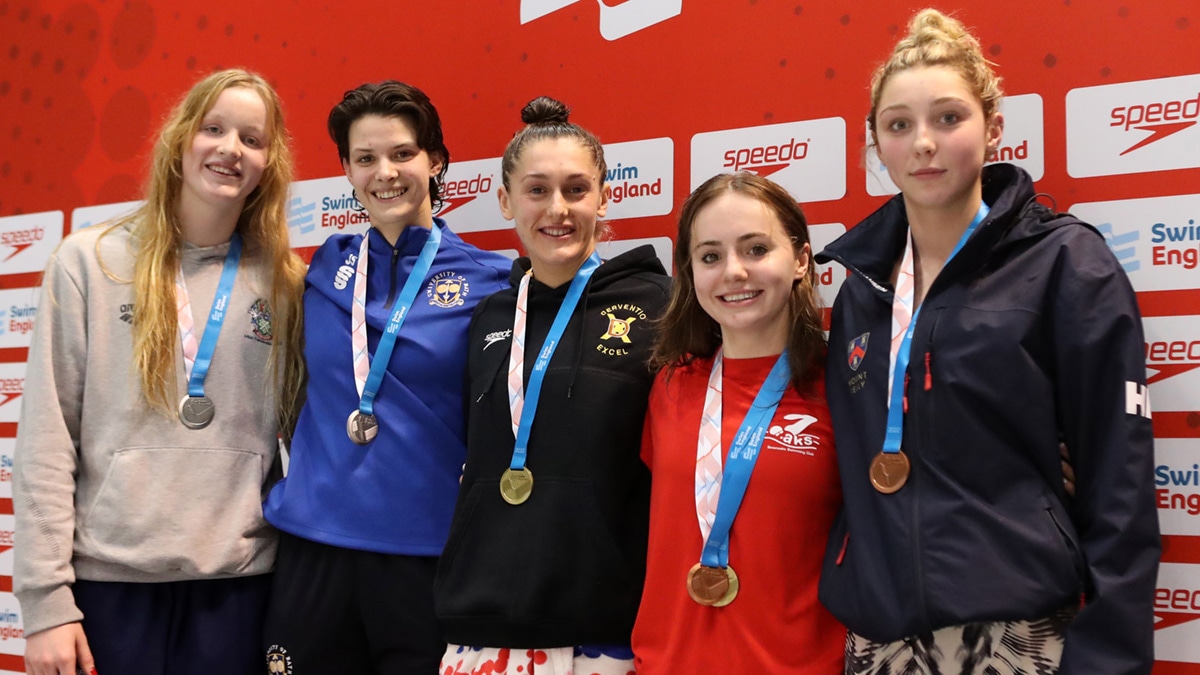 Bath University’s Jana Spinner was Clark’s closest challenger as she took the silver in 31.62.

That was narrowly ahead of Sevenoaks swimmer Aaliyah Richards, who claimed the final podium place after finishing in 31.72

Richards’s performance, however, ensured she won the junior gold medal.

In the 17 Years and Under race, Swansea Aquatic’s Mabli Collyer was first, winning in a time of 31.81.

Only 0.13 seconds behind was Torfaen’s Theodora Taylor, while teamipswich’s Beth Young was third in 32.15 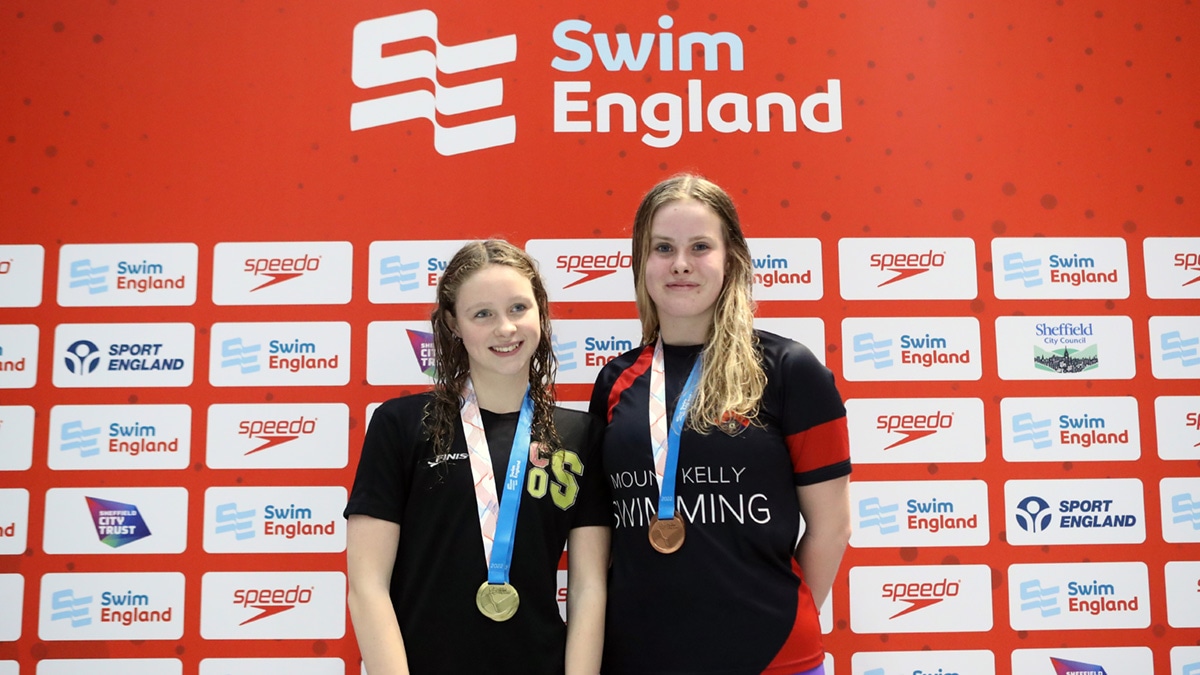 Amelie Blocksidge backed up her 800m Freestyle medals with a phenomenal display in the Women’s 1500m Freestyle on day two of the National Winter Championships.

The City of Salford swimmer was the youngest athlete competing in the fastest heat, at only 13-years-old.

After taking the lead at the 300m mark, she didn’t let up, showing power and determination to touch the wall in a time of 16:20.28.

Blocksidge’s time was almost 14 seconds clear of her nearest rival and she deservedly took both the open and junior gold medals.

As all of the fastest finishers were under 18, they were all presented with both open and junior medals.

The Men’s 1500m event saw more familiar faces on the podium, with the same one-two finish as in Friday’s 800m swim.

City of Liverpool’s Tyler Melbourne-Smith added two more gold medals to his collection after his time of 14:56.70 meant he topped the open and junior standings. 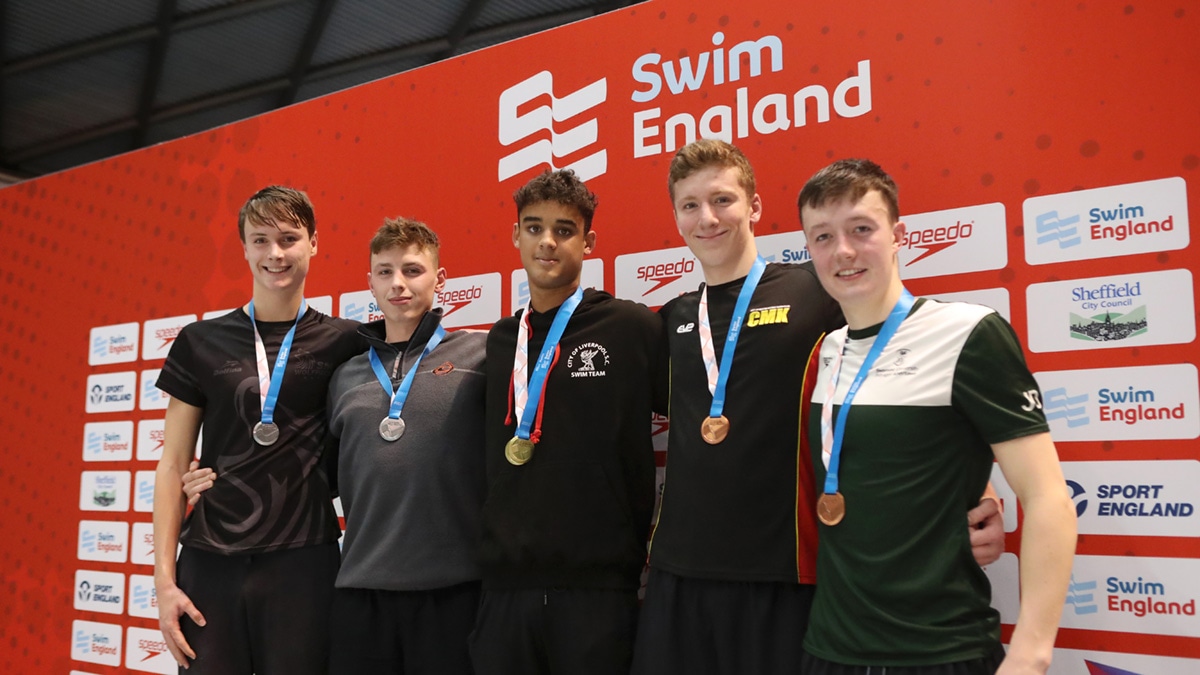 He was again followed by Swansea’s Nathan Hughes who secured silver and was joined by his team-mate Joseph Deighan who won the open bronze medal.

Reece Grady and Harry Wynne-Jones switched places in the junior medal positions this time around – with Grady winning silver and Wynne-Jones the bronze.

Laura doubles up with another title

Laura Stephens bagged her second national title in the space of 24 hours by the narrowest of margins.

The Loughborough swimmer added the Women’s Open 100m Butterfly gold to her collection after celebrating victory in the 200m race on the opening day of the championships.

A frenetic race saw the 23-year-old edge out Northampton’s Betsy Wizard by 0.08 seconds as Stephens topped the podium in 58.54.

Wizard was 0.30 adrift at the 50m stage and came within a whisker of denying Stephens a golden double but she had to settle for second place in a time of 58.62.

That was 0.38 seconds ahead of Derventio’s Georgina Pryor, who took the bronze medal after finishing in 59.00. 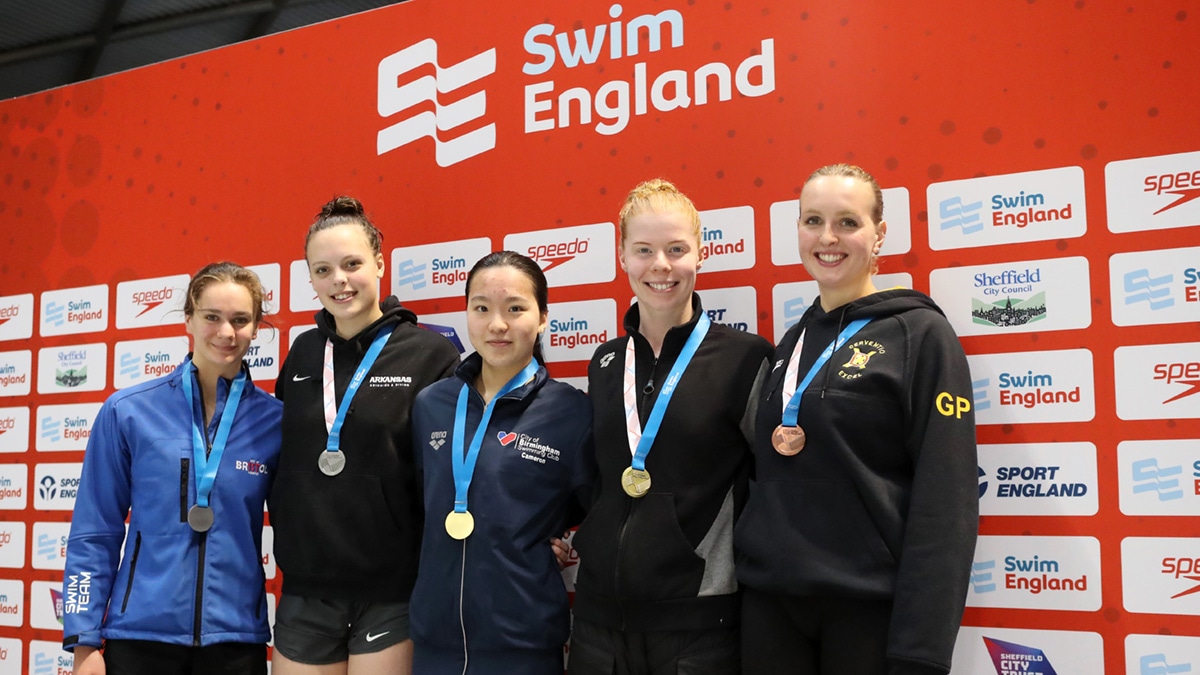 Mount Kelly’s Flawia Kamzol shattered her personal best time on her way to victory in the Women’s 17 Years and Under 100m Butterfly.

The 15-year-old was the only swimmer in the field to dip under 60 seconds as she clocked 59.83 to take top spot.

City of Bristol’s Leah Evans was third after touching home in 1:01.53.

Gold a Shaw thing for Sophie 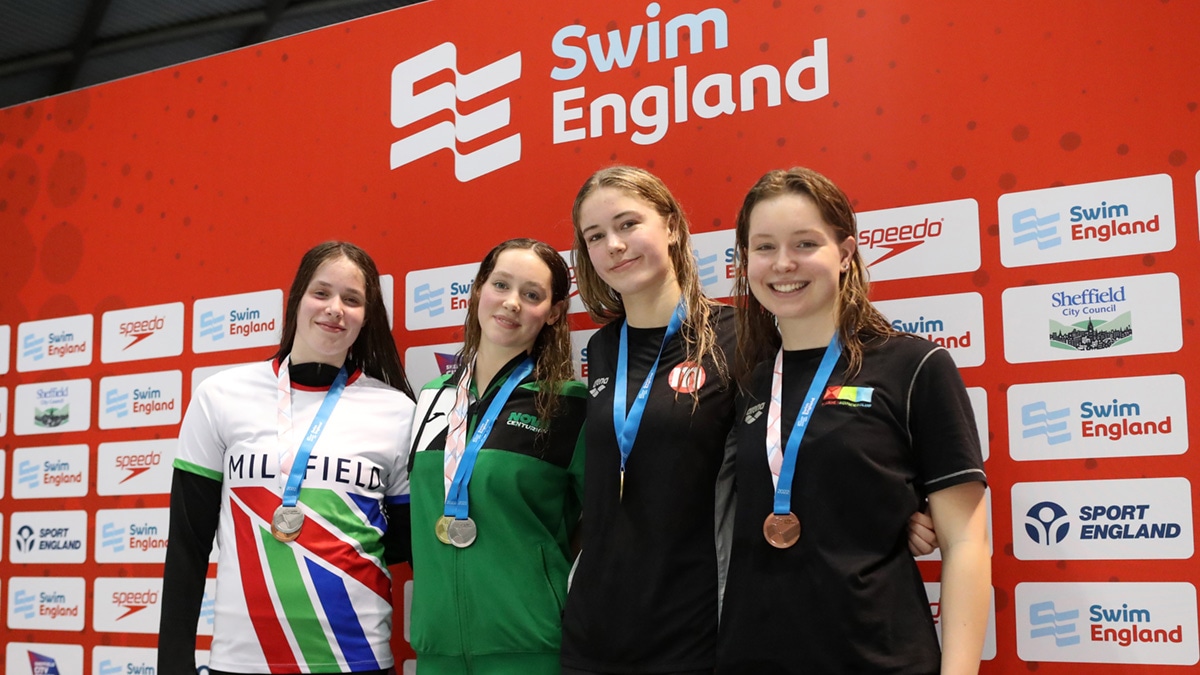 City of Manchester Aquatic’s Sophie Shaw triumphed in a thrilling race for the wall in the Women’s Open 200m Backstroke final.

The 20-year-old shaved 1.72 seconds off her morning heat time to take the gold medal ahead of Nova Centurion’s Iona Colbert and Millfield’s Evie Dilley.

The lead changed hands throughout the race but Shaw touched home first in 2:08.35, with Colbert 0.24 adrift in 2:08.59, which was enough for her to take the junior hold medal.

Repton’s Lucy Hitchin executed her race plan to perfection to win the Women’s 17 Years and Under 200m Backstroke final.

The Repton swimmer lowered her heat time by 0.63 seconds as she lead the field home in a new personal best of 2:12.21.

Seventeen-year-old Hitchin was third with 50m to go but had plenty left in the tank and triumphed by 0.60 seconds ahead of teamipswich’s Matilda Bogle, who clocked 2:12.81.

Home favourite Sophie Bromley had set the early pace but couldn’t hold on to her advantage and the City of Sheffield swimmer had to settle for third in 2:13.61. 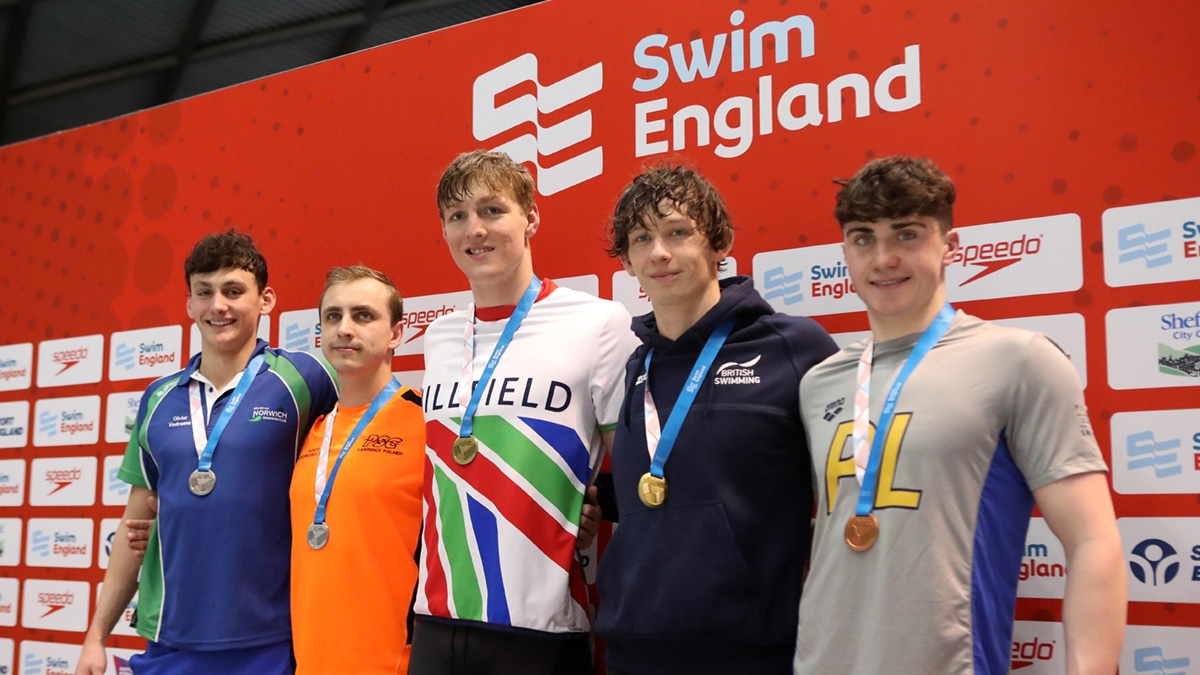 Loughborough’s Greg Butler, who represented Team England at the Birmingham 2022 Commonwealth Games, took the win in the Men’s 100m Breaststroke.

The 22-year-old stormed down the home straight to win the open gold medal in 58.83, despite strong competition from Putteridge swimmer Lawrence Palmer.

Palmer was 0.63 behind at the touch to earn the open silver medal. In third, taking the open bronze and also the junior gold medal, was Millfield’s Elliot Woodburn (59.61).

It was another close finish between Plymouth Leander’s Ronny Hallett and City of Norwich’s Olivier Vedrenne for the junior silver and bronze awards. 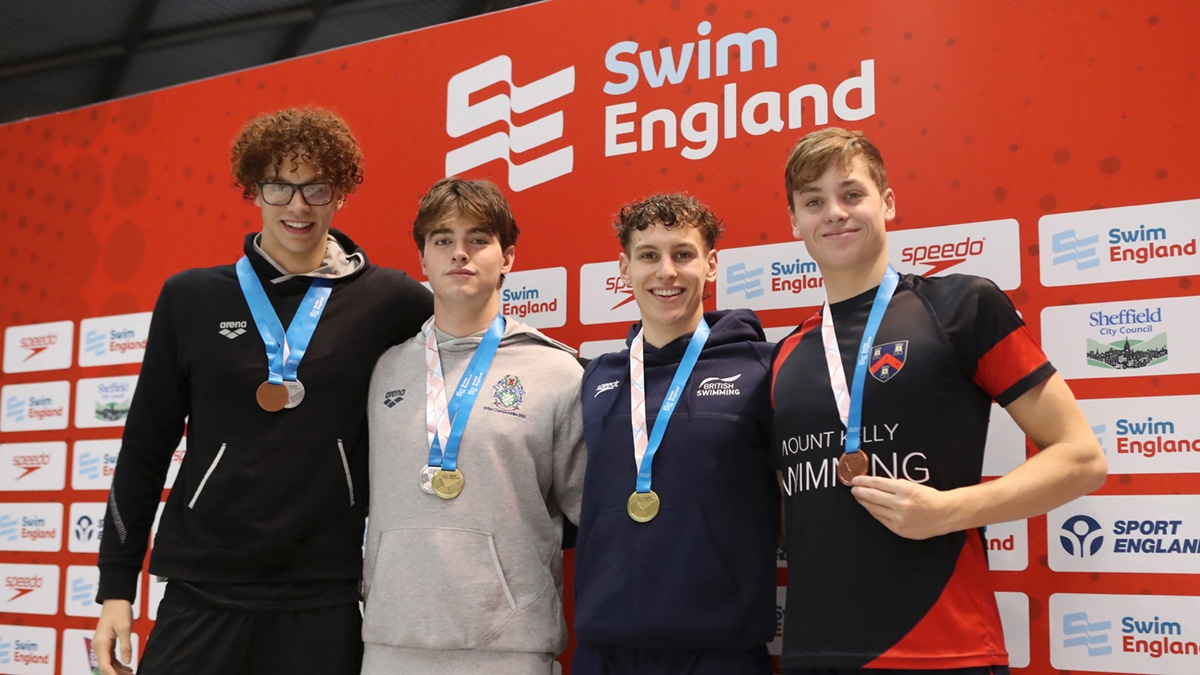 In the Men’s 200m Individual Medley, Millfield’s Alexander Painter was in the lead at the 50m mark but it was Charlie Hutchinson who came through to take gold from lane four.

The Loughborough swimmer had the advantage on the freestyle leg and began to open up a gap between himself and the rest of the field. He finished in 1:57.09.

It was the second Individual Medley title of the competition for Hutchinson, following his victory in the 400m event on the opening day.

Painter held on to secure the open silver from lane two as well as the junior title in 1:58.53.

Winning the open bronze and junior silver was Reuben Rowbotham-Keating (1:59.05) of City of Manchester Aquatics and the junior bronze went to Matthew Ward of Mount Kelly.