Grace Harvey and Ellie Challis both set new British records as they secured their places on the podium at the World Para Swimming Championships.

Harvey’s record-breaking swim came in the Women’s 100m Breaststroke SB5 final as she stormed home to finish in a time of 1:41.19.

The Paralympic silver medallist opened up a huge lead as she stretched away from the rest of the field to win her first world title and was an impressive 17.04 seconds ahead of her nearest rival.

Harvey now has a full set of medals at this competition, having secured bronze in the 100m Freestyle S6 and silver in the 200m Individual Medley SM6 earlier in the week.

Iceland’s Thelma Bjorg Bjornsdottir was the next to touch in 1:58.23 and the bronze medal went to Egypt’s Ayaallah Tewfick, who set a new African record time of 2:01.86.

In the Women’s 50m Freestyle S3 final, Ellie Challis knocked almost a second and a half off the British record to take the silver medal.

The 18-year-old clocked a time of 49.76 seconds, with USA’s Leanne Smith the only swimmer to go faster after she equalled the world record time for this event in 40.32.

Patricia Valle Benitez of Mexico finished third with a time of 58.37. 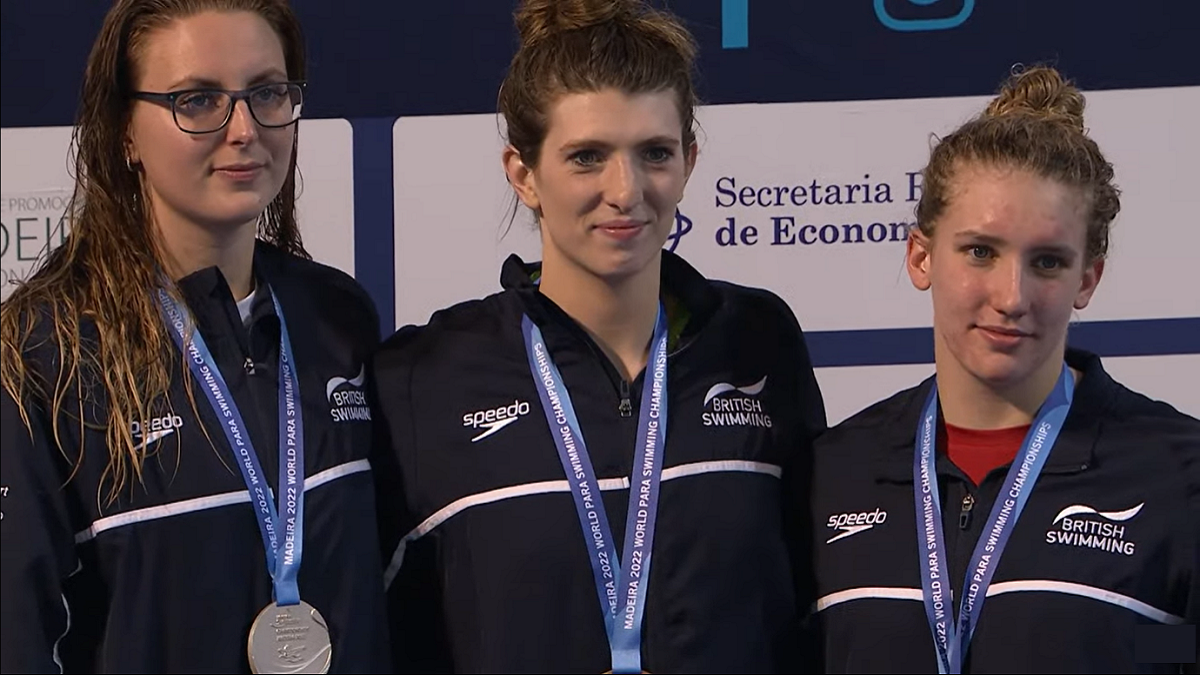 Bethany Firth was again the leader of a clean sweep of the medals, this time in the Women’s 200m Individual Medley SM14 final.

She secured her fourth gold medal of the competition as she stepped onto the podium alongside her teammates, Jessica-Jane Applegate and Louise Fiddes, to see the same top three as in the 200m Freestyle S14 final.

Applegate took an early lead but Firth showed her dominance on the breaststroke leg to go out in front.

Fiddes fought hard for the bronze medal with a superb final 50m, allowing her to beat Australia’s Paige Leonhart to the touch by 0.07.

Toni Shaw was part of a sensational battle for the title of Women’s 400m Freestyle S9 final world champion.

The GB swimmer came out on top against Hungary’s Zsofia Konkoly, with a perfectly timed finish the only difference after 400 metres.

The 18-year-old led at the halfway point but was followed closely by the Hungarian. There was nothing to separate the pair as they powered down the home straight.

Russell holds on for silver

Hannah Russell swam her fastest time of the year to qualify for the Women’s 100m Freestyle S12 final and still holds the championship record in the event, which she set back in 2015.

The Paralympic gold medallist was half a second behind the race leader at the turn but couldn’t make up the gap.

But with Ukraine’s Anna Stetsenko looking to steal the silver medal, Russell was able to hold on to second place to provide a very close finish between herself and the Ukrainian athlete.

In the Men’s 100m Freestyle S12 final, Stephen Clegg added a silver to his two gold medals from the opening two days of competition.

He showed plenty pace in the second half of the race to record a time of 54.10.

The result takes his tally to three medals for the event. The golds came in the S12 100m Backstroke and 100m Butterfly finals.

Clegg has battled with Azerbaijan’s Raman Salei in each of his medal successes so far, but it was Salei who took gold this time around in a time of 53.07.

The bronze medallist was Maksym Veraksa (54.13) of Ukraine.

Hollis was later part of the British quartet competing in the Mixed 4x100m Medley Relay 34pts final in the last event of day five.

He teamed up with Alice Tai, Maisie Summers-Newton and Oliver Cater, the latter of whom was making his GB debut. They finished sixth in a time of 4:40.58.