Water Polo teams from the North West of England had the upper hand at the British Champs 2016, which took place on the 14-15 May at GL1 Leisure Centre in Gloucester.

All of the finals were hotly contested, with Manchester and Liverpool claiming eventual victory in the men’s and women’s competitions respectively.

After seeing off Bristol in Saturday’s men’s semi-final, Manchester overcame a strong challenge from last year’s champions Cheltenham in a hard-fought final at Gloucester’s GL1 arena.

There was nothing between the sides at half time with the scores tied at six all. Manchester edged ahead in the third, before eventually cementing the 17-11 win with goals from Rae and Joe O’Regan in the final few minutes.

“It’s been an amazing weekend, culminating in our victory against Cheltenham,” said Olympian O’Regan, top goal scorer in the victorious Manchester side. “It was a hard-fought game and the score was close at half-time, but we won quite convincingly in the end.” 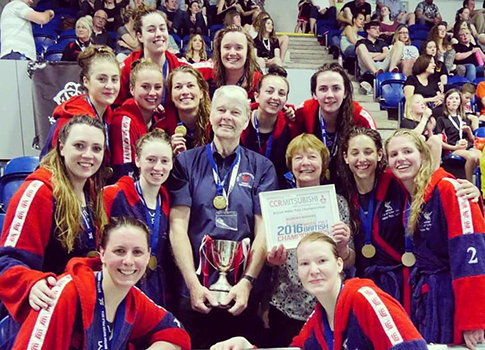 Meanwhile Liverpool Lizards continued their unbeaten run to retain the British Champs 2016 women’s title. They took an 8-5 win against London Otter. Liverpool started the game strongly, taking a 4-0 lead. Then, a run of goals from Otter took the score to a nail-biting five a-piece at the start of the final period.

Liverpool’s experience showed, as they pulled ahead and controlled the game in the final few minutes. A final goal from Olympian Hazel Musgrove took the goal tally to eight, sealing Liverpool’s victory.

“This was our third British Championship win and the latest in a winning streak that goes back to December 2013.” said Fiona McCann, Olympian and captain of the Liverpool team.

“It was a great event, hosted by Cheltenham Water Polo, and we’re grateful to everyone who helped make it such a success.” – McCann

Earlier in the day, Coventry saw off Caledonia 16-5 in the women’s bronze medal playoff. Bristol beat Lancaster in the closest game of the day, eventually winning 22-21 following an electrifying penalty shootout. Goalkeeper Andrew Crawford was the Bristol hero between the sticks.

Dean Enon speaking on behalf of event sponsor CCR Mitsubishi commented, “The weekend proved to be a great occasion and one which we at CCR Mitsubishi were extremely pleased to be associated with. The competitiveness was fierce, but fair. I’d like to congratulate not just the two winning teams but all the competitors and organisers that made it a huge success.”

A capacity crowd at the GL1 Leisure Centre watched the final matches at the event, while thousands more followed the competition via a live online stream, making this the most viewed domestic event in the history of British water polo.

View all of the matches from the British Water Polo Champs.