This weekend, water polo teams from across Britain will head to Gloucester for the 2016 British Water Polo Championships.

The countless hours of swimming fitness, land training, ball work and tactical drills put in by Britain’s top water polo teams, combined with the lively crowd at the GL1 Leisure Centre will no doubt make the weekend of action one to remember.

Saturday 14 May will see the top four men’s teams and top four women’s teams competing across four exciting semi final matches, for the much sought after places in Sunday’s finals.

Women’s teams London Otter and Coventry will kick-off the weekend’s action, as they go head to head at 2.30pm. With a series of close encounters between the two teams across the British Water Polo League season, the game is set to be a thriller. Otter centre forward Peggy Etiebet said, “Coventry has some wily experienced players, but we don’t want to focus too much on them but play our own game. We will aim to lift the trophy of course, but there will be some tough opposition.”

The first of the men’s matches begins at 4.00pm, with Lancaster going up against reigning BWPL and British champions, Cheltenham. On the encounter, Cheltenham’s Mike Thomas commented, “Lancaster are always a very difficult side to face. Both teams are fit and have strong counter attacks and some outstanding shooters that if given space will be able to create opportunities from anywhere in the half.”

Manchester take on Bristol Central in the second of the men’s semi-finals at 5.30pm. Ahead of the fixture, Olympian and Manchester player Joe O’Regan commented, “We have a strong squad which every member of the squad contributes and works hard for one another. Our coach works hard on our tactics and our defense is our strength aided by having the best two goalkeepers in the country to choose from.”

The last of Saturday’s matches will see current BWPL and British champions Liverpool Lizards face Caledonia in the second of the women’s semi-finals. Scottish international Gael Logan, Caledonia, is looking forward to the contest, commenting, “We’ve played Liverpool a few times over the past wee while and they’re clearly in the form of their lives and the team to beat, so that’ll be a challenge.” 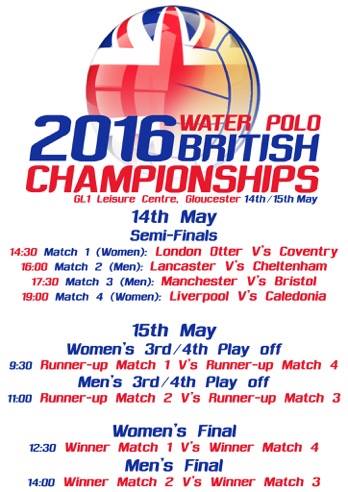