Last week, the Great Britain Under 19 women’s squad descended on Manchester, to begin their preparation for September’s European U19 Water Polo Championships in Gouda, The Netherlands.

The newly formed squad includes some members of last year’s U19 team, along with a number of new faces, with talented youngsters breaking through the ranks.

The squad took part in a five-day U19s training camp at Manchester Aquatics Centre, with those from further afield being hosted by teammates’ families, including over half the squad at goalkeeper Megan Gaunt’s family farm! 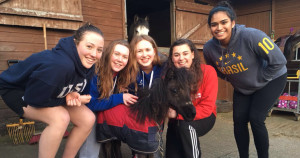 Read on to hear from Kathy Rogers and Hannah Patchett, as they blogged from their week at the U19s training camp…

The first day provided the opportunity for the squad to meet each other before our morning session.

Our squad consists of multiple age groups from 1997-2001 born, so many of us have not trained together before. Although some of the squad had come straight from other international tournaments and training camps, the enthusiasm was still high.

The day was a typical training day for a pre-Euros camp, with two pool sessions that focused on basic skills, counter-attack and counter-defense, a gym session and (of course!) an emotional chat by head coach Theo!

A difference in today was that instead of a gym programme, we had strength and conditioning tests and got to meet Katie Hesketh who will be our S&C coach for the summer and is a big role model for us, having played for junior and senior GB women’s water polo teams.

We also got to meet our assistant coach Balazs Kiss and team manager Fee Pimblett.

Day two got off to a tough start with the morning session containing the dreaded swim test, but everyone performed well, so Theo rewarded us by letting us have a go on the giant inflatable for a bit of team bonding before our afternoon session!

We continued our focus on the counter attacks and counter defence, but also worked on set defence too. Another gym session saw the end of the gym testing and sorted out our team warm ups.

It was a good start to day three with a session focusing on skills for man up, which we later developed in the afternoon pool session into game situations. Between sessions today we focused on nutrition with an interactive session led by Katie.

We also had a short video analysis session, following which we played a fun team game providing a good opportunity for the squad to bond.

Adding to the day was motivational/emotional chat number two from Theo and inspirational talks (and poor banter!) from Olympians Rosie Morris and Fee.

On day four we showed good progression on our man up and man down, with the team starting to work well together. Between sessions everyone had a one-to-one with the coaches, setting individual goals for us to work on at our home clubs.

We also had a talk by our new sports psychologist, Suzie Godfrey, who will be working with us throughout the summer.

The second session got off to a hard start with a leg test in the pool, but soon progressed into a game, giving us a chance to show the skills that we have developed throughout the week.

The fifth and final day, just a morning session, mostly consisted of match play. Although we had only spent five days training together, it was clear to see that we are already becoming a team unit and have the ability to bring in tactics and ideas from the week.

After our cooked breakfast, it was time for goodbyes and lots of hugs from the new friends people had made over the week, and of course emotional chat number three by Theo, reminding us to keep training hard for ourselves and the team until we next meet in a few weeks’ time.