Commonwealth champions Laugher and Harding believe they can only get better

Seven-time Commonwealth Games gold medallist Jack Laugher praised his synchro partner Anthony Harding for a great job – and warned the rest of the world there is still room for the new duo to improve.

Laugher and Harding took the Birmingham 2022 3m Synchronised Springboard title with a series of impressive dives at the Sandwell Aquatics Centre.

They dominated throughout and the result never looked in doubt once they established a lead after the second round – especially as they made very few mistakes executing the hardest dives in the contest.

They had three 80-plus scores, including an 88.92 in the penultimate round for their forward four-and-a-half somersaults in tuck.

And Laugher believes they can only get better as a pairing.

He said: “With this new partnership, what’s exciting for me is there’s still room for improvement.

“I would love to do a diving list one day where we actually truly maximise what we’re capable of.

“The Olympics is tricky, there’s a lot of things that can change in two years but what I’m excited for is the fact that we are solid, we are consistent and there’s very few things that go wrong.

“Anthony has done a great job. It took a massive ask to come here, first Commonwealth Games in front of a home crowd and to perform that consistently and that solidly.

“A really good performance for a lot of reasons but there are things that need to be improved on.

“In terms of the difficulty of our list, we were definitely the favourites on paper going in, especially after our performance at the world championships. But you have to remember it’s a home Games, there’s a lot of pressure, a lot of expectation coming in.

“Winning in Glasgow and in Gold Coast, there’s a lot of pressure on myself and I’m sure that Anthony feels that way as well.

“We solidified ourselves in the first couple of rounds and then I made a few mistakes here and there but overall, really pleased with how we’ve done.”

It’s the second event Laugher has won three Commonwealth golds in succession, having secured a hat-trick of 1m Springboard titles on the first day of the diving competition.

At Glasgow 2014 and Gold Coast 2018, he topped the podium with Chris Mears in the 3m Synchronised Springboard but, this time around, achieved the highest score of the three triumphs alongside Harding. 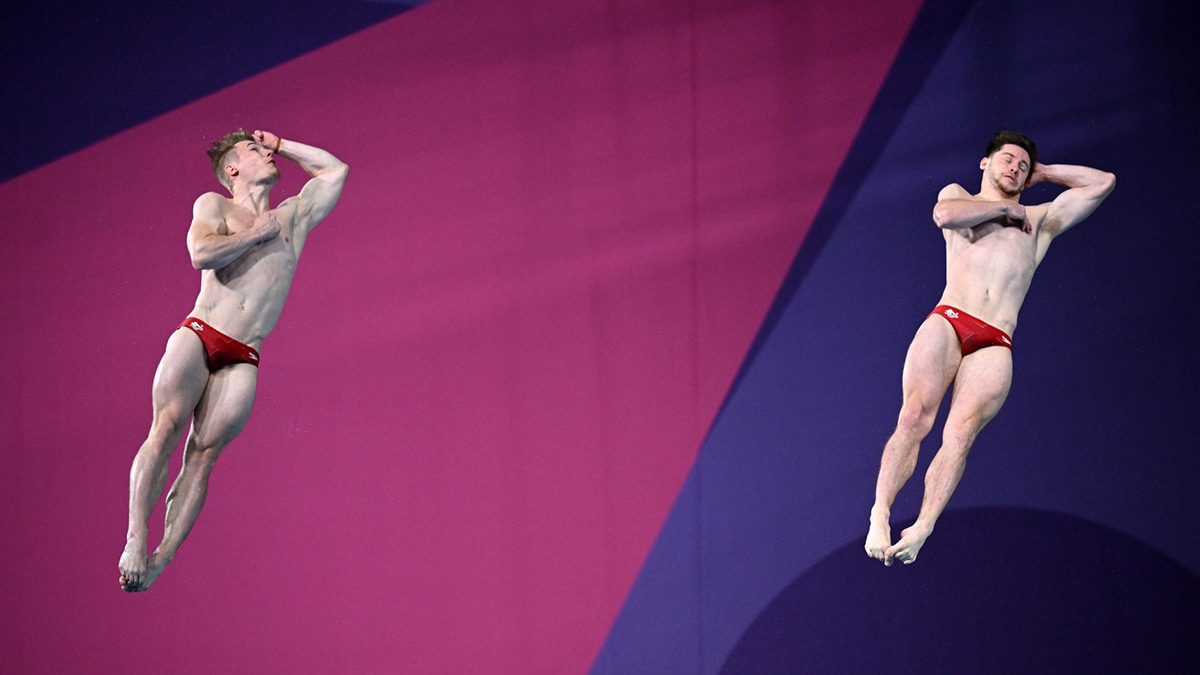 Their total of 438.33 was a huge 61.56 points ahead of the Malaysian duo of Gabriel Gilbert Daim and Muhammad Puteh who took the silver medal with 376.77 points.

Australia’s Samuel Fricker and Shixin Li were the bronze medallists on 374.52.

“I struggled to get to sleep last night, I felt a bit worse for wear this morning but I put together an okay performance.

“The feeling of winning is extraordinary, it’s the reason why I do this. I love the sport.

“Competing on the big stage and achieving massive things is part of this, the enjoyment – it’s what keeps the fire burning.

“Seven out of eight over the past three [Commonwealth Games] is really good. It’s tough staying at the top, people are out to get you.”

Harding said he felt like he was copying his homework from the smart kid after doing his best to emulate Laugher’s performance.

“I’ve watched him for so many years in training,” he said. “I moved to Leeds when I was 10 and was just watching him for 12 years now.

“He’s had so many gold medals here so it feels like I had to just put a steady performance in and I’m glad I did that.

“I just copied everything he did and it’s like copying my homework from the smart kid.

“I’m over the moon with it. I did a pretty okay performance – I could have done a little better – I know Jack  is maybe a little bit disappointed.

“I’ve worked so hard for this. I’ve watched him at three other Commonwealths, three Olympics so it’s been a while for me to get up to this stage.

“It’s been a massive opportunity for me so I just enjoy it as much as I can but there is that pressure where you feel like you have to do well.”

In the Women’s 1m Springboard preliminary round, Yasmin Harper finished second with a new personal best score, while Amy Rollinson was sixth.

They will both go into tonight’s final full of confidence after a strong finish to the contest, with both picking up their highest scores in the last round.

They both relished the home support with Harper saying: “It’s amazing.

“There is a lot of people out there and hearing everyone who has come to support you is great and I’m really excited for the final.

“Being here a while has been good as we’ve been able to get used to the boards a bit more and the surroundings. That’s good, that’s positive. I’ve had a good experience here so far so excited for the rest.

“When people get medals, it makes you think that you want to go in there and fight for a medal as well.

“I’ll have a little rest, get ready and warm back up for the final this evening.”

Rollinson added: “I really enjoyed listening to the crowd, it was just so much louder than usual as it was a full crowd just cheering us on.

“I enjoyed it. It’s my first proper senior international individually and I’m just going to use the experience to hopefully improve this afternoon.”