Overwhelmed Andrea Spendolini-Sirieix expressed her ‘pride’ as she shared the Birmingham 2022 Commonwealth Games podium with her Team England ‘family’.

Spendolini-Sirieix and Eden Cheng grabbed a silver medal in the Women’s Synchronised 10m Platform competition with their last dive of the contest.

It meant their Team England colleagues, Robyn Birch and Emily Martin, had to settle for a bronze as the host nation won five of the six medals on offer during the day three finals session at the Sandwell Aquatics Centre.

After seeing Team England secure a clean sweep in the Men’s 3m Springboard final, Cheng, Spendolini-Sirieix, Birch and Martin were determined to secure medals for themselves.

Birch and Martin took second place with their final dive and knew a podium place was secure as Cheng and Spendolini-Sirieix took to the platform.

They achieved their highest score of the final with a total of 76.80 for their back two-and-a-half somersaults, one-and-a-half twists in pike to take silver.

It was Spendolini-Sirieix’s second medal of Birmingham 2022 after taking gold in the individual 10m Platform event and when asked how she felt, she said: “That’s a really hard question and I’ve had that a lot.

“But I feel really proud.

“I am so overwhelmed by how incredibly loud and supportive the crowd are.

“I was quite nervous with my last dive. It was like my individual, the same dive I needed to land and to have a celebration with Eden and then we saw them [Birch and Martin] come over and celebrate with us is a really special moment.

“Sport is so beautiful because you compete against each other but, in the end, you’re one big family.

“I am really proud of them and I know they have had some obstacles in the lead-up to this Games so to have them on the podium with us is speechless.”

Cheng spoke about putting each dive behind you and focusing on the next one – and revealed what they said to each other before their final round.

She said: “We are used to these situations so we just put our heads down, tell each other how confident we are and that we’ve got it. 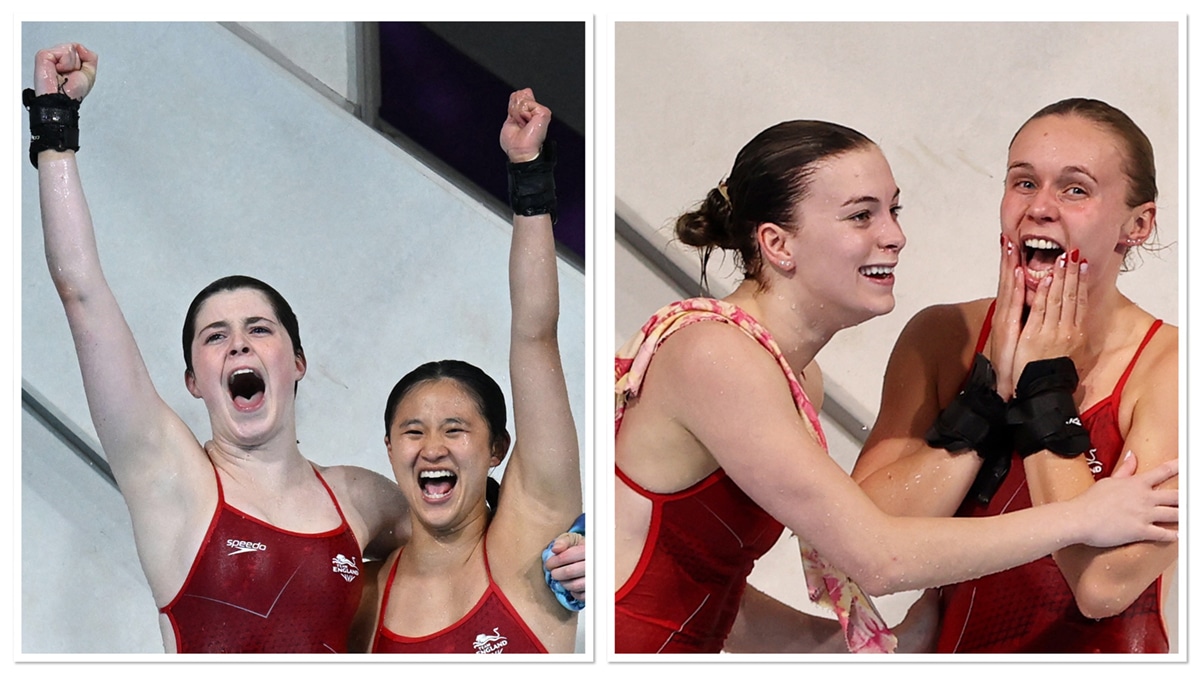 “It’s definitely important and the fact you can have one bad dive and you can’t think about that because that’s gone, and the next dive is different.

“To have the ability to think about what’s in the present is really important in diving.”

Martin praised the crowd and admitted it was amazing to be competing after she required stitches in a head wound after swimming into the wall before the Games.

She said: “I think we just went out there to enjoy it, so to take a medal [makes it] even better.

“We’ve really enjoyed the experience and the crowd and fans are amazing.

“Their cheers were definitely uplifting. It didn’t make you more nervous, it made you want to dive even better for all those people in the stands.

“I’ve dived with both Andrea and Eden as a synchro pairing. We’re all here together and the support within Team England, especially the diving team, is just great.

Birch added: “It means a lot.

“When we did our last dive, we weren’t sure.

“I don’t usually look at the scores because I find it distracting but looking at the scoreboard and realising that we’d got a medal, it was amazing, like a dream really.”

“Diving on your own can be a little bit tough sometimes, [whereas] diving in a synchro partnership makes it so much more fun.

“You get to share your experience with somebody else and me and Emily get along so well, so I’m sharing it with my best friend.

“The crowd is so uplifting. Beforehand we were worried that we’d be more nervous but [it felt like] the crowd was there for you and it motivated us.”