Jack Laugher using pain of Gwangju as motivation for Tokyo 2020

British diver Jack Laugher says his path to the 2020 Olympic Games in Tokyo has been emboldened by the disappointment of missing out on being crowned world champion at Gwangju 2019.

Laugher was on track for his maiden World Championships title – and a world record score – heading into his final dive of the 3m springboard competition in South Korea.

The 24-year-old was more than 30 points clear of second-placed Xie Siyi and needed only two points to guarantee himself a medal.

But a failed entry meant Laugher scored only 30.60 points and was forced to settle for a bronze medal.

The experience has provided a valuable learning curve as he targets his first individual Olympic title at Tokyo 2020.

Laugher told FINA Aquatics World Magazine: “Obviously at the time I was pretty annoyed, being in such a good position, potentially getting my first-ever world title in such a difficult sport to break out against the Chinese and be so far ahead.

“Then to end up in third place was extremely disappointing but I had to just reflect on it.

“The next day I was already, not over it as such, but I’d already sat down and thought about it. I had so many conversations with my coach afterwards to understand what happened and what we could do to rectify it.

“Now it’s happened, I’m quite glad in a way that I’ve had the time to work on it for next year.

“We’re going to change around the diving order potentially because it’s happened twice now and both times it’s where I’ve been winning and on for a world record.

“I much prefer that it happened this year rather than next year in Tokyo.” 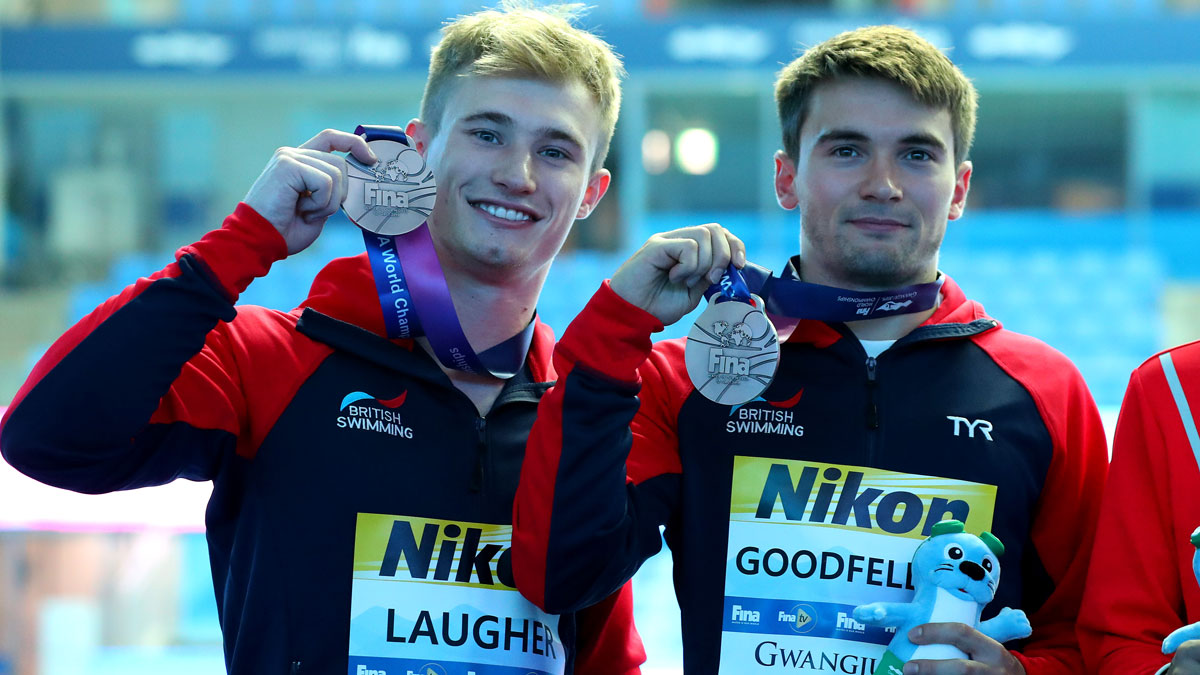 By winning an individual bronze and a silver alongside Dan Goodfellow in the 3m synchro in Gwangju, Laugher secured two Olympic spots for Great Britain.

At the age of 21, Laugher won gold in the synchro alongside Chris Mears at Rio 2016 and with four years of experience – as well as multiple international medals – he is confident of rising to the challenge in Tokyo.

He added: “In synchro, I knew it was going to be a really hard push because me and Dan are a new synchro pair and going out there and trying to get a medal was almost too difficult.

“I wasn’t 100 per cent sure if we’d do it but our preparation was really good and we ended up coming away with a silver medal.

“In individual I knew, I’ve got a lot of confidence in myself, so I knew I could final and get that spot for Team GB.

“I’d say preparation is going really well so far, I’ve got those spots and I think that puts me in a really good position for next year because I don’t have to go to the World Cup now with the pressure of trying to qualify for the Olympic Games.

“I’ve seen some great teams and great athletes not make it before and that’s the harsh reality of it. Four years down the drain.

“So, for us, it’s brilliant that we’ve got the whole year to prepare our dives and really focus on what we need to do rather than getting too worked up about the qualifiers.”

The 2020 international season gets underway with the FINA Diving Grand Prix in Madrid on 14 February, before the FINA Diving World Series opens in Montreal on 28 February.