The 24-year-old comfortably defended his 50m Breaststroke title but was just outside his world record time at the Nambu International Aquatics Centre, Gwangju, South Korea.

Peaty clocked 26.06 as he won his second gold medal of the 2019 FINA World Championships by an impressive 0.60 seconds.

He now has a hat-trick of 50m world titles to his name after also winning gold in Kazan in 2015 and Budapest in 2017.

Peaty, who also completed a treble of 100m world titles on day two of the championships, made a slow start but soon burst through the field to take the lead.

Peaty said: “I’ve done the triple-double, which is what I came to do and 56 happened, so there’s not a lot else to say really – I’ve completed everything I wanted to do.

“I put together a pretty perfect race and I was only just off my world record.

“It’s great to come back with all the medals I can. Each World Champs I go to I get more experience and learn even more about how to deal with the pressure.” 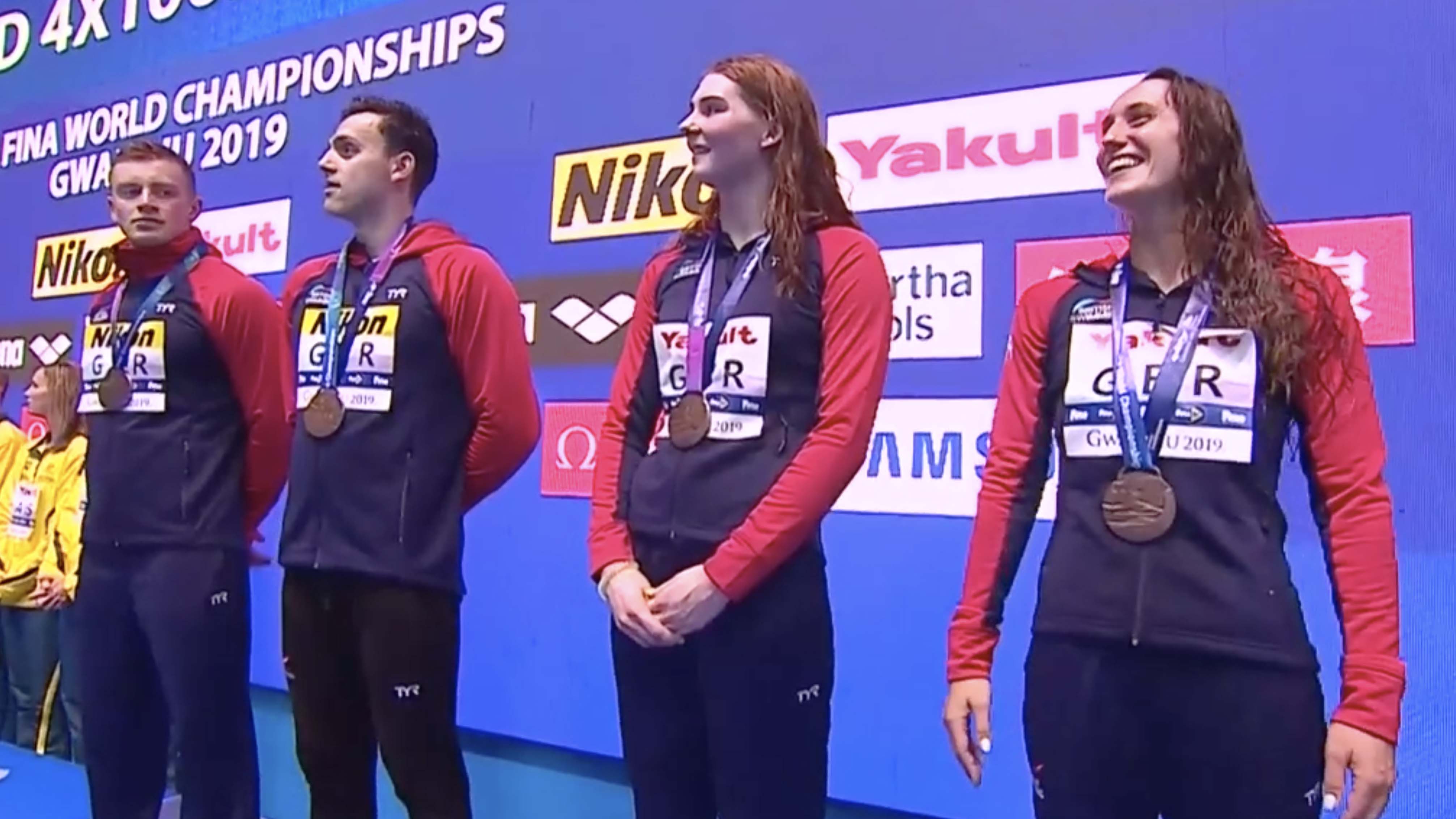 The British team were fourth after 350m but Anderson’s gutsy performance ensured she touched home ahead of Russia to seal third place.

Georgia Davies swam the first backstroke leg for Britain in 59.25 before Peaty took over and he clocked 57.73.

A butterfly leg of 57.79 from James Guy put Britain in contention of a medal and Anderson was second as she dived into the pool.

But Russia threatened to snatch a medal from the British quartert as they had dropped to fourth place with 50m to go.

Peaty said: “We’re very dominant in Europe, but obviously when it comes to the world stage we’ve got some extreme talent to go against.

“We’ve put a great job together. It’s one of those events where you don’t really know how to pace it, but we’ll have to learn for Olympics.”

Davies explained how she copes swimming against men.

She said: ”You have to see it as you’re swimming in your own lane and it’s kind of like a time trial.

“You just know that if we all individually do good splits, then we should have a good overall time.

“It’s my fourth World Champs and it’s my first medal. At the age of 28 I finally got there, with the help of these guys!”

Laura Stephens and Alys Thomas have both qualified for the Women’s 200m Butterfly final.

They both finished fourth in their respective semi-finals, with Thomas qualifying sixth fastest in 2:08.26 and Stephens eighth quickest in 2:09.06.

Stephens said: “Wow! When I looked at that time I thought there was no way, but oh my goodness!

PB for Dean as Scott qualifies

Tom Dean set a new personal best in the semi-final of the 200m Individual Medley.

Dean didn’t make the final but it’s been an impressive World Championships debut for the National Centre Bath swimmer.

He said: “The whole aim is to swim a season’s best at the main meet of the season, that’s what it’s all about.

“I knew I had to move it on from the heat and looking at my splits it was my freestyle leg that I needed to pick up and bring it home stronger than this morning, so to do that was really great.”

Duncan Scott finished second in the same semi-final as Dean to book his place in the final on Thursday 25 July.

Scott, who won a bronze medal in the Men’s 200m Freestyle, finished in 1:57.83 and qualified sixth fastest.