Freya Anderson broke her own British record in the 200m Freestyle to make it two golds in two days at the European Short Course Championships.

The 18-year-old clocked a time of 1:52.77, which was the third fastest time in the world this year for that event.

Swimming in lane six, Anderson looked confident after landing her first individual international title on day three of the championships.

As she approached the later stages of the race, the Ellesmere College Titans swimmer was in fourth place but found an extra gear to get ahead of the pack before the touch.

She said: “It’s just amazing – I really didn’t expect it. Even when I touched the wall and looked around I saw the one by my name I was like ‘what!?’.

“I’m really happy with how I managed to pace my race and come back hard on the last 50m.

“I knew how a few of the others would swim it and thought if I could be with them at around the 150m mark I could make my move.

“It’s a tactical race the 200m Free, so I had to keep looking around whilst also focusing on my own race. I’ve never been good at short course and I’ve been working on my turns and skills for years, so to finally see it paying off is really rewarding.

“The crowd were amazing and even when I finished and looked up everyone was just so happy, it was really nice to see that.

“I saw my parents in the crowd, they weren’t here yesterday, so today it was amazing to see them up there.”

Silver in the relay 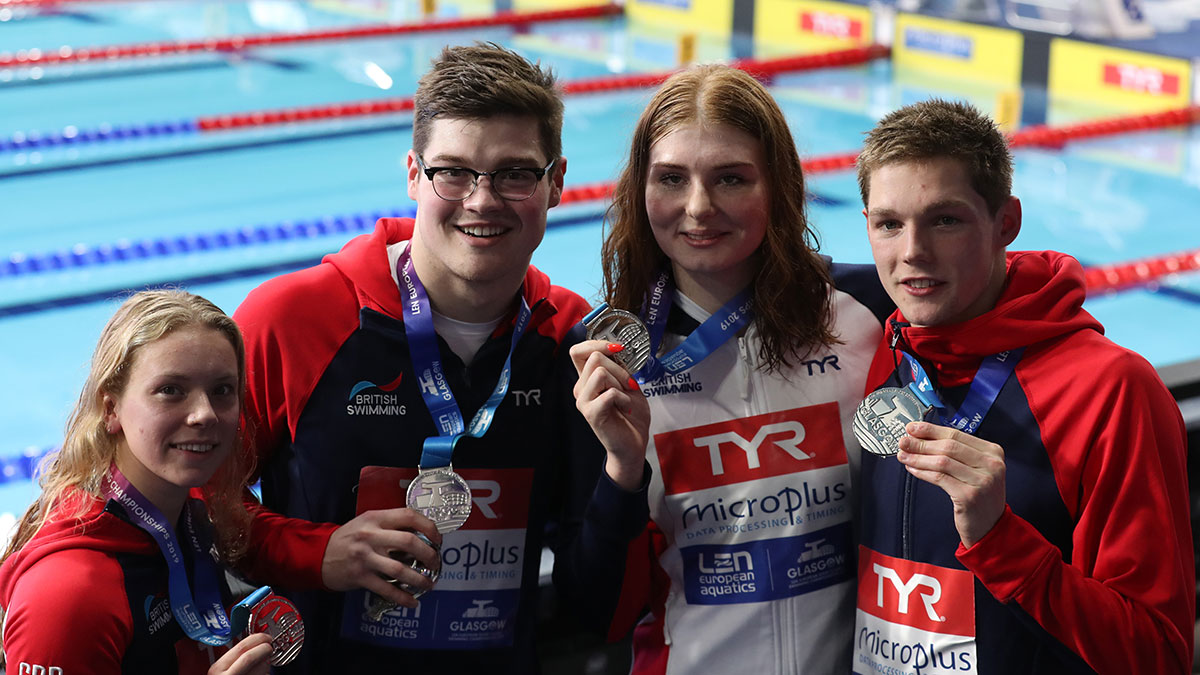 Hopkin said: “It’s great that we’ve managed to get a medal in the relay.

“We’ve come quite close each day, so it’s good to finally get on the podium.”

Siobhan-Marie O’Connor earned a podium place in the 200m IM, finishing in third.

The British record holder in this event swam the fastest qualifying time (2:08.92).

Beating that time by more than two seconds meant the 24-year-old took the bronze medal, with a time of 2:06.74.

O’Connor said: “I’m pretty happy with that! It was close at the end, but I’m happy with it.

“I haven’t been under 2.07 for a while. I could really hear the crowd and it was really nice when I walked out.

“It’s that sort of thing that when you look back on your career you’ll remember and I’ve been so blessed that throughout my career I’ve had lots of opportunities to race in front of a home crowd.

“It’s such a great feeling and it’s only when you take a step back that you can really appreciate it.”

However, O’Connor failed to qualify for the 100m Butterfly final after she finished seventh in her semi-final.

Two Brits in the final

Both Joe Lichfield and Duncan Scott qualified for the Men’s 100m IM final, which will take place on Sunday 8 December.

Litchfield’s personal best time resulted in a fourth place finish in the second semi-final after a vital touch ensured he took the last place in the final.

He beat his qualifying time (52.54 seconds) after finishing in 52.23, meaning he will be in lane eight on Sunday.

Litchfield said: “That’s another PB – I think I’ve PB’d in every race other than last night’s final!

“I’m happy with that swim – as soon as I touched I got the thumbs up from my dad in the crowd so I knew I was through.

“I don’t know what will happen tomorrow but I’m not a million miles away from anyone, so it should be a good race.”

Scott finished third in the first semi-final to qualify, after already making it into the Men’s 100m Freestyle final.