Sprint specialist Anna Hopkin admitted she had ‘exceeded her expectations’ as she claimed a second British Swimming Championships national title – and achieved a FINA World Championships consideration time in the process.

The Loughborough National Centre swimmer admitted she was ‘really happy’ after clocking 53.45 to take top spot in the Women’s 100m Freestyle ahead of a hectic year of major international events.

Hopkin got off to a flying start and was comfortably ahead at the halfway stage and held off Bath National Centre’s Freya Anderson, who was second in a time of 53.92.

The bronze medal went to University of Stirling’s Lucy Hope, who clocked 55.14.

Hopkin, who added the 100m gold to the 50m Freestyle title she won on day three of the Championships, said: “It feels amazing.

“I think that might be quicker than what I did last year at trials to qualify for the Olympics. So the fact that this year it hasn’t been the main focus and we’ve not been fully tapered, it bodes really well for the summer.

“That gives me a lot of confidence moving forward.

“You just have to take one event at a time. Worlds is first, so it’ll be taper for Worlds, go for that and then we have three weeks before Commies, so that’ll be the biggest point, how we transition from one to the next – and then Europeans after that.

“That might just be see what we have left. 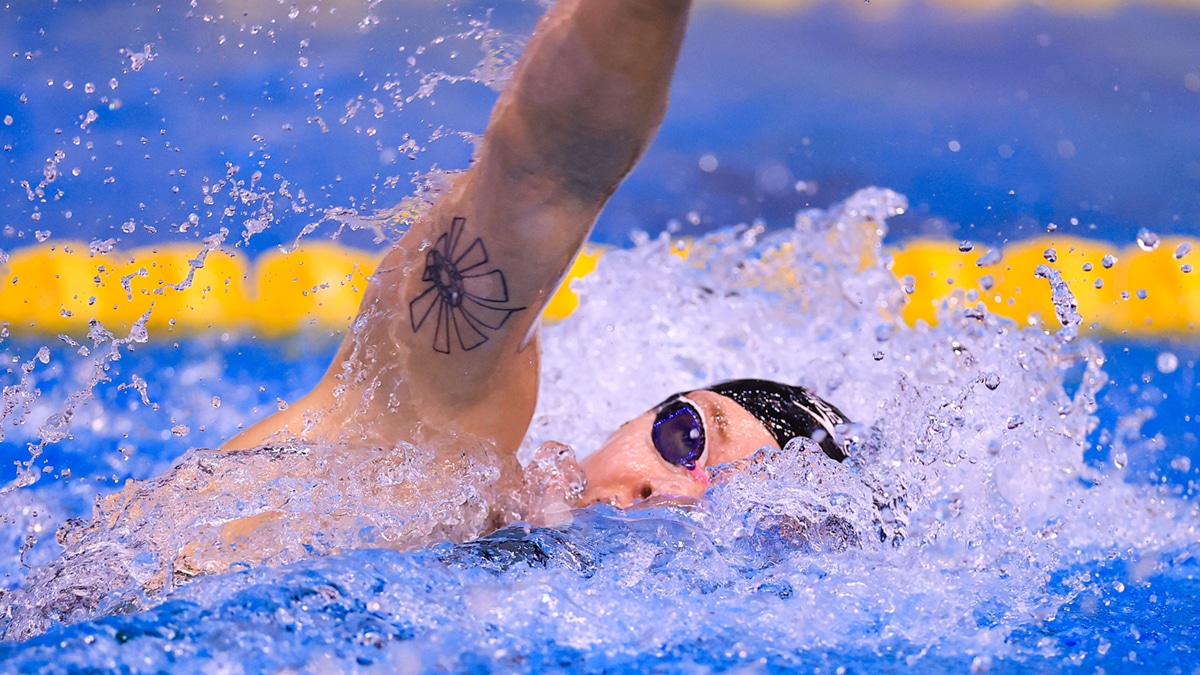 Hopkin was quick to praise her current coach Mel Marshall and former mentor Neil Harper for their role in boosting her belief and confidence.

She added: “We have such a good group (at Loughborough National Centre). It’s a small group, but everyone in there is really motivated, works really hard but we have a lot of fun as well.

“I think Mel and my previous coach Neil are probably the most motivational people I’ve had in a leadership role.

“That has helped a lot with my belief and confidence – that’s something I struggled with before. I feel a lot more confident in myself now.”

Freya Colbert continued her fine form as she won a closely-contested B Final in 55.41.

The Nova Centurion swimmer was 0.07 ahead of University of Stirling’s Emma Russell (55.48), while City of Sheffield’s Kate Clifton was third in 55.94.

In the junior final, Mount Kelly’s Hollie Widdows was first home in 56.50, while the Priority Paris race was won by Borough of Stockton’s Harriet Rogers in 56.01 – only 0.02 ahead of Sevenoaks Eva Okaro (56.03). 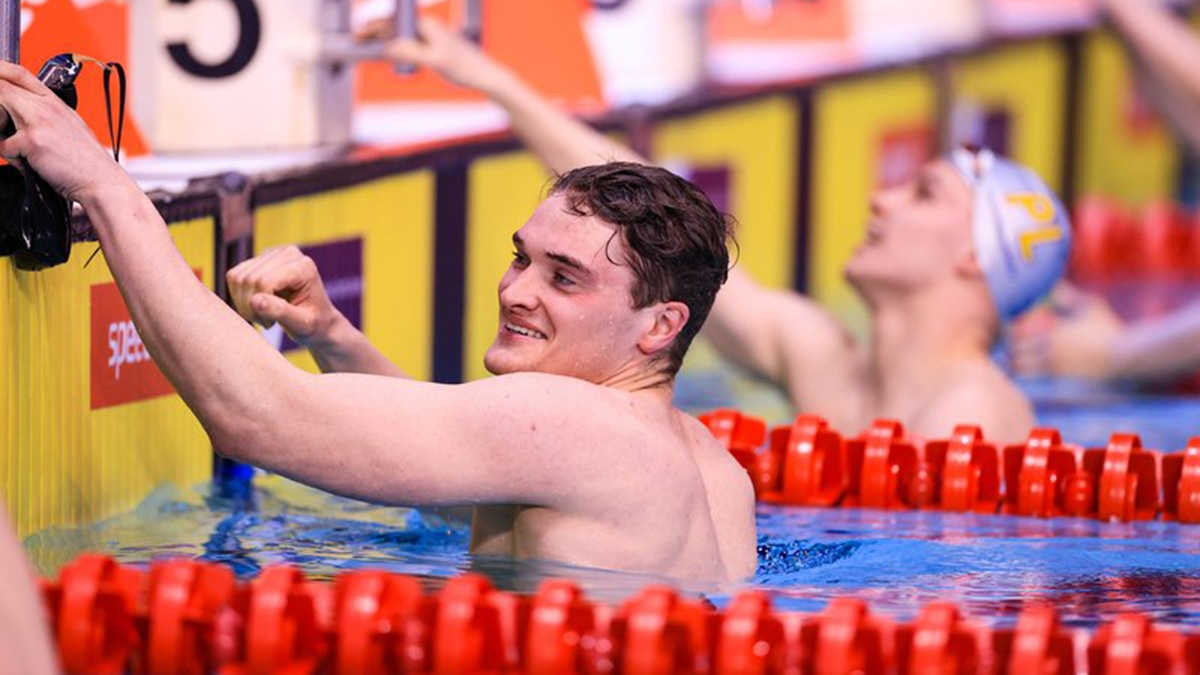 Commonwealth Games champion James Wilby went under the consideration time for Birmingham 2022 as he dominated the Men’s 200m Breaststroke race.

It was a thoroughly impressive swim from Wilby, who triumphed by by 2.69 seconds as he clocked 2:09.48 to finish comfortably ahead of Plymouth Leander’s Adam Chillingworth and Loughborough National Centre’s Gregory Butler.

He said: “I’d had enough rest to put in some fast swims, but our priority is we want to swim fast because it’s first time we’ve done something fast since the summer, but at the same time, it’s a shortened cycle between now and World Champs.

“So it’s not a full rest because we can’t afford to have that time of getting back to it. So it’s basically a little dip in the training load to get us swimming fast here.”

Chillingworth and Butler were involved in a real fight for second spot with the Plymouth Leander swimmer taking the silver in a time of 2:12.17 – 0.13 ahead of Butler who clocked 2:12.30.

City of Leicester’s Alexander Casey clocked 2:19.09 to take first in the junior race, while the Priority Paris final was won by City of Hereford’s Oscar Bilbao in 2:18.33.

James Guy had achieved the Birmingham 2022 Commonwealth Games consideration time in the morning’s heat as he qualified quickest for the final in 51.68.

And he took the British title from his Bath National Centre team-mate Jacob Peters in 51.69 – narrowly outside a FINA World Championships consideration time.

Guy showed his class as he went out quicker in the first 50m than his morning’s heat and had done enough to touch home first by 0.24 seconds.

Peters had to settle for the silver in a time of 51.93, while City of Manchester Aquatics’ Jamie Ingram was third in 52.46.

Guy said: “I think, compared to this morning, I over-revved a bit – it was more in the first half, a relaxed swim.

“I probably got a bit excited at the front and haven’t quite the speed I’d like to have.

“But it’s just finding that balance of where you are. It’s very similar to last year at trials, I was 51.4 and then dropped 0.5 at Europeans a month later.

“It wasn’t a bad swim, I’d have liked to have gone a bit faster but it’s job done. Trials is get the ticket and move forward.”

Edinburgh University’s Archie Goodburn clocked 54.19 to take top spot in the B Final, by 0.17 seconds from Millfield’s Evan Jones (54.36).

In the Priority Paris final, City of Sheffield’s Aaron Fox delighted the home crowd by winning in 54.94, while City of Manchester Aquatic’s Rueben Rowbotham-Keating was victorious in the junior race in 55.15.

Katie Shanahan produced a thrilling comeback to be crowned British champion with a late surge in the Women’s 200m Backstroke.

Osrin had to settle for the bronze medal as the Loughborough University swimmer clocked 2:12.12.

Shanahan, who said: “I’m really happy with that.

“That’s my first senior national title. I knew I had to put on a good race with the girls because I knew they’d come back strong.

“I definitely could see all the girls coming for me. That last 5m, I tried to hold my ground and push as hard as I could to the wall, because Hollie is such a good talent, she got a massive PB there. I’ve still got the 200m IM tomorrow, we’ll see how that goes.”

Newcastle’s Amelia Robertson was the winner of the Priority Paris race in a time of 2:15.62, while Annabelle Wilkinson was the first home in the junior event after recording 2:17.24.