Winchester’s Lewis Burras found ‘something special’ to finish just outside the British record time and be crowned British champion on day three in Sheffield.

The Men’s 100m Freestyle final saw a field stacked full of talent and Burras stood out as he swam a superb time of 47.88.

He finished just 0.01 outside Duncan Scott’s record in what was an emotional victory for the 22-year-old.

Camden Swiss swimmer Michael Klimaszewski finished on top in the junior final with his time of 51.67 and City of Manchester’s Jamie Ingram (49.85) was the gold medallist in the B final.

“I took it out hard, I had to attack my turn, hit my kicks and keep the breathing pattern going. A big focus was trying to stay in the middle of the lane, and not let either Tom or Jacob ride that wave home.

“I got to the 10m mark and told myself, ‘pain is temporary’, and that helped me get my head down.

“These guys are some of the best swimmers in the world, I’ve been lucky enough to swim with Tom on a junior team, with Brodie Williams – and to see them there in Tokyo, I knew I had let myself down in a way. But it has definitely given me some fire to push on in this cycle.” 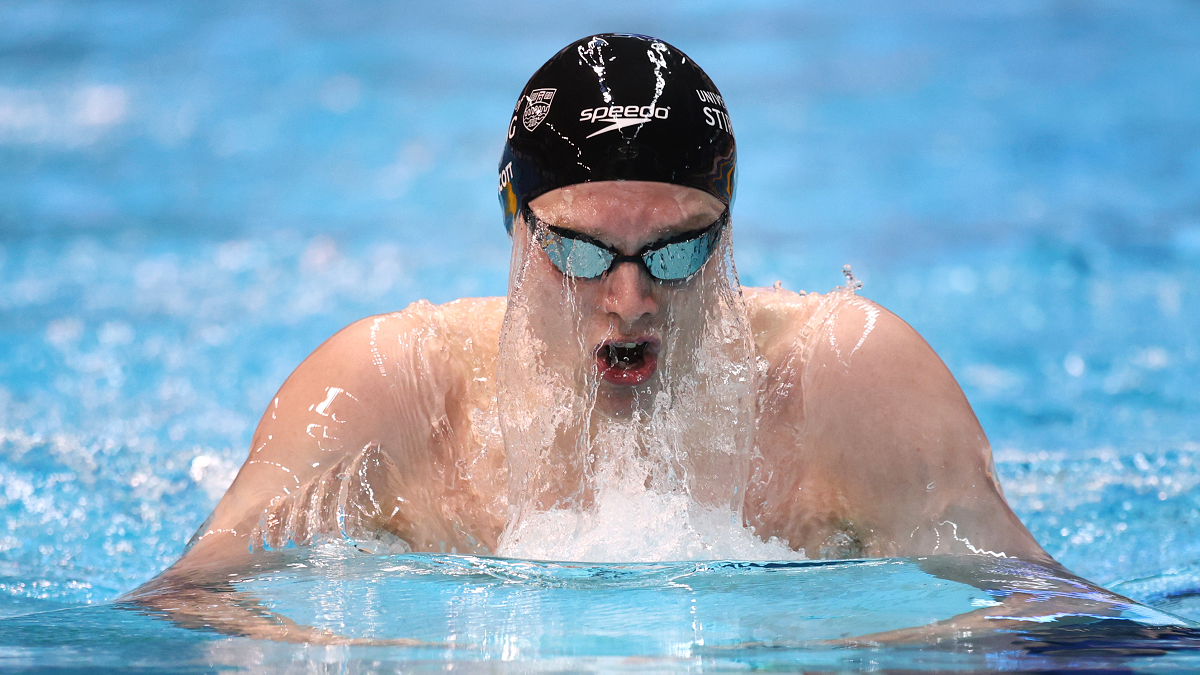 Momentarily before he almost had a British record taken away, Scott added another to his tally in the Men’s 400m Individual Medley final.

The University of Stirling swimmer set a new record time of 4:09.18, which would have been quick enough to win gold at the Tokyo Olympics, as he raced away to another title.

The 24-year-old battled it out with Bath National Centre’s Brodie Williams in the early stages, but it was Scott who opened up the gap in a powerful end to the race.

He lowered the record by 0.44. It was previously held by Max Litchfield (4:09.62 since the 2017 FINA World Championships in Budapest.

Williams held on to take the second spot on the podium followed by Bath University’s Jacob Greenow in third.

On his performance, Scott said: “I’m still learning the event a lot, but I’m absolutely delighted with that time.

“I love watching Max [Litchfield] do that every year, the times he’s able to do consistently each year, around that 4.10 barrier, it’s incredible.

“I’m delighted to get that off him, I’m quite happy with that, I’ll look back and I’m sure there are many areas for me to improve on – but I’m really happy with that.

Scott also holds the British records in the 100m and 200m Freestyle as well as the 200m Individual Medley.

On adding a fourth record to his tally, he said: “That’s because people keep taking them off me! I have to hold my 100m Free status tonight.

“That was an added incentive of me getting the 400m IM because I might get one taken off me tonight.

“I guess that’s why they are there, it’s good to see them keep going in different events all the time. I guess it shows the depth we have now in Britain, that there are so many people close to all the British records.”

There were also some phenomenal swims in the B final and junior final, seeing significant drops in times from the heats earlier in the day.

It was a close finish in the B final but Loughborough University’s Ben Harrison took the win and progressed his time by around five seconds to finish in 4:25.12.

Taunton Deane’s Oscar Barlow secured the gold medal in the junior final after touching the wall in 4:29.45 – which was almost nine seconds quicker than he went in the heats.

Ipswich swimmer Joe Cooper managed a time of 4:33.67 for second place and City of Liverpool’s Vadim Bosc finished third in 4:34.14. 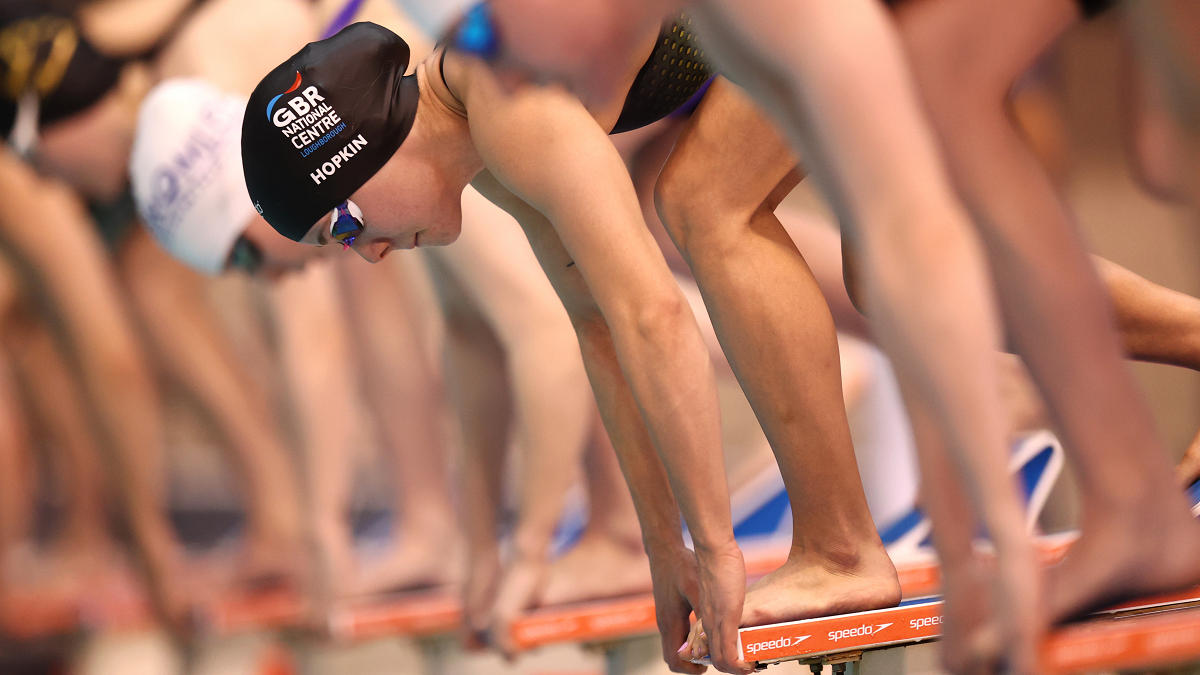 Anna Hopkin earned the title of British champion in the Women’s 50m Freestyle final as she dropped under the 25 second-mark.

The Loughborough swimmer powered down the centre of the pool to touch the wall first in the traditional ‘splash and dash’ race, with a time of 24.85.

Isabella Hindley of Brompton was next up to secure the silver medal position in a time of 25.25. She finished 0.14 ahead of Bromley’s Evelyn Davis (25.39) who was third on the podium.

In the B final, Harriet Rogers was first to the touch in a time of 25.76. Taking the silver medal was City of Cardiff’s Harriet Jones (25.79) and Mount Kelly’s Erin Little (25.83) was the bronze medallist.

Mount Kelly also had medal success in the junior final as Hollie Widdows was crowned champion with a time of 26.14. She beat Basildon’s Skye Carter (26.48) to the touch and her teammate Josephine Klein took third in 26.59.

Hopkin said: “I had COVID last week, so that was a bit of a bump in the road!

“I got it last Wednesday, it was mainly just a cold but I had to have a few days out of the water, and then getting back in has felt lethargic.

“Monday was the first day I started to feel back to myself, which means it was quite a quick turnaround coming into this.

“This wasn’t the focal meet anyway, obviously I’ve got a really busy summer, so throwing that into the mix as well, it’s been a pretty uncertain week – but I’m pretty happy with how I’ve swum, considering.

“At the min I’ve qualified as a relay swimmer, so obviously I still need to prove myself individually. Hopefully over the coming months, when we do more comps, I can prove myself more than now.

“It’s a bit of a different year to last year, so hopefully there is more to come in the summer.

“This whole year has been quite busy, I only took two weeks off after Olympics then straight off into ISL, which was busy – and I had a lot of media stuff straight after Tokyo, so it all felt like a bit of a whirlwind.

“At the moment, I feel I have momentum going through, but I think after the summer, I’m going to need a decent break this year, because then it’s two years to Paris and that’s when we really need to refresh and be a bit more fresh in the mind as well.

“I’ve just got to push through this year, try to build on what I did last summer, then take a good break after the summer and come back through for Paris.”

Hopkin was also presented with her world record certificate alongside Adam Peaty, James Guy and Kathleen Dawson for their record-breaking Mixed 4x100m Medley Relay swim at the Tokyo Olympics.

She added: “My mum and dad are here, they obviously couldn’t watch me live at the Olympics. For them to see that presentation will mean a lot.

“They were gutted they couldn’t be out there, they’d have 100 per cent been there. So it’s nice they can feel a part of it here now.”

Laura Stephens executed a strong race in the Women’s 200m Butterfly final to be crowned as British champion.

The Loughborough National Centre swimmer’s time of 2:08.11 was just outside the consideration time for the World Championships, but she has her eyes set on upcoming competitions to hopefully change that.

University of Stirling’s Keanna Macinnes (2:10.02) was next to touch, followed by Holly Hibbott (2:10.27) of the Bath National Centre.

After her win, Stephens said: “It’s been a bit of a rocky season so far, coming off the back of the Olympics and the ISL – preparation hasn’t been 100 per cent smooth.

“So with what we’ve had, I’m really happy with that swim and to be there, especially after transitioning programmes [from Plymouth Leander to Loughborough National Centre], it’s a really promising start.

“That transition has been really good. I’m so happy working with Dave, he’s been great so far and I’m just really excited to see what we can do this summer.”

In the B final, it was close between Plymouth Leander’s Sophie Freeman and Northampton’s Betsy Wizard.

The two were head-to-head but a turn of pace from Freeman down the final 50m saw her finish a second ahead.

Phoebe Cooper set a new personal best by around two and a half seconds to win the junior final.

Swansea University’s Daniel Jervis gradually opened up a strong lead in the Men’s 1500m Freestyle to take another British title.

The 25-year-old, who finished fifth in the same event at the Tokyo Olympics, said he is in the ‘best shape of his life’ but thought his performance on the night could have been better.