Team England added another six medals to their tally after an exceptional night in the pool on day five of the Commonwealth Games in Birmingham.

The night got off to an incredible start as Brodie Williams took gold in the Men’s 200m Backstroke final in just the second event of the evening.

Adam Peaty then bounced back in some style to take his fourth Commonwealth Games gold by winning the Men’s 50m Breaststroke title.

Stephens gave it her all and led at the halfway stage as she got stronger in the middle part of the race.

With 50m to go, she was 0.01 ahead of Australia’s Elizabeth Deckers but just lost out in the race to the wall as the Australian took the gold.

On her performance, Stephens thanked her coach David Hemmings for helping her get to this level.

“This means the world to me. It feels like I have been scraping so many finals and not quite been able to get that individual medal.

“I am over the moon to have come away with my first major meet individual medal.

“So much hard work has gone into this.

“It’s been a really big season for me, I’ve switched programmes and I’m now working with David Hemmings and he’s been absolutely key for me and to all this.

“I think it shows a really promising future.”

The British Performance Centre swimmer battled hard all the way to the end and believes this is a breakthrough swim in her career.

She said: “I knew I had Elizabeth (Deckers) next to me.

“I kept my eye on her and knew if I kept myself in a good position at 150m then I could hammer down the last 50 and hold on.”

“I think just being more relaxed and coming out here now, I’ve done all levels of competition after the Olympics last summer.

“It feels like now I’m coming round to my second Commonwealth Games and I’m more relaxed and more confident in my abilities and I think that definitely made a difference tonight.

“This means so much – it’s my breakthrough swim, and hopefully a good career for me now on the international stage.”

Hibbott finished in a time of 2:09.92 which was 2.66 seconds off the winner as she fell just short of the medal places. 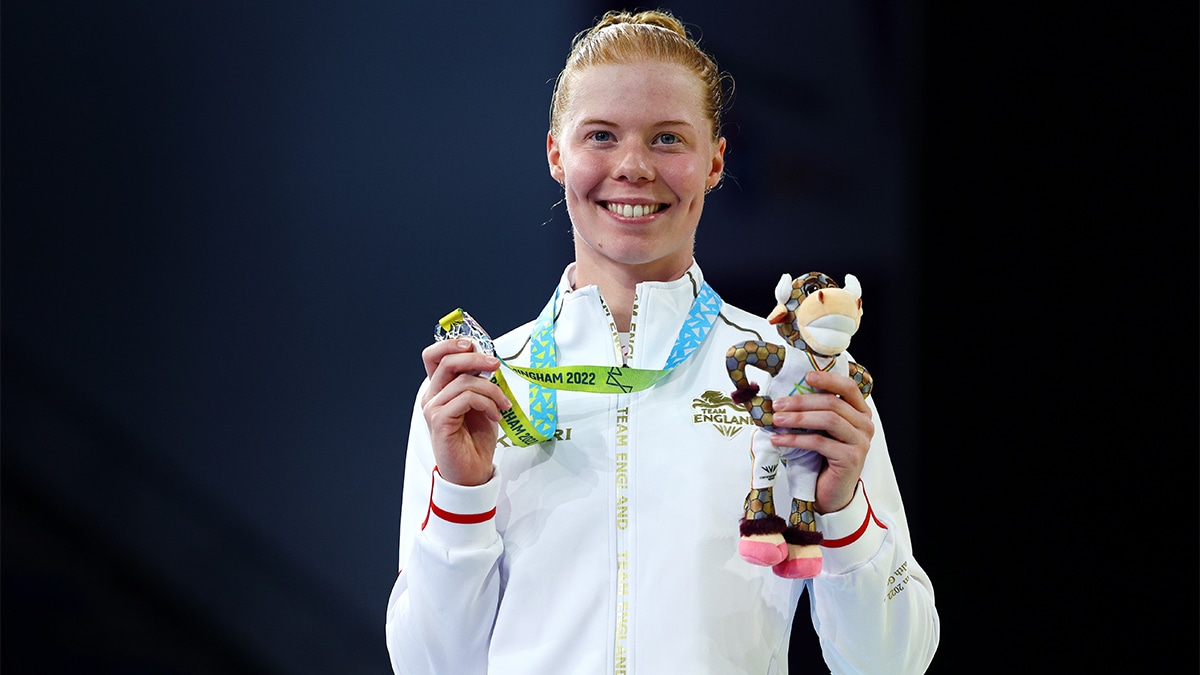 Guy adds to his collection with Butterfly silver

James Guy got his first medal of the night as he took silver in the Men’s 100m Butterfly.

The Bath swimmer finished joint second with a time of 51.40 that was equal with Australia’s Matthew Temple.

The pair fell just short of the gold however with Canada’s Joshua Liendo Edwards continuing his fine meet so far as the 19-year old won gold in a time of 51.24.

On the performance Guy said: “It was a really good race.

“The butterfly swim was quite hard but 51:04 is the fastest I’ve been all season. My 100m butterfly hasn’t really been there.

“The main goal this year was to focus on 200m butterfly and that showed at the worlds but I’ll take a silver medal at the Commonwealth Games.”

Guy claimed that his tactics have been what’s given him the chance of his medals so far at the games.

“The meet so far has been quite different. My times haven’t been that fast to win but tactically it’s been about how we get a hand onto the podium.

“The way I did it tonight was to come back like an absolute steam train.”

“You’ve got to change the way you swim things and tonight it worked.”

Jacob Peters and Jamie Ingram also competed in the final for Team England with Peters’ finishing sixth and Ingram eighth.

The pair were both in touch with the pack as Peters finished just under a second off Edwards with Ingram not much further back in a competitive race. 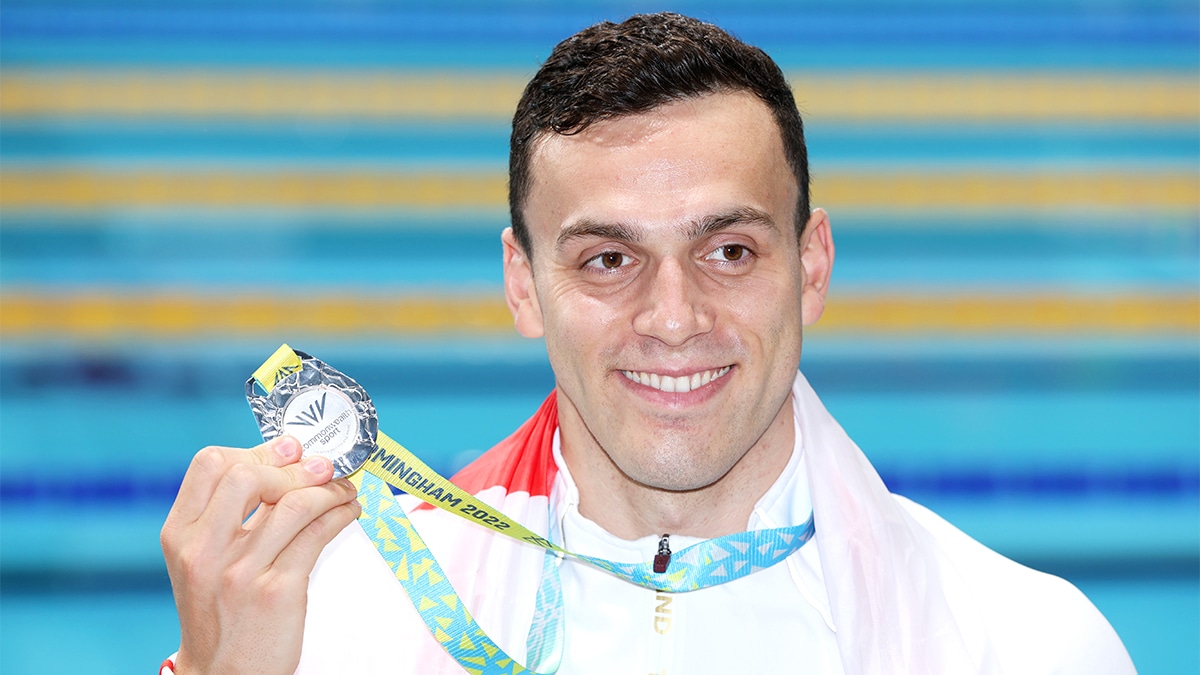 Hollis comes out of retirement to win bronze

James Hollis added to an impressive week for England’s para-swimmers with bronze in the Men’s 100m Butterfly S10 final.

Hollis specifically came out of retirement for these Commonwealth Games and is return to the pool has paid off as he took the final spot on the podium with a time of 58.55.

Hollis was delighted with his medal saying after the race: “It’s my first ever individual international medal so to do it here, in front of a home crowd, I couldn’t ask for much more.”

He revealed he had been tempted to come out of retirement after seeing his event be included in a home Games –and he praised the crowd for spurring him on.

Hollis said: “Thinking back to London [2012 Paralympic Games] I had the pleasure of a home crowd there. “When I saw my event was to be at another home Games,I had to give it a shot.

“I’ve put everything on the line this year. I knew a medal was possible and that I was never going to give up with that crowd behind me.

“I was too young in London to take it all in and understand what was happening really.

“The crowd were amazing. Ben Proud said it earlier in the week, that you can hear them when you’re swimming.

“I’ve never had that before. In those last 10 metres, when my arms stopped working, I thought, ‘I can’t let them down, they’re cheering louder, I must be in with a chance’.”

Hollis says he will enjoy the moment before deciding whether to carry on swimming competitively at international level.

He added: “I’m just going to take all this in at the moment and enjoy this experience and the next few weeks I’ll sit down and decide what the future might look like.

“I’ve always wanted an individual major medal so I’ve got that now. It wouldn’t be bad way to finish.

“If I carry on it means I want more.” 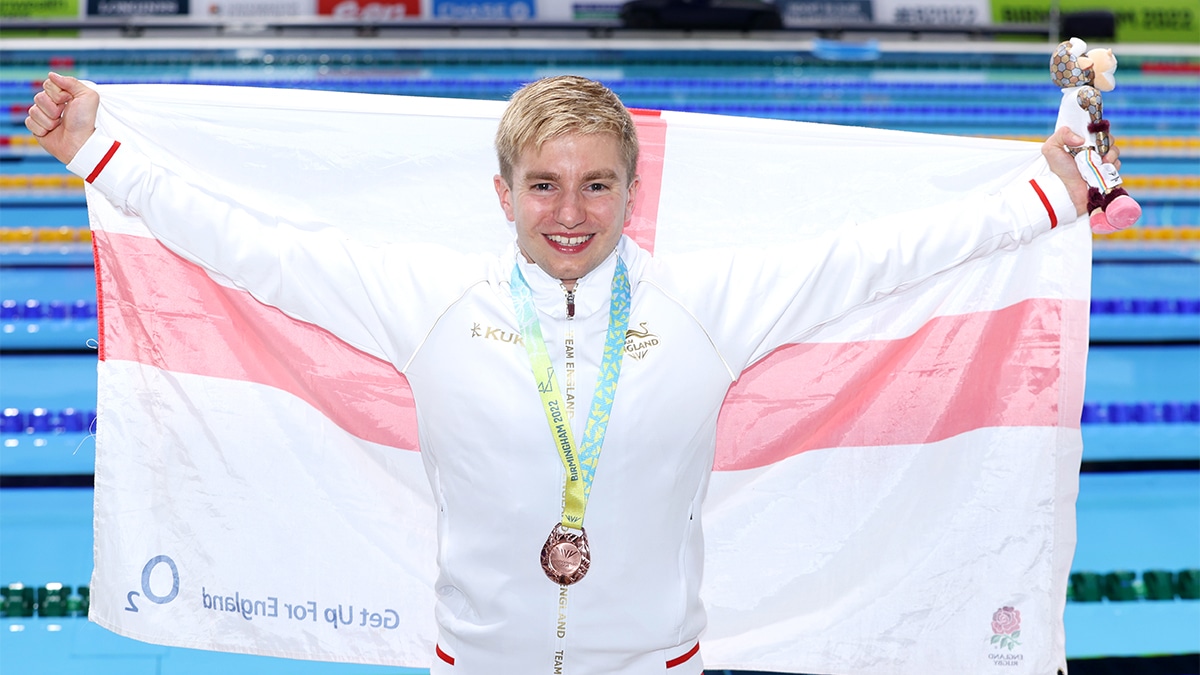 Anderson was a little disheartened to have been pipped to the silver medal by just 0.05 but was still happy to come away with a medal and make the crowd and her teammates proud.

The Team England swimmers recorded a time of 3:44.03 to finish in the final podium place.
Cox took on the opening leg and swam a 1:00.81, with Wilby up next and recording a 58.94 down the second leg.

All members of the relay quartet had also swam an individual event in this evening’s session, witj Wilby saying: “It’s challenging, we’ve all had individuals this evening but we’re here, we’re putting in a big effort for the team and that’s really important.

“Freya – absolute champion back 50 even though she might be a bit gutted about it but, it’s putting in that last little bit of effort, right when it really matters, for the team and getting on that podium.
“We should be really proud of that in front of a home crowd.”

After winning her first Commonwealth medal, Cox added: “I really enjoyed it. It hurt a lot having the 50 so close but it was really good.

“It’s given me a lot of confidence, a lot of experience as well, a lot of learning. I’m sure I’ll be able to implement everything I’ve learnt going forwards.” 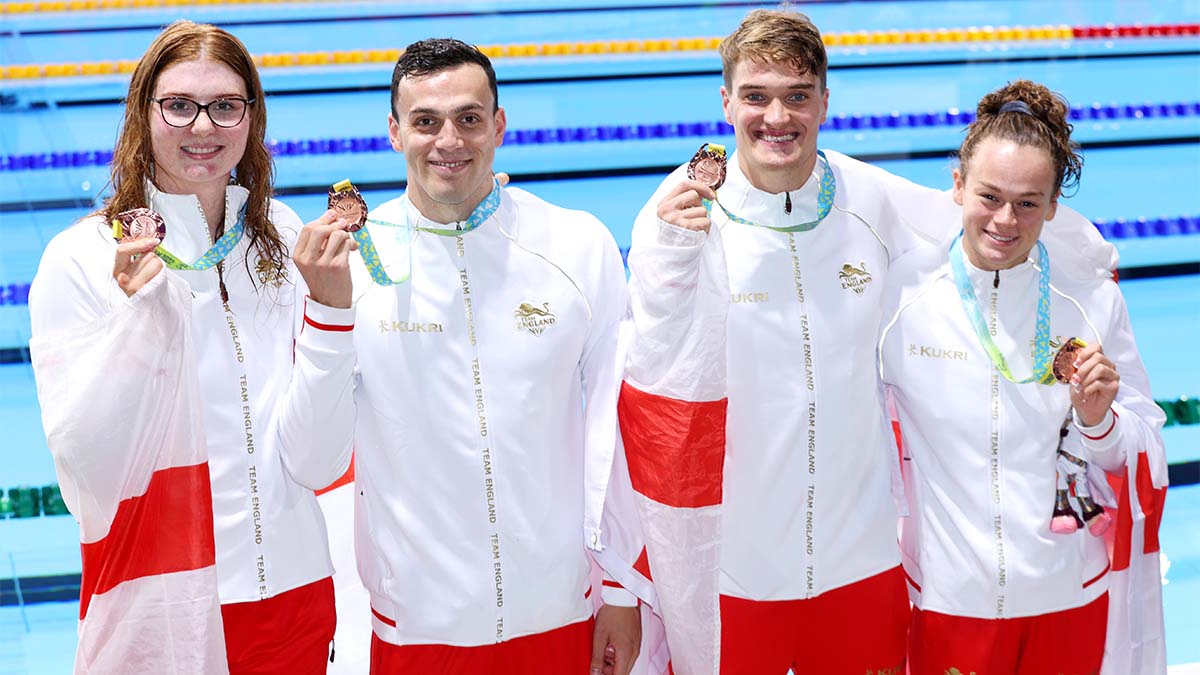 Hopkin and Anderson so close to a medal

Anna Hopkin and Freya Anderson both just missed out on a medal after finishing fourth and fifth respectively in the Women’s 100m Freestyle final.

The English duo battled with the Australian’s throughout the contest but couldn’t quite get amongst the medal places as Australia took all three spots on the podium.

Hopkin came closest of the English pair, setting a time of 53.57 which was less than a second off the winning time.

Anderson wasn’t much further back, setting a 54.00 in another good display from the Bath National Centre swimmer.

Taking the gold was Mollie O’Callaghan in a time of 52.63.

A gutsy swim from Molly Renshaw saw her finish fourth in the Women’s 100m Breaststroke final.

She set a time of 1:07.36 as the Loughborough based swimmer finished just 1.89 off the South Africa’s Lara Van Niekerk who took the title.

Renshaw was in the race for the medals right to the end as she pressed hard in the closing stages to chase down Australia’s Chelsea Hodges for the bronze medal spot.

Unfortunately, she just missed out by 0.31 despite her impressive performance.

Ben Proud qualified fastest for the Men’s 50m Freestyle final as the World Champion looks to add to the 50m Freestyle Commonwealth Games title to his ever growing list of accolades.

Just behind Proud was Lewis Burras who was joint second with a time of 21.92 as the pair look set to battle it out for the medals tomorrow.

Adam Barrett couldn’t add to his 50m Butterfly final from earlier in the week as he ended 16th fastest with a time of 22.86.

There was individual success for Lauren Cox too on day five as she will look forward to tomorrow’s Women’s 50m Backstroke final.

She qualified as the sixth fastest swimmer with a time of 27.91 that was just 0.44 off Canada’s Kylie Masse who set a new games record in the semi-finals to go fastest with a 27.47.

Isabella Hindley just missed out on a place in the final after finishing 13th fastest with a time of 29.75.