Team England added a further five medals to their Commonwealth Games tally – as Tom Dean won his fourth and fifth silvers of Birmingham 2022.

Abbie Wood also won her fourth medal of the Games – and her first individual gong – as she took bronze in the Women’s 200m Individual Medley.

Maisie Summers-Newton claimed Team England’s only gold in the pool on day four in the Women’s 100m Breaststroke SB6 – and was joined on the podium by Grace Harvey, who finished second. 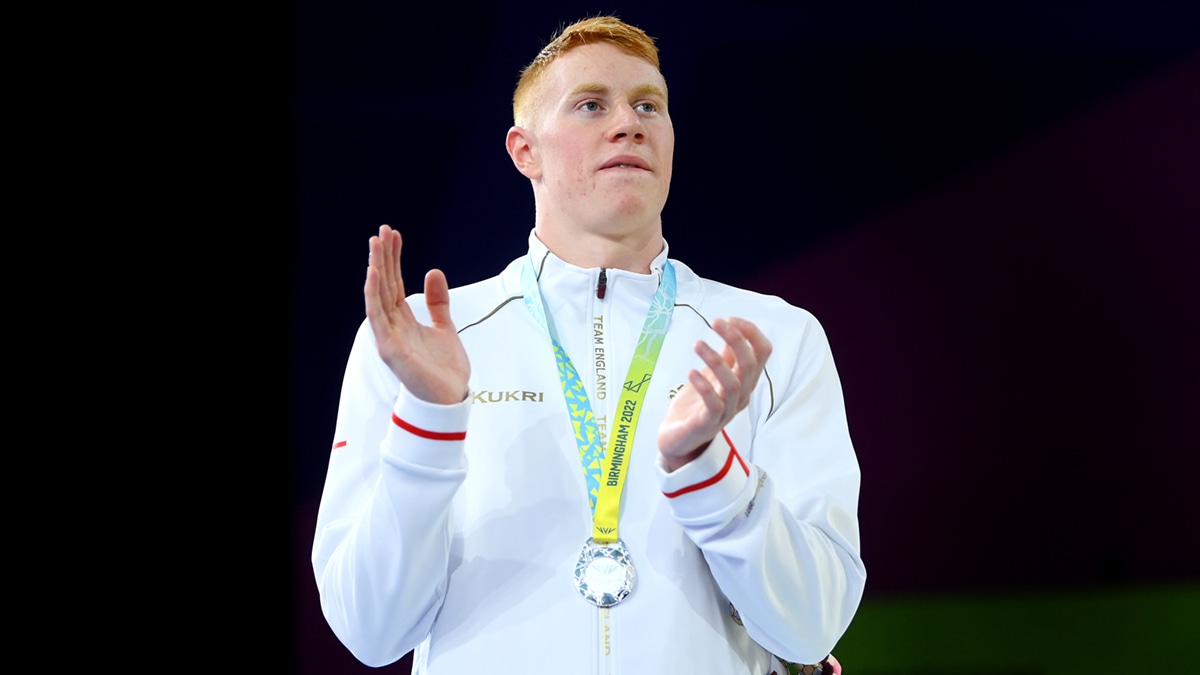 Dean admitted he was ‘really happy’ with his fourth medal of the Games after finishing second in the Men’s 100m Freestyle – the night’s first race.

After taking second in the 200m Freestyle behind his good friend Duncan Scott, Dean finished one place ahead of the Scotsman but agonisingly just behind Australia’s Kyle Chalmers.

Dean had set a new personal best of 47.83 in the semi-final and he was narrowly outside that after clocking 47.89 on his way to second place.

He was third at the turn but roared on by the Sandwell crowd, he grabbed second and finished only 0.38 behind Chalmers.

Dean said: “Yeah, really happy with that – another silver medal.

“You can never complain about a medal on the international stage, sharing the podium with some of the best athletes in the sport.

“They’re both two incredible sprinters so I’m in great company.

“It’s almost not to do with times but purely a racing meet. At the World Championships, it’s all about who can do the fastest time, but here it’s got a different competitive energy to it.

“I haven’t been focusing too much on times. It’s just an excuse to try a race plan, a race strategy.

“Four Commonwealth medals isn’t a setback. On top of that it is a stepping stone towards the Olympics.

While the Commonwealth Games is important, the Olympics takes precedence in terms of our competitive schedule.

“I’m looking at 40 races almost in the space of two months but we’re doing it now to home in on Paris.”

Jacob Whittle improved on his semi-final time as he finished sixth. 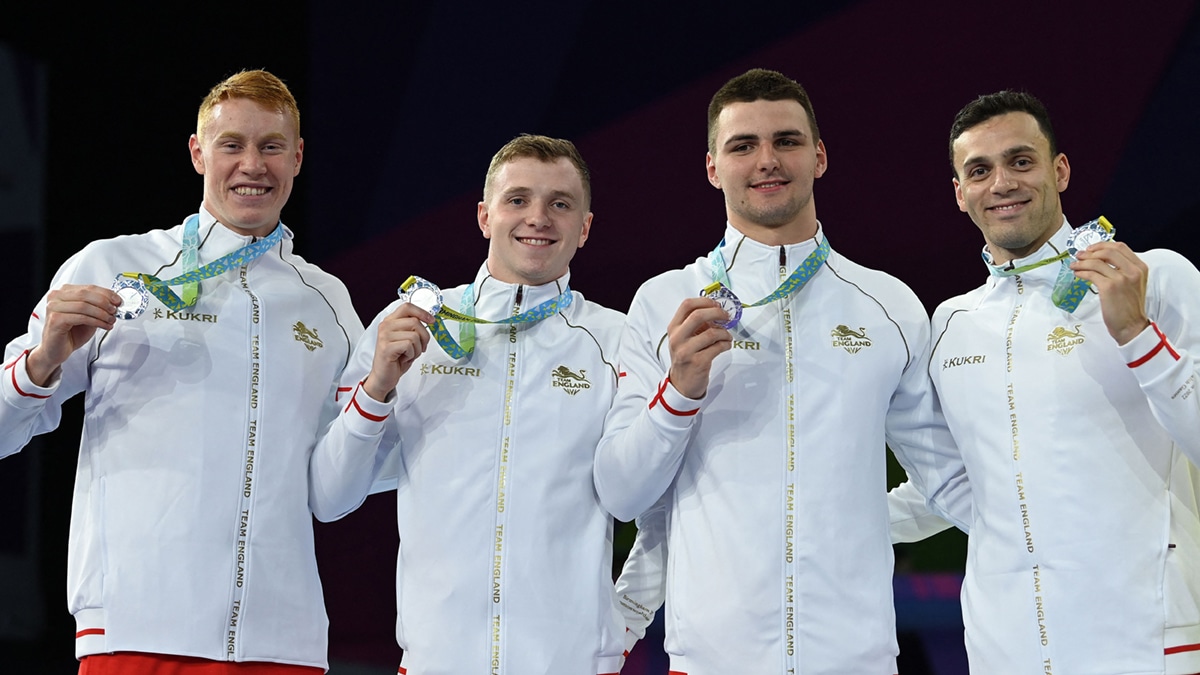 The team of James Guy, Jacob Whittle, Joe Litchfield and Tom Dean set a time of 7:07.50 that was just 2.54 off the Australian’s who set a new Commonwealth Games record to take the gold.

Guy started things off for England and kept within half a second of the leaders in a close fought start to the race.

Whittle was in the pool next and battled hard against the rallying South Africa and Wales teams to keep England within touching distance of the medal places.

He passed over to Litchfield who came out of the blocks quickly to push England back into second place and clear of the rest of the pack.

Australia were strong in the middle two legs however and took out a four second lead before Dean entered the pool for the anchor leg.

Dean gave it everything he had to close the gap but could only bring it down to 2.54 despite an impressive swim as he claimed his fifth silver medal of this years games.

Australia’s record time of a 7:04.96 was the only thing that could stop England as they held a near two second gap back to Scotland who snatched the bronze medal off Wales in the closing stages.

On competing at the games and winning silver Litchfield said “It’s been pretty surreal.

“I am 24 now and I feel like I’m still a reasonably inexperienced swimmer on the team.

“So going into worlds in the final I was getting behind the block and I was like, ‘Wow, I’m in a final, I’m ready to swim’.

“This has been a year of ups and downs. At one point at trials I didn’t even think I was going to make Commonwealths.

“One swim at the end of the week – the 200 freestyle – I snuck myself on the team and it’s gone from barely making the team to world bronze to Commonwealth silver.” 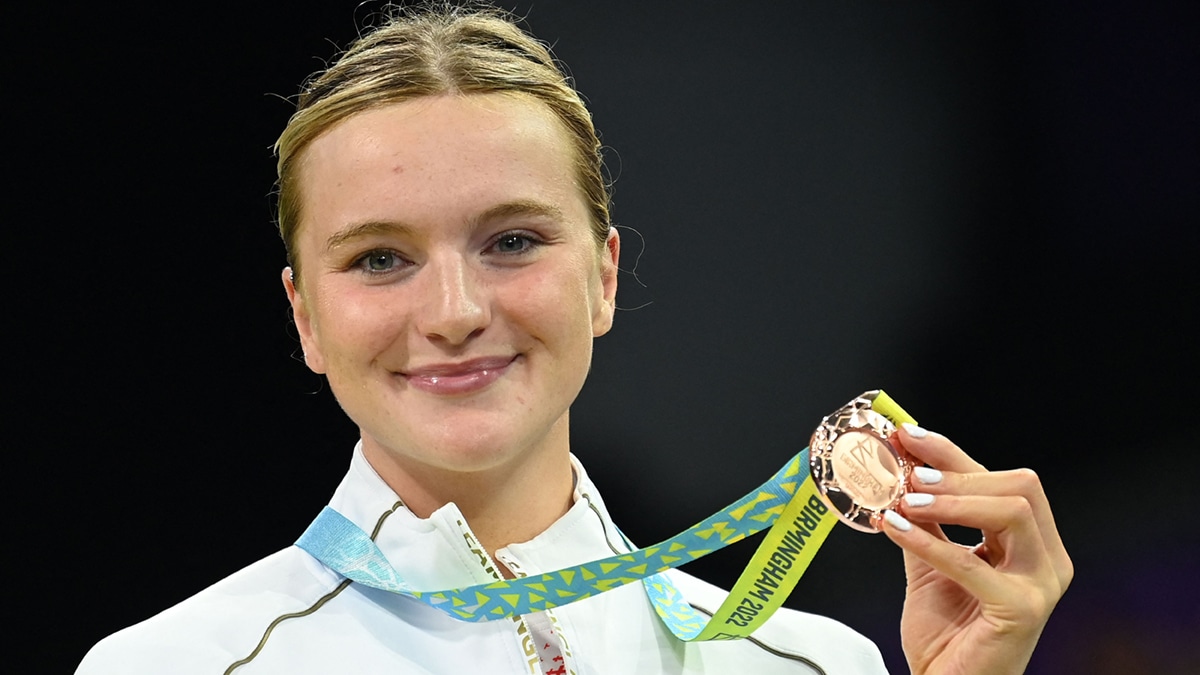 Abbie Wood felt a ‘weight had been lifted from her shoulders’ after picked up her first individual medal of the Commonwealth Games.

Wood secured her fourth medal of Birmingham 2022 as she bagged bronze with a season best time in the Women’s 200m Individual Medley.

The 23-year-old finished fourth in the rearranged Tokyo 2020 Olympic Games in the same race but comfortably took third in a time of 2:10.68, finishing behind Canada’s Summer McIntosh and Australia’s Kaylee McKeon.

Wood said: “I feel like such a weight has been lifted off my shoulders.

“I just wanted to get my hand on the wall for a medal. After the season I’ve had, I’m really happy with that – such a sigh of relief.

“It’s a good step in my confidence that I can do it in front of a crowd and I’m excited for what’s to come.

“It’s a season’s best and I couldn’t ask for any more after such a hard cycle after the Olympics. Coming fourth there really had a hit on me so I’ve been really happy just to get it together for this week.

“I didn’t give myself a break so I’m definitely having a nice break after this Commonwealth Games, celebrating with my family.”

Alicia Wilson finished in seventh place, finishing in a time of 2:14.08.

Jones and Perry give it their all

Michael Jones and Will Perry put everything into their Men’s 50m Freestyle final S7 but finished fourth and eighth respectively.

Jones was just 1.17 off the bronze medal place as he pushed hard to close down the leaders in the second half of the race.

He made up a number of positions in the final 25m’s but just didn’t have enough to push himself onto the podium.

Perry finished eighth and was extremely competitive despite swimming up a class.

The Northampton para-swimmer is an S6 swimmer but stepped up specifically to compete at these games and was 4.23 off the winner and within touching distance of the rest of the pack.

England’s duo enjoyed their time in the arena, with Jones saying the Sandwell crowd blew him away.

On the support from the fans he said: “I’ve never had nothing as incredible as that. Rio was a great atmosphere but that was unparalleled, it was something completely different.

“You prepare for it mentally and then it just blows you away completely.”

Perry also hailed the crowd but admitted he could’ve gone faster if it wasn’t for an issue with his race suit.

“I made it (the race) even more difficult for myself.

“As I went to go get changed I found out I’d left both race suits in my hotel room with about half an hour to go.

“Luckily we had a spare but that’s something I hadn’t accounted for and my mind wasn’t quite in the right place and I was a bit all over the place.

“Racing in front of a crowd like that however just made it all better.”

Team England will have three swimmers battling for the medals in the Men’s 50m Breaststroke final tomorrow night.

Less than 24 hours after James Wilby won gold in the 100m race, he booked his pace in the 50m final alongside Adam Peaty and Greg Butler.

Peaty qualified second fastest in a time of 27.03 – only 0.02 behind Australian Sam Williamson who pipped him to the bronze in a dramatic finish to the 100m event.

Hopkin and Anderson go through

Only 1.03 seconds separated the top five with Hopkin clocking 53.96 and Anderson 54.15 to set up the prospect of a thrilling final on Tuesday evening.

Isabella Hindley is the first reserve for that final after finishing ninth overall in a time of 55.60 – 0.19 behind the eight quickest qualifier.

Three from three in Butterfly semi-finals

James Guy, Jamie Ingram and Jacob Peters all qualified for the Men’s 100m Butterfly final after impressive semi-final swims from the English trio.

Ingram came through second fastest from the heats this morning and competed alongside Guy in the first of the two semi-finals.

The City of Manchester swimmer set a new personal best in the heats and almost matched that time in the semi-finals with a 52.27.

Guy went quicker than Ingram on this occasion however, knocking 0.67 off his time in the heats to set a 51.82 that saw him qualify third fastest overall.

Ingram finished fourth in the opening semi-final and faced an anxious wait to see if he would make it into tomorrow’s final.

Peters was a part of that second semi-final and also finished fourth in his race going slightly quicker than Ingram with a 52.23.

The times were enough for the English duo however as they came through as the seventh and eighth fastest qualifiers to book their place in the final.