Jay Lelliott led from start to finish as he reclaimed the Men’s 400m Freestyle title at the Swim England National Winter Championships, winning by more than three-and-a-half seconds in front of his home crowd.

The City of Sheffield swimmer was a clear favourite heading into the final, having won his heat in similarly dominant fashion.

Lelliott was quick off the blocks and took charge from the outset, leading at every turn as the gap widened to the rest of the field.

The 24-year-old was rewarded for his controlled swim, clocking 3:42.68 for the fourth fastest time of his career.

Lelliott has now medalled in this event for five consecutive years, also winning gold in 2015 and 2017.

Lelliott said: “It was ok. I got to 250m and the wheels just started to slightly come and I think it’s a reflection of where I am in training.

“We’ve rested down and I am shaved, but it’s not a full taper, we’ve only done little bits.

“I don’t quite have that back end to go to yet so it’s a nice place to be, but I do expect a bit more of myself.

“I’m confident I can find the extra push. It’s only December and I’ve had a really good period up until now.

“If I’m honest, I’m doing backstroke, freestyle and butterfly this week and the only one that seems to be struggling to click is the freestyle.

“I’m hoping that the fly and the back are going to be really good here as well and I know there’s plenty of time to come on the free anyway.

“I’ve got target times for the other races, but I keep them to myself, it’s just the way I’ve always done things and I really just want to get in the race and see how I do. I just want to be competitive.

“I’m looking at what’s going on at Euros and stuff and keeping an eye on things. It’d be nice to see if I could be a little bit competitive there.”

Hector Pardoe smashed his personal best by almost five seconds to win the Men’s 18 Years and Under 400m Freestyle final.

The Ellesmere College swimmer only had a slender lead with 50 metres to go, but he produced a rapid finish to leave his rivals behind.

That time would have been enough for a seventh place finish in the open final.

Barber and bronze medallist Davide Arioli, of Millfield, also lowered their PBs to round out the podium. 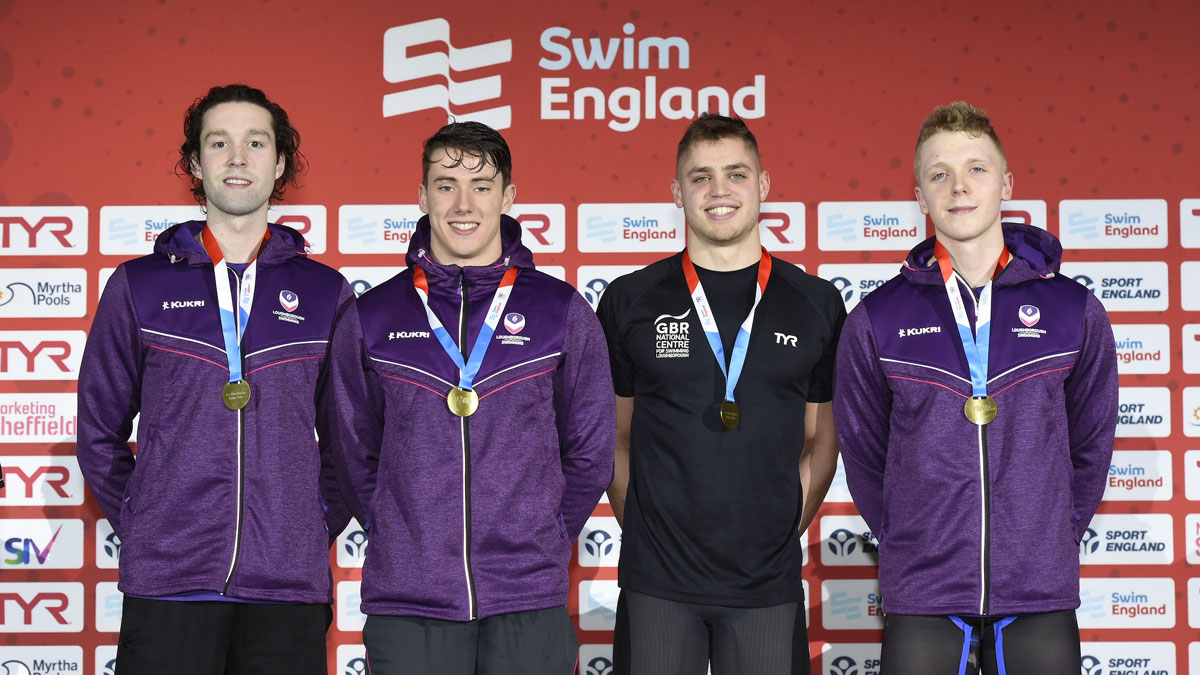 The team was markedly different to the one which secured the 2018 title by almost two seconds, but they won the 2019 final by an even greater margin.

All four of Loughborough University A’s swimmers – Daniel Cross, David Murphy, Alexander Bowen and Samuel Irvine – swam the fastest times on their respective legs, ensuring they wrapped up the gold medal by more than 2.5 seconds.

After standing atop the podium with his teammates, Irvine said: “It’s brilliant. I know it’s only day one but it’s got us off to a really good start.

“All the lights and the crowd are really good so it was a really good atmosphere and to get the gold made it even better.

“It’s a really good, cohesive team at the moment and we love coming to events like this and really trying to show a bit of presence and trying to get as many people on the podium as possible.

“For the relays, we want all golds, that’s what we’re going for – we want the clean sweep.”

City of Manchester edged out East Leeds A to win the silver medal in a thrilling finish.