Adam Peaty shattered his own world record and became the first person to break the 57-second barrier as he cruised into the Men’s 100m Breaststroke final at the FINA World Championships.

Peaty clocked an incredible 56.88 in the second semi-final in Gwangju, South Korea – breaking his own world record by 0.22 seconds.

He was comfortably inside world record pace at the halfway stage and as he sped down the last 50m, it was just a case of how much he would shave off his existing record of 57.10.

And when the time flashed up around the Nambu International Aquatics Centre, the packed crowd went wild although there were no exuberant celebrations from Peaty.

World Record – Adam Peaty lowered his own WR in the Men’s 100m Breaststroke Semi Final to 56.88! All the action live on 💻 https://t.co/bEozhdW5qV#FINAGwangju2019#Swimming#FINApic.twitter.com/iFdXAweCwb

He simply smiled and shook the hands of his fellow semi-finalists knowing he still has the gold medal to win in the final on Monday 22 July.

To emphasise Peaty’s complete dominance of the 100m Breaststroke, none of the other swimmers who qualified for the final broke the 58 second barrier.

Peaty’s goal since the Rio Olympics in 2016 has been Project 56 and he’s now achieved that in some style.

He said: “There’s no real word, except for incredible.

“Obviously, I’ve been chasing that for years now. As soon as I touched that wall in Rio, I was like, ‘I could go faster’. It’s a very special journey that we’ve had and hopefully we’ll go a lot faster tomorrow.

“I said to all these guys down there, it’s still a semi-final. It would be a bit embarrassing to go world record and then not come away with a world title.

“I don’t think like that. What the process in my head is that tomorrow anyone can still beat me, I can beat anyone.

“Going into that race tomorrow as the world record holder, I want to achieve the best possible version of myself. I’m just going to enjoy it. It was a great race.”

Britain’s James Wilby also reached the final as he finished in a time of 58.83 to qualify third fastest.

He said: “I just focus on my own stuff and my own races, but credit where it’s due, that was a very, very impressive swim!

“It’s always really satisfying when we have a GB one-two and we’ve had that at the last two major internationals – we get a real buzz from that.

“For myself though, I’m just moving through each round and the 100m and 200m are both equal focuses for me.

“I’ve started strong now I’ve got to continue it.” 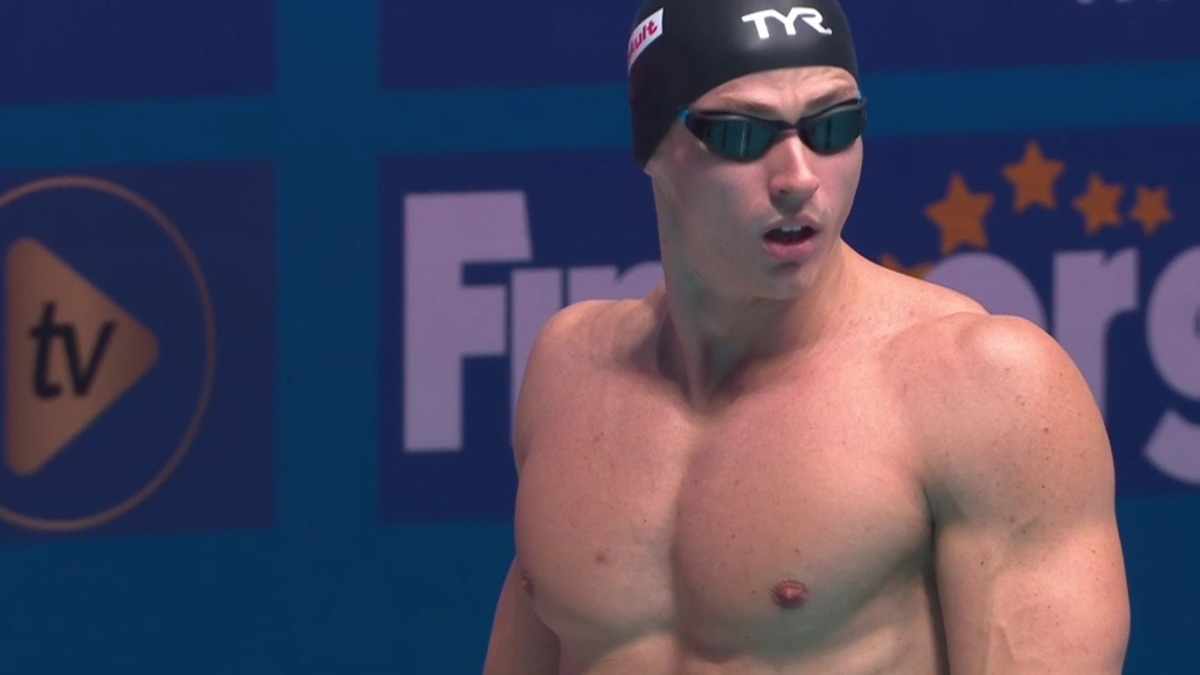 The Plymouth Leander swimmer bettered his heat time by 0.21 seconds as he clocked 23.14 in his semi-final to finish fifth.

Ukraine’s Andrii Govorov won the first semi-final in 22.80, while America’s Caeleb Dressel set a new championship record of 22.57 as he victorious the second race.

Proud said: “It was all about getting to the final, which hasn’t come naturally to me today, with neither of the races feeling springy or the way they’ve felt in the past.

“But I’ve got through and I’ve got 24 hours to put my legs up, recover, focus and try and put a good race together tomorrow.

“I feel confident that if I get my race right then I can get a big chunk out of that time and who knows – in a 50m fly final it really is just about getting your hand on the wall.”

She was eighth fastest in a time of 2:10.49, only 0.23 seconds ahead of America’s Ella Eastin and Switzerland’s Maria Ugolkova, who finished joint ninth and missed out on a final spot in 2:10.72.

O’Connor was 3.32 seconds adrift of the fastest qualifier for the final, Hungary’s Katinka Hosszu who touched home in 2:07.17

There was disappointment for the Men’s 4x100m Freestyle relay team as they finished fifth in the final.

After booking Great Britain an Olympic spot with their semi-final swim, which saw them qualify second fastest, the team of Proud, James Guy, Duncan Scott and Scott McLay would have been in high spirits.

But they couldn’t match their earlier performance in the final and finished outside the medals in a time of 3:11.87.