Jessica-Jane Applegate and Louise Fiddes claimed World Para Swimming World Series gold and silver in the women’s multi-class (MC) 200m Freestyle, with a third of a second between them on day two of the British Para-Swimming International Meet in Glasgow.

The City of Norwich swimmer took the World Series title and national honours with a time of 2:07.35 and a total score of 881 points after a close battle to the finish between her and fellow Brit, Louise Fiddes (2:07.68), who finished just seven points behind.

However, both swimmers were under the consideration time as they hope to be selected for the British team at September’s World Championships in London.

Applegate said: “I’m really happy with that, we actually went back and researched my times at Europeans and that’s even faster than what I swam then, so it’s really good to be getting back on track.”

As well as taking the gold and silver medals, the women’s MC 200m Freestyle finals saw yet another British record broken as Ellie Challis beat the previous record (4:25.48) for her S3 category with a time of 4:24.97.

The youngster has now broken three records so far this week after smashing the national 150m Individual Medley record by more than 20 seconds on the opening night, setting a new European and British record in the women’s S3 50m Butterfly heats and now adding the S3 200m Freestyle to that list.

The 24-year-old was inside the qualification standard for the World Championships with a time of 5:19.27, just half a second outside of her own British record, earning her an impressive total of 957 points.

“It’s swimming, I just love it and I’m so excited to hopefully get picked for the World Championships and it’s in London which is the pool I train in all the time, so I’m just over the moon.”

The Camden Swiss Cottage swimmer competed in her first World Championships back in 2006 at just 12-years-old.

City of Manchester’s Mikey Jones and Lewis White both finished on the podium in the men’s MC 400m Freestyle final.

Jones is the current Paralympic champion after winning gold in Rio and he didn’t settle for anything less again as he earned the World Series title, clocking a time of 4:50.56 and finishing with 886 points.

He said: “I’m very very happy with this morning. Tonight I just made a few mistakes in the final, I went out a little bit too fast but it’s a learning curve and we’ll move forward with that.”

Bas Takken of the Netherlands was the only man preventing a clean sweep for Britain as he took silver, with Lewis White behind him in the bronze medal position and Oliver Hynd finishing fourth. 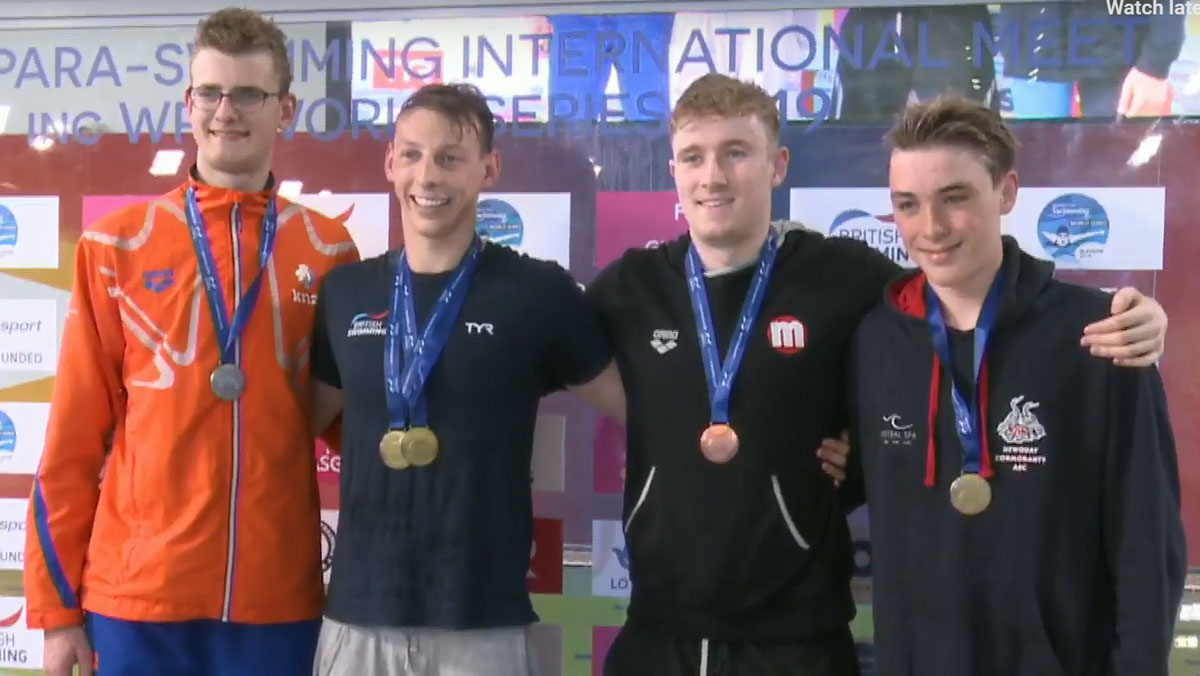 Ellie Robinson took the first gold of the second night in Glasgow and finished under the World Championships consideration time.

The Northampton swimmer won the women’s MC 50m Butterfly World Series title with a time of 36.20 and a total of 920 points.

Robinson said: “I’m really happy to swim the qualifying time for Worlds. It’s quite reassuring to know that I’m ticking along and that I’m still where I need to be.”

Jordan Catchpole took the final gold medal to round off a successful night for Britain as he cruised home in the men’s MC 200m final.

The City of Norwich swimmer was just outside the consideration time, reaching the wall in 1:58.12 and racking up a huge total of 940 points.

Two Japanese swimmers, Takayuki Suzuki and Keichi Nakajima, finished in second and third, with Britain’s Dylan Broom not far behind in fourth.