The City of Manchester made it a clean sweep of Girls National Age Group titles after winning the U15’s Girls championships at Ponds Forge.

It adds to the clubs success at both U17 and U19 level at the National Age Group Championships back in May.

Manchester’s incredible quality was on show throughout the tournament and they defeated an impressive Beckenham side in the final.

After a close battle in the early stages, Manchester stormed into a 7-1 lead before the interval and never looked back.

Goals from Amelia Crompton and Abigail Colson as well as five from Lucy Blenkinship gave them the advantage in the first half as they settled into their stride and pulled into a comfortable lead.

Beckenham fought on with everything they had in the second period to try and get back into the match but Manchester were just too strong on the day as they came away with a 13-4 victory.

A further six goals in the second half saw Manchester put the game beyond doubt despite three Beckenham replies from Sareena Gallagher, Eva Veraas Brown and Anjelea Gallagher.

Lily Evans also got on the scoresheet for Beckenham with their only goal in the opening period.

Blenkinship took her total for the match to eight with another three of those in the second period with Crompton adding three more to her tally too as she grabbed four in the gold medal affair. 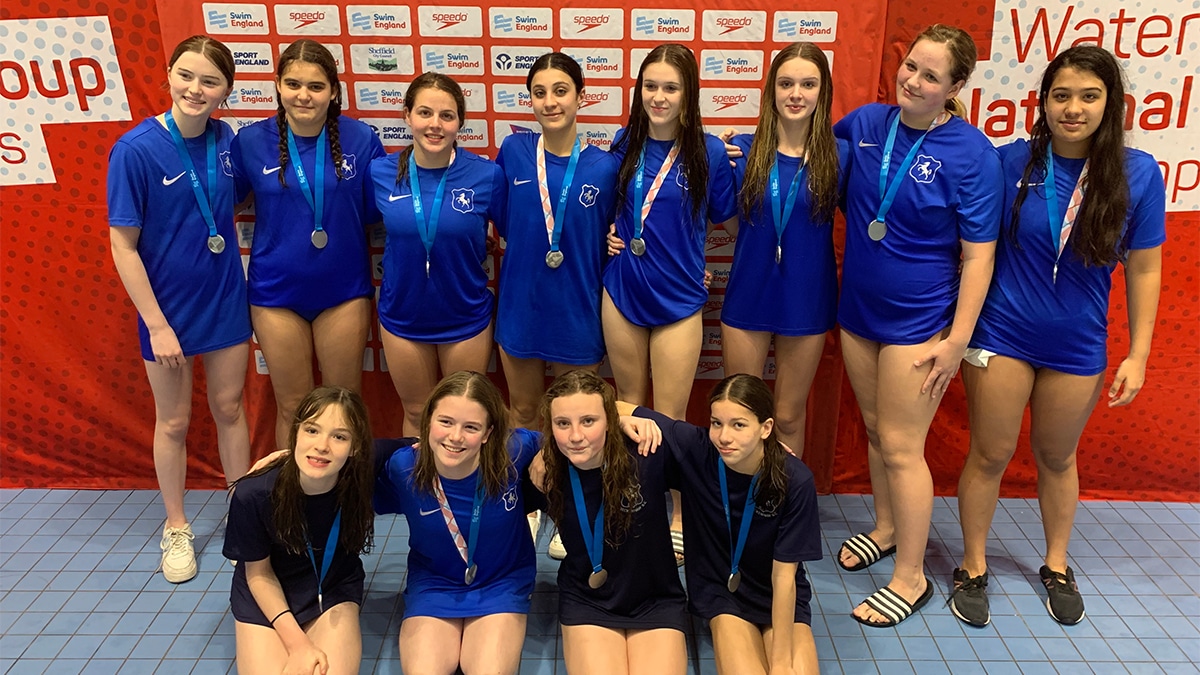 In the bronze medal match, 2021 champions Cheltenham came away with the final spot on the podium after an 8-6 victory over the City of Sheffield.

A hat-trick from each of Ella Webster and India Knights-Hume as well as a double from Jessica Day saw them run away with the win in a close fought game.

The home pool side gave it their all with Alice Berrill particularly impressing as she netted four throughout the contest.

It wasn’t enough for Sheffield however as they narrowly missed out on a medal place. 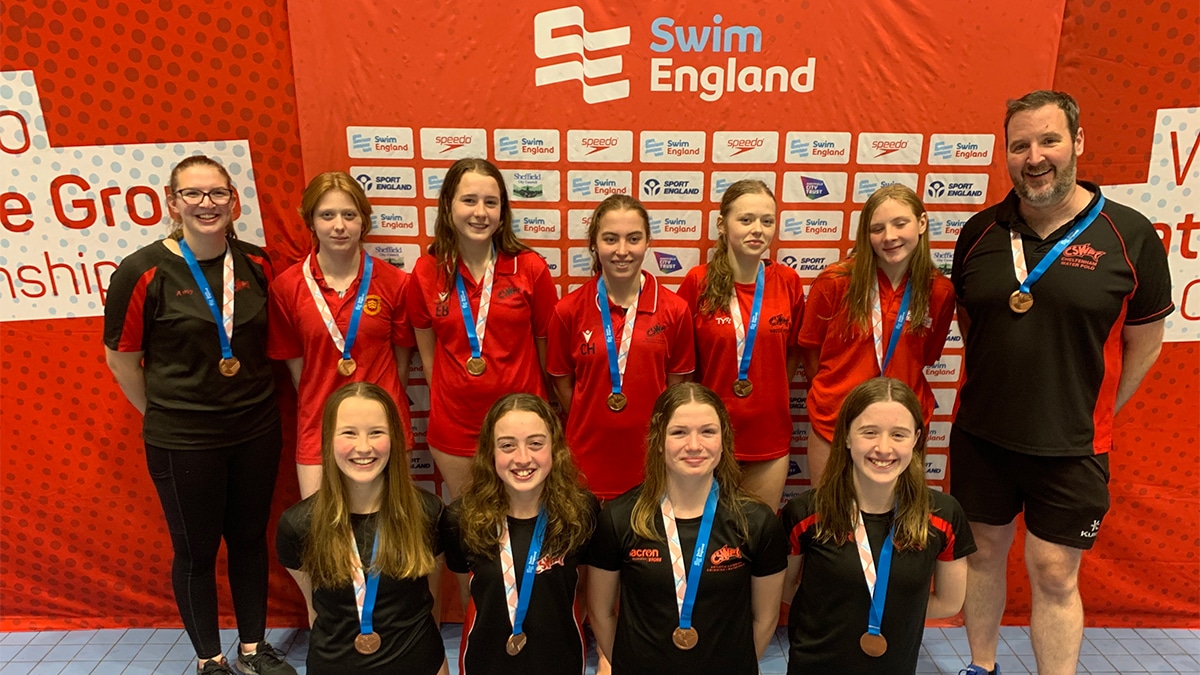 Manchester’s Blenkinship’s goal scoring exploits saw her take home both the top scorer and the most valuable player awards.

She finished on 32 goals throughout the competition including those incredible eight goals in the final.

City of Liverpool’s Jessica Freeman came away with the top goalkeeper prize after her efforts helped her side to finish in sixth place.

They were awarded their accolades by former Swim England President Ian Mackenzie. 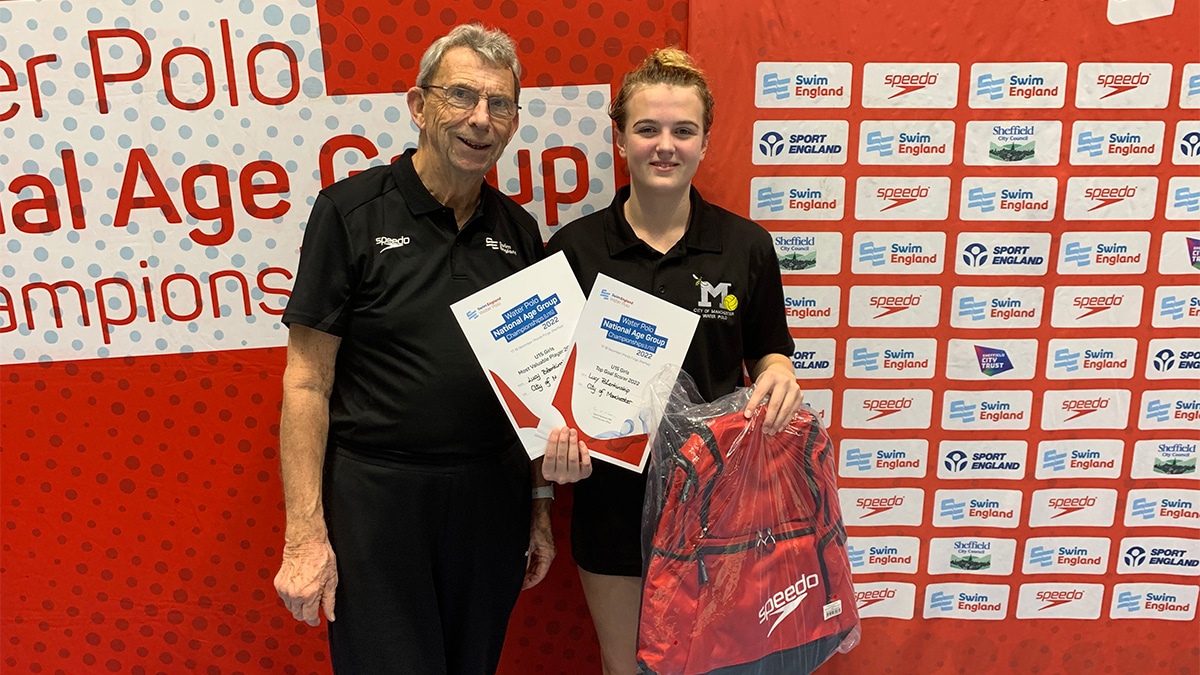 City of Manchester and Beckenham booked their places in the gold medal match after both sides secured a 100% record in their group.

In Group A, Beckenham ran out with a narrow victory over the City of Liverpool in their opening game with a 6-4 win.

They followed that up with an 8-3 win over the City of Birmingham and an impressive 6-1 victory against West London Penguin.

That left them in a top of the table decider with the City of Sheffield to round off the group where they came on top in an entertaining contest that ended 10-6 to the London based side.

Sheffield finished second in the group after defeating the other three sides in the group. They opened up their campaign with an 8-4 win over the City of Liverpool before beating Penguin 7-4 and the City of Birmingham 11-6.

City of Liverpool finished in third place with two victories from four with Penguin in fourth and City of Birmingham finishing fifth.

City of Manchester were dominant in Group B as they won all five of their matches in convincing fashion.

They got off to the best possible start with a 19-0 win against Rotherham which they followed up with the 13-1 defeat of Watford.

Devonport (13-6), Cheltenham (11-5) and Worthing (9-4) provided sterner tests for Manchester but in the end they were too strong as they secured their place in the gold medal match.

Defending champions Cheltenham ran out best of the rest with their defeat to Manchester and a draw with Devonport the only blips on their record during the group phase. They finished on seven points as they set up their battle for bronze with the City of Sheffield.

Devonport finished third with two wins over Watford (7-4) and Rotherham (16-0) as well as that 4-4 draw with Cheltenham allowing them to finish ahead of both Watford and Worthing by just a point.

Watford were fourth because of their head to head record with Worthing after their 4-3 victory against the West Sussex side with Rotherham ending up sixth in the group and therefore 11th overall.

The 9th/10th place match begun the playoff phase as City of Birmingham and Worthing battled it out for the position.

It was Worthing who came away with a convincing 12-0 after a tremendous display.

Watford came out on top in their 7th/8th place match against West London Penguin.

The London based side triumphed 8-4 over Penguin who became the U15 Boys champions yesterday.

And finally the 5th/6th place playoff saw Devonport run out 5-3 winners against the City of Liverpool.

In a close game both sides battled on bravely until the final whistle but it was Devonport who had just enough in the tank to secure fifth place.

You can see the full scoreboard with all of the results and standings here. 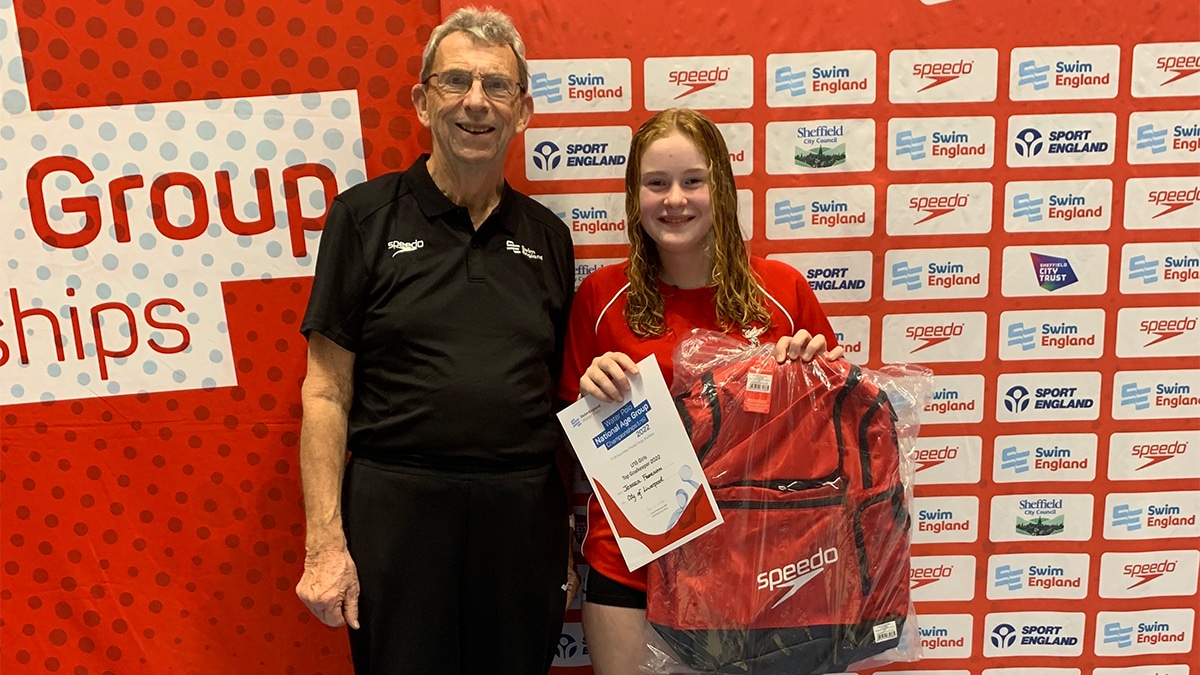