Following the Commonwealth Games in Glasgow 2014 where I witnessed some of my friends compete for their respective home nations (sounds a little cliche), I was given the challenge by a colleague (Sharon Lock, the ASA’s newly appointed Masters Officer) to make a return to the sport and compete at the British Gas ASA National Masters and Senior Age Group Championships 2014, 24 – 26 October 2014.

Still involved in the sport

Although since giving up competitive swimming I have still been heavily involved in the sport; volunteering at national events and teaching in my spare time, as well as working for the ASA’s Insight Team, it had been a while since I had been in the water to have a paddle for myself.

This was going to be a daunting experience having not been swimming at all since I moved away from home, seven years ago.

The first hurdle I had to overcome was getting my first training swim out of the way, the first time after a long absence.

I opted to head to the pool after work on a Friday evening as I thought this would be a quiet time, hoping no-one would be around to witness me belly flop back into the pool.

With all the focus being around getting myself back into the water, I hadn’t realised it was long course (50m – note to self, always read the pool timetable properly)!

Despite it being 50m, the element that made the re-entry so difficult in the past was not there. I now had motivation and after a few lengths it wasn’t as challenging as I first feared.

But I definitely needed to build my aerobic fitness and to also regain a ‘feel’ for the water again (this may seem like an odd concept for all those who are non swimmers). 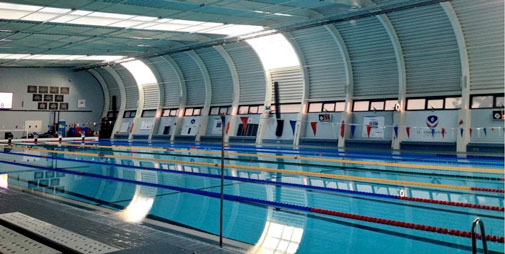 It was apparent that if I was going to take this seriously I needed to get into a training routine. I had heard of the ‘Loughborough Lunchtime Crew’ and was persuaded to give it a go (click here for an example training session).

My aim for the first session was not to get lapped too many times by my new training partners. I managed to surprise myself and made the majority of the intervals between sets. This was a positive step – I hadn’t lost the ability to swim!

I definitely needed some advice on competitive swimming as well as some stroke technique guidance, so who better to ask than Olympian, Commonwealth Champion and friend, James Goddard?

It was great to get his advice on my stroke technique and he also gave me a few training techniques to focus on.

It wasn’t long before ‘eau de chlorine’ was present again and my colleagues became accustomed to seeing me with wet hair and smudged make up.