The Ealing swimmer topped off a successful few days at the British Para-Swimming International Meet in Glasgow by setting yet another world record.

Tai’s time of 29.43 was a personal best and a new world record in the S8 category for the women’s MC 50m Freestyle. Her time racked up an impressive total score of 1030 points.

Second and third places were fought out between Carlotta Gilli of Italy and Aurelie Rivard of Canada, with the Italian finishing ahead by 12 points with her total of 926 points, to take the silver medal.

Tai was extremely close to breaking her second world record of the night in the women’s MC 100m Butterfly, finishing just 0.05 outside of her close friend Stephanie Slater’s current record (1:08.20) with a time of 1:08.25.

The 20-year-old said: “Steph’s an absolute legend and I love her to bits. I was like if I go 0.01 outside it [the world record] that’s ideal.

“But then I also screwed up my turn really badly, so I feel like that would’ve been under the world record if I hadn’t, but I’m kind of happy it still stands because I don’t want to take it from her.”

It was two more World Series gold’s for Tai to add to her collection, but her new world record made it three records within two days.

After breaking the women’s 100m Backstroke world record during day three, she then broke the 50m Freestyle record in the heats with a time of 29.66 and again in the final (29.43). 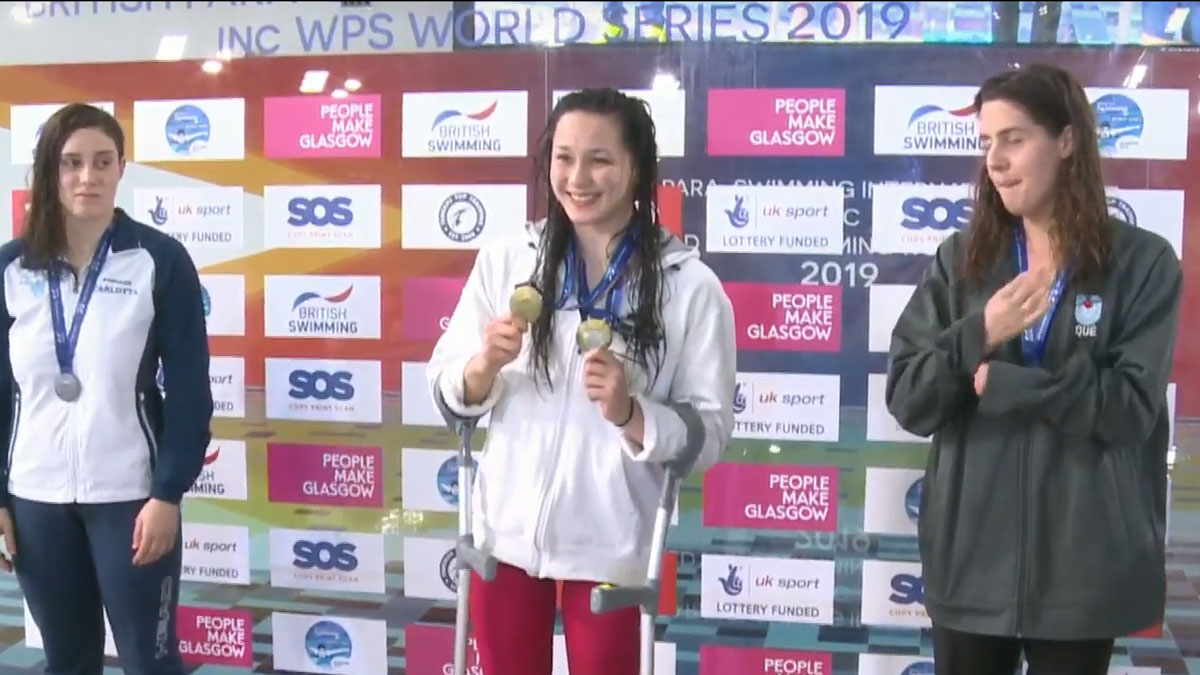 Gold, silver and bronze for Britain

With Alice Tai clocking a time of 1:08.25 in the 100m Butterfly, her total points tally of 997, placed her ahead of fellow British swimers Jessica-Jane Applegate and Toni Shaw.

Applegate is the current world record holder for the women’s S14 category 100m Butterfly, but couldn’t better that this time around as she took the silver medal in a time of 1:05.12, which scored her 955 points.

Scottish swimmer Toni Shaw swam a time of 1:08.52 to finish in the bronze medal position and earn 924 points.

Young Ellie Challis was also a record breaker in the final day of the British Para-Swimming International Meet, smashing the current S3 British record in the women’s 50m Backstroke (1:04.36) with a time of 1:01.53.

The Colchester Phoenix swimmer was beaten to the gold medal by Italy’s Monica Boggioni, but Challis took silver as well as earning medals for being the top British and top junior British performer.

Dunn gets the job done

Reece Dunn of Plymouth Leander, who set a new S14 world record in the men’s multi-class (MC) 100m Freestyle on the opening day in Glasgow, took another gold medal in the men’s MC 100m Butterfly with a time of 55.87 and a total score of 991 points.

When asked what it would mean to be selected for the World Championships in London this September, Dunn said: “I’m feeling really happy with how I swam this week and finished it off with a nice race.

“It would mean the world to me, I’ve worked my whole life for this, I’ve been competitive swimming since I was nine.”