Great Britain grabbed a sensational gold medal in the final session of the FINA World Championships after an astonishing relay display.

The Men’s 4x100m Medley Relay team of Luke Greenbank, Adam Peaty, James Guy and Duncan Scott set a new European record time of 3:28.10 as they touched home first ahead of America and Russia.

It was an incredible performance from the whole team but especially Scott, who was more than a second behind when he dived into the pool for the freestyle leg.

With only 50m remaining, Scott was trailing in third place but the 200m Freestyle bronze medallist sped past Russia’s Vladimir Morozov and America’s Nathan Adrian to touch home first.

World championships 200m Backstroke bronze medallist Greenbank led the team off and he was fifth when Peaty took over.

The three times double World Champion in the 50m and 100m Breaststroke swam a 57.20 leg to push Britain into the lead and Guy then held his own against America’s three-time 2019 World Champion Caeleb Dressel.

However, it looked like Britain would have to settle for the bronze but Scott had other ideas and his blistering 100m Freestyle leg of 46.14 seconds secured a remarkable gold medal.

Scott said: “No, I can’t say I knew I had that split in me. I’m sort of speechless to be able to put that race together.

“The boys put me in an incredible position. I just had to try and execute the race plan.

“We’re quite a young team. We’ve got quite a few years more together. It’s been a great swim for us, and we’re starting to look forward to next year.” 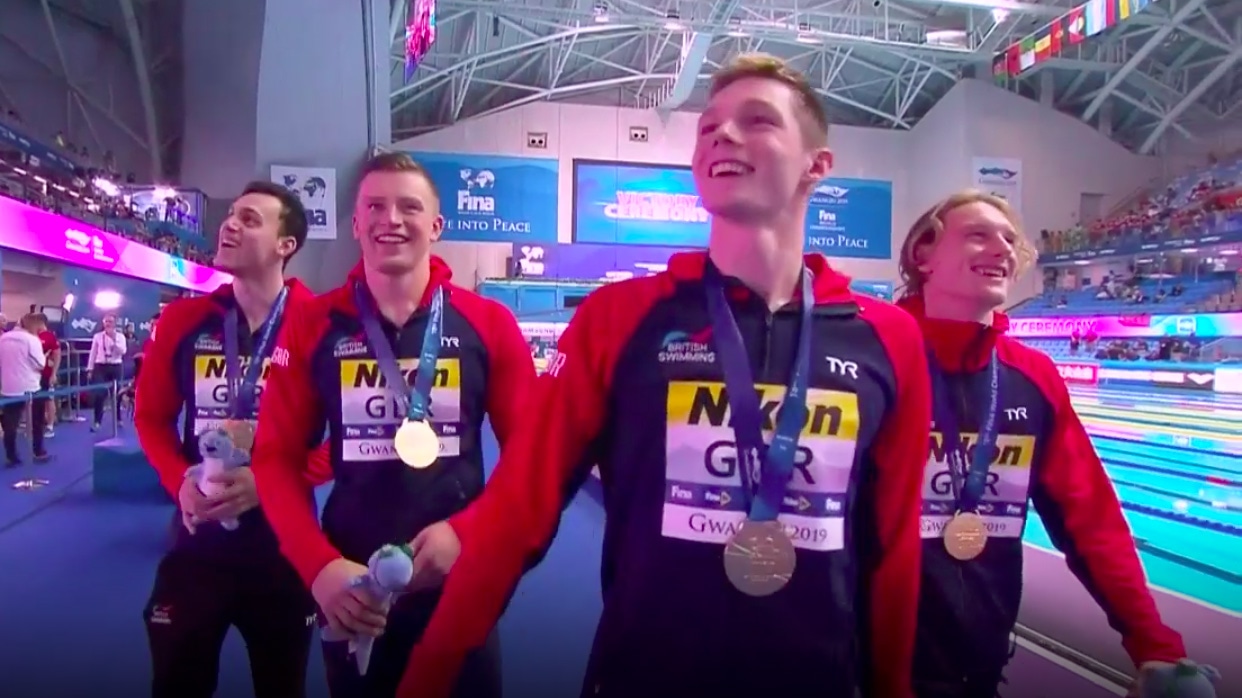 “I saw Jimmy hold his ground. We knew Dressel was going to be the top guy. But I knew if it was close, we would have a chance.

“As soon as Duncan dived in, I thought ‘we’re going to get bronze’. With 25m to go I was jumping up and down like never before and the last 10 metres he just got his head down and took him out.

“For me, that’s better than Olympic gold and anything else, as when you do it as a team, and the fact the Americans have never been beaten in this event I don’t think, it’s just amazing.”

“We took it out fairly aggressive. At the Olympics I think it will be a different race.”

Greenbank said: “I just wanted to try and put the boys in the best possible position and I knew if I could get there within Peaty range he’d be able to pull it back and he did an amazing job.”

And Guy added: “I knew Adam would do a massive job for us and Luke did an amazing job as well, so there was pressure as we were all in a line together and it was a very close race.

“I know my back end, when I’m on form, is really good and if I could get there close to Dressel we’d have a good chance of medalling.”

It was the first time Britain have topped the podium in the men’s 4x100m Medley Relay.

They shattered the world record to take the gold medal in a time of 3:50.40 – more than three seconds ahead of the second-placed Australians.

The Ealing and University of Arkansas swimmer had set two new personal bests to reach the final – bettering her heat time in the semi-final as she qualified seventh fastest.

And in a final full of quality, Hopkin again showed her potential as she finished in 24.40 – the second quickest time of her career.

Less than half a second separated the whole field as America’s Simone Manuel took the gold in 24.05.

Sweden’s Sarah Sjoestroem was second in 24.07, while the bronze was won by Australia’s Cate Campbell in 24.11.

Hopkin said: “It was only very slightly slower than in the semi-final so I’m very happy to have been able to produce a consistent swim.

“Yesterday my start went so well, but I didn’t quite get the finish, whereas today I was just slightly off on the start, but these are tiny details I can work on next year.

“My goals were to make semi-finals – in the 100m and the 50m I was ranked 19th and 20thcoming in, so the goal was to try and sneak into semi-finals, so to come seventh in the world in the 50 and just miss out on the final in the 100 is definitely more than I expected – I’m really happy.”

Max Litchfield put up a strong fight for a medal in the Men’s 400m Individual Medley but eventually finished seventh.

He was lying fourth at the halfway stage of the race but couldn’t keep up with the pace shown by Japan’s Daiya Seto, who touched him first in 4:08.95.

He said: “Yeah, I attacked it as that was the only way I was going to do anything, but I don’t really know what to say, it’s just disappointing.

“I’ve worked hard this year and I’ve had a great training year and that’s not good enough for me, nowhere near.

“We’ll have to look back at the race and see what we need to change and what we need to work on, but I’ve had a great year and it’s tough to not see the results I should be getting.

“But you make mistakes and you learn, so we’ll come back better.”