The City of Oxford swimmer was seventh after 150m and 1.42 seconds behind the leader at Sheffield’s Ponds Forge International Pool.

The bronze medal was won by Hatfield’s Max Jelfs who recorded a time of 1:55.52.

Derwentside’s Lewis Maxwell clawed back a 0.28 seconds deficit with 50m to go to win the 15 Years event.

Cockermouth’s Pierce Greening claimed the bronze in 1:59.19, with Seals RSA’s Jacob Armon winning a commemorative medal after finishing third in 1:57.22.

City of Birmingham’s Alexander Hindle was landed the 16 Years title with a winning time of 1:56.65.

That was 0.21 seconds ahead of Royal Wolverhampton School’s Thomas Watkin, who won the silver in 1:56.86.

The top two in the 18 Years event both won commemorative medals.

Northampton’s Liam Snook claimed the silver in 1:54.18, while Newcastle’s Thomas Howley won the bronze in 1:54.33.

Eliza Plinkstone took the gold medal in the 12-13 Years age group as she touched him 0.08 seconds ahead of Eva Okaro.

The Stockport Metro swimmer finished in 1:04.87 to top the podium, with Okaro, of Sevenoaks, having to settle for the silver in 1:04.95.

Royal Wolverhampton School’s Chloe Harris won the bronze medal in a time of 1:05.10.

In the 14 Years event, Meadow Dransfield led from start to finish as she claimed the gold.

The City of Sunderland swimmer was 0.19 seconds clear of silver medallist, Delphine Little (City of Oxford) who finished in 1:05.02.

Portsmouth’s Faye Francis was a further 0.43 seconds further back but claimed the bronze in 1:05.45.

Commemorative gold medals were awarded in both the 16 Years and 17 Years+ event.

She was 1.38 seconds ahead of City of Liverpool’s Jessica McDonough, who won the Swim England National Summer Meet gold in a time of 1:04.12.

City of Oxford’s Emily Ford picked up the silver medal in 1:04.30, with Grantham’s Abigail Farkas winning the bronze in 1:04.92.

Two commemorative medals were awarded in the 17 Years and over race.

Denmark’s Katrine Bukh Villesen broke the 60-second barrier to win the event in 59.82.

Holly Williams (North Lincs SS) claimed the silver medal in a time of 1:02.86, with Team Bath’s Rhiannon Bowen the bronze medallist in 1:03.86.

A second commemorative medal was presented to Denmark’s Cecilie Wiuff who finished the race third in 1:02.86. 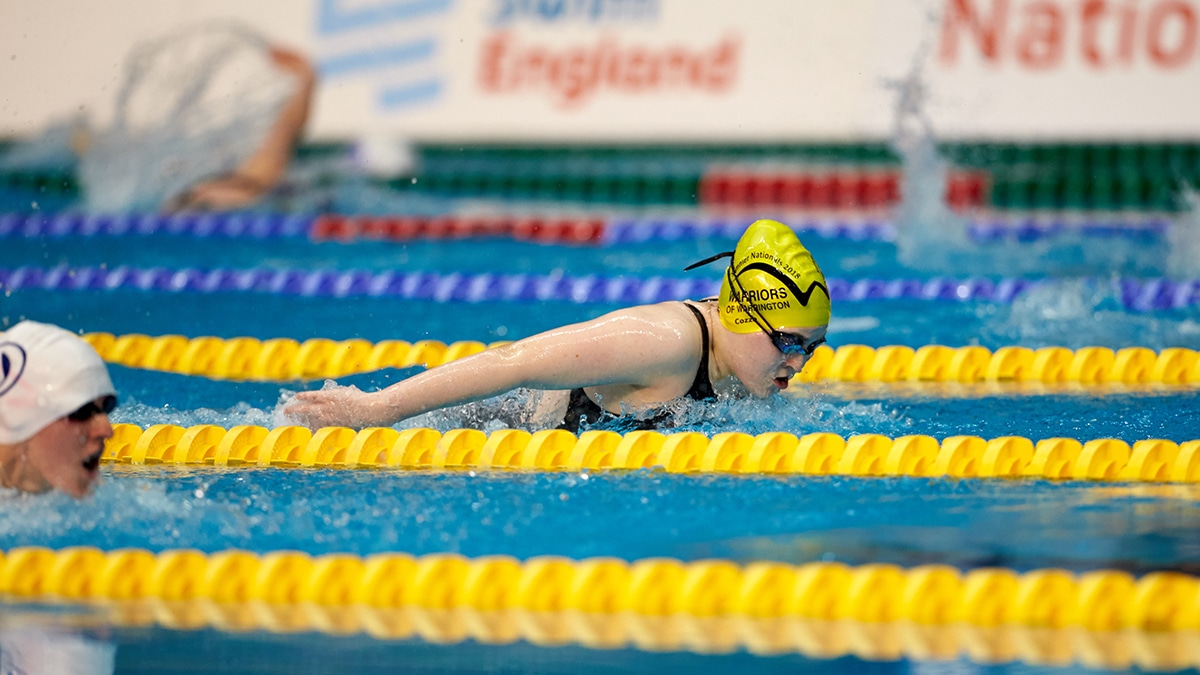 Jay McCabe won her third medal of the meet – and her second silver – in the Women’s MC 200m Individual Medley.

The bronze was won by Mount Kelly’s Benjamin Grainger, his second medal of the event after picking up silver in the Men’s MC 100m Breaststroke.