Tully Kearney and Maisie Summers-Newton shone on a fantastic second day for GB swimmers at the Tokyo 2020 Paralympic Games.

Both Kearney and Summers-Newton set new world record times as they took gold in their respective events.

After a silver on the opening day of Paralympic action, Kearney went one better on day two to finish on top of the podium in the Women’s S4 100m Freestyle final.

The Manchester NPC swimmer said she was ‘absolutely determined’ after being beaten to gold in the 200m event by the finest of margins – and she managed a time of 1:14.39.

In the same event, Suzanna Hext took her second fourth spot of the Games, finishing 0.06 seconds behind third place in a time of 1:22.49

It wasn’t a long wait for a second swimming gold and Maisie Summers-Newton was ‘lost for words’ after her incredible performance in the Women’s SM6 200m Individual Medley.

The 19-year-old clocked a time of 2:56.68 to reclaim the world record, after it was lowered by Ukraine’s Yelyzaveta Mereshko in the heats, and take home the gold medal.

Ellie Simmonds, who won the event at the Rio 2016 Games, finished in fifth in a time of 3:04.37. She was followed by GB teammate Grace Harvey whose time of 3:05.58 earned her sixth place.

‘Paralympic gold is what I dreamt of’

Following her win, Summers-Newton said: “Just absolutely speechless. Paralympic gold is what I dreamt of ever since watching Ellie [Simmonds] in London so just to do it now, it definitely hasn’t sunk in yet but just incredible – I’m so happy.

“It definitely was in the back of my mind, Paralympic gold was definitely something I wanted to add to my world and European gold.

“My heat swim was pretty solid but then the others girls this morning did pretty well as well so I think that definitely spurred me on. But tonight I just wanted to get out there, race for myself and just enjoy it and it definitely worked.

“Ellie is such a Paralympic icon everywhere I think and I’ve definitely got used to racing alongside her. I think at the start I was very star struck by her but now honestly, she’s the loveliest person and just to race against her is just incredible so, it’s just all amazing!

“I’ll obviously celebrate with my coach because this has been something we’ve been wanting to do together since I’ve started my career with her so celebrate, get back, obviously call all my family and friends because I think they’ll all be quite excited at home.”

Discussing how she hopes to inspire others, she added: “Hopefully if they’re watching my race tonight, I think it just shows anyone can do it if you put your heart to it and work really really hard and that’s definitely what I’ve tried to do throughout my whole career so far.

“If there’s anyone out there wanting to get into para sport just do it because honestly it’s incredible. Before swimming I was quite shy and swimming’s definitely given me that confidence and just the friends you make through it as well and all sports I think – not just swimming – but definitely, empowerment.” 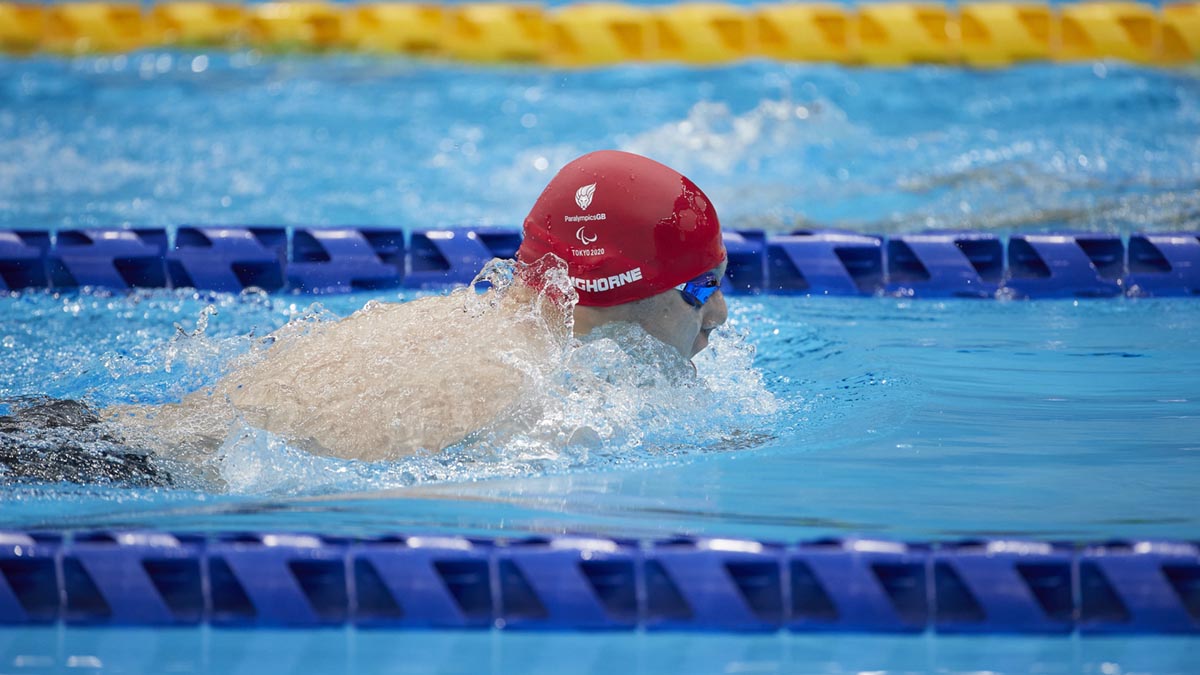 In the Men’s S4 100m Freestyle final, Lyndon Longhorne broke his British record for the second time after a record-breaking heats swim and then another in the final.

He improved by 0.97 from the heats to finish in a time of 1:33.30 and take seventh place – making it an overall improvement of more than five seconds from his record before the Paralympics.

After a late change due to Suzanna Hext being withdrawn from the relay team on medical grounds, Ellie Challis was added to the GB quartet for the Mixed 20 Points 4x50m Freestyle Relay final.

This is the first Paralympic Games for all members of the GB relay team of Kearney, Longhorne, Challis and Northampton’s William Perry.

All swimmers looked to inspire the next generation with their determined performance. Their time of 2:48.34 saw them take eighth place.

“We’ve all gone out there, decided that we were going to have a bit of fun with it and we just wanted to show the public back at home that it doesn’t matter what disability you’ve got, you can participate in sport, and that was the main thing really.

“We just wanted to thank everyone that helped, including the National Lottery that pay for all our funding, British Para-Swimming, ParalympicsGB and everyone that’s helped us get to this stage.

“Being able to compete in a relay just gives you that thrill that you don’t get in an individual sport like swimming so we’ve really thoroughly enjoyed that and we’re just really grateful for the experience.”

Anyone can do anything

“And especially people with meningitis and things like that, we want to inspire them to go on and get into sport and show that it’s not just about disability, it’s ability really.”

After her late addition to the relay team, Challis said: “I really didn’t expect this today, it was a last minute change because of circumstances that we couldn’t control so, it was a rush to get here and to be here on time but it was great.

“It’s great to be with your teammates. We just want to promote the lower classes going into Paris, there’s not many of us. I compete by myself in the UK so it’d be lovely in years to come to have other people there with me so hopefully this can help.”

Perry, who swam the anchor leg of the race for GB, said: “From a young age, it’s so easy to feel left out.

“Many a time all of us will have felt in that position and in any sport, not just swimming, athletics or anything, I think we need to really show what we can do.

“Anyone can do anything, you’ve just got to put your mind to it, work hard and it’ll come to you.”