For those intrepid few who battled through the tail end of the storms that were battering the UK, to attend the second Swim England London Masters Development Day, they were in for an absolute treat.

Not only was it a virtually new pool, still in pristine condition, they faced an agenda that was crammed full of top-level coaching and some new and innovative swimming technology.

The coaching was provided by Stephen Baker, the Head Coach of Spencer Swim Team, the current British Masters swimming champions, who started the day off with a thought-provoking presentation about aims and objectives.

Into which, he expertly weaved a lot of information about the “big issues”, the warm-up, technique and drills and the relevance of all sorts of numbers pertinent to swimmers.

All of which were soon put into practice in the 50m, and fortunately for all concerned, indoor, pool.

After which, it was straight back to the studio where there was a general discussion revolving around everything that was practised in the first morning swim session, while everyone re-fuelled themselves with lunch in preparation for the afternoon one. 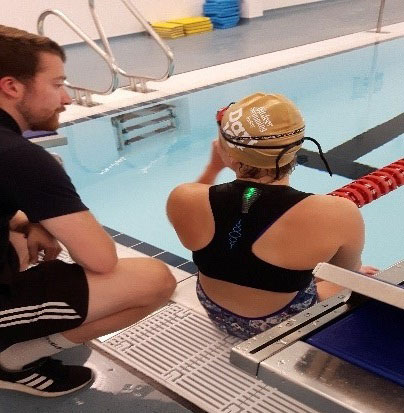 However, before anyone was let loose with the new toys, Incus’ three representatives gave a very thorough and detailed talk about exactly what it was we were about to let ourselves in for.

This evidently struck a chord as there was a very in-depth and lively Q&A session subsequently.

Stephen also took charge of the afternoon session, which was much more focused on specific swimmers’ requests, while a few at a time were split off to have a go with the new technology.

Once the vest was on, the device activated, it was then up to the swimmer to choose which stroke they wanted analysed, before setting off on a 200m swim.

Even though it was only a relatively short swim, it was surprising the amount of data collected and revealed back in the analysis.

Of course, there were the necessary stroke count, distance per stroke numbers, but the velocity gain, body roll, yaw and pitch were new to everyone, and which certainly raised a few eyebrows with one or two.

It was certainly a fascinating insight into one’s technique, and having it given back to you in numbers, just made it all the more relevant, and perhaps even irrefutable, and hopefully, everyone who took part, manged to glean at least one snippet of vital information to assist them in improving, I know I certainly did.

It was a real shame when the time was up, as it had been a very worthwhile, educational and productive development day that had just flashed by, and certainly left one feeling a need for more of the same