Swim England London facilitated a 1 to 1 Safeguarding & Protecting Children workshop for Will Reed who is a coach at Teddington Torpedoes. Wendy Dorgan, Head Coach at the Club has said the below about Will. 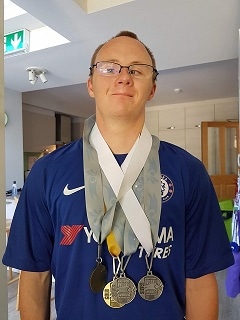 “I first met Will when he was 4 years old and his parents brought him to me for swimming lessons. It was soon clear that Will had talent when it came to swimming. Some years later, having become a national and international swimmer, Will returned to volunteer at Teddington Pool where he had first learned to swim.

Will helps out with coaching at Teddington Torpedoes, a swimming club for adults, young people and children with learning difficulties. His expertise is particularly valuable when it comes to teaching the finer points of breaststroke – his specialist stroke. He is an inspiration to our swimmers, and there was one occasion where I had tried on and off for 10 years (!) to teach a swimmer to dive in from the side, and Will achieved this in one lesson (the swimmer never attempted to dive in again, but he did do one standing dive under Will’s direction). Our swimmers know an expert when they see one, and they always make good progress during his lessons.

It’s not only the swimmers who benefit from Will’s coaching. Will has learned many new skills too. He’s had to learn how to communicate effectively with swimmers (some of whom are non-verbal), break down skills into smaller steps, be patient and try another method if something isn’t working well, work co-operatively with other volunteers, etc. Completing the safeguarding course is another valuable step in Will’s career progression.

Having Will as one of our volunteers is good for the group as a whole. Most of our helpers are teenagers from local mainstream schools and colleges. Our club is all about inclusion and Will is one of several helpers who started out as swimmers in the club, before taking on the role of assisting their peers. Our helpers all work together as a team, whether they have learning difficulties or not. Will performs a similar role at Richmond SC. From a coach’s perspective, it’s great to have Will on my team, advising me about up-to-date training techniques and workouts. And annual disco nights are always good fun – Will is a great dancer! ”

Joy Retter, the presenter for the course said,

“When I was asked to present the Swim England safeguarding workshop for Will, I was honoured to be asked but also very unsure. We had 3 x 1 hour sessions done as a 1 to 1 with a support so not to lose any of the key messages. I was lucky that I received a great brief from the club about Will and that he had a super and helpful support worker which helped enormously. Will has participated really well and enthusiastically.

I think it is great that the Region is able to make reasonable adjustments in order to support those that need it and hope that this format can allow others to reach their potential.