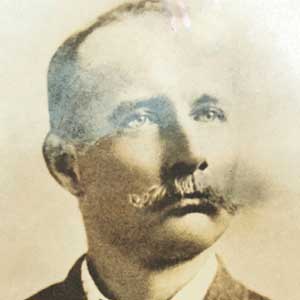 The first man to successfully swim the English Channel, Captain Matthew Webb was born in Shropshire and learned how to swim in open water in the River Severn in Coalbrookdale.

He left his home town at the age of 12 to train on the HMS Conway and joined the merchant navy as an apprentice.

While serving on the Cunard ship line from New York to Liverpool, he dived into the mid-Atlantic in an attempt to save a man who had fallen overboard. The man was never found but Webb’s bravery made him a hero.

He went on to rescue his 12-year-old brother Thomas from drowning in the Severn near Ironbridge.

In 1873, Webb was captain of the Emerald steamship when he read about a man who had attempted to swim the English Channel and failed. The account inspired Webb and he resigned as captain to train for the challenge.

He first tried to cross the channel on 12 August 1875 but poor weather and sea conditions forced him to abandon his attempt. Twelve days later, he set off again and, despite several jellyfish stings and strong currents, he completed the swim, which was calculated at 40 miles, in 21 hours and 40 minutes.

Following his success, Webb wrote his own book, titled ‘The Art of Swimming’ and took part in exhibition swimming matches and stunts.

He drowned in 1883 while attempting to cross the Whirlpool Rapids below Niagara Falls.

A memorial in his home town of Daley, Shropshire, reads: “Nothing great is easy.”

Webb was inducted into the International Swimming Hall of Fame in 1965.