To celebrate International Women’s Day on March 8, here is the full story of Team Bath’s wonder woman Karen Bowen, who was crowned Swim England Volunteer of the Year 2017, as featured in the Jan – Feb edition of the Swimming Times.

When Karen Bowen was diagnosed with a disfiguring facial cancer, she knew it would be life-changing.

She would be unable to work or drive while even simple tasks like reading and housework would present new challenges.

Many people would have been tempted to give up. But not Karen.

When someone at her daughter’s swimming club Aquae Sulis (now Team Bath AS) invited her to take on a volunteering role, she accepted the challenge.

“Somebody must have thought I was at a loose end and maybe they were right!” says Karen, 49.

“They needed volunteers for various roles and they offered me the job of Swim21 co-ordinator. I explained that I knew nothing about swimming but I was quite organised so would give it a go.

“I couldn’t be a coach or a teacher because any role needed to be on my terms. But I could do Swim21 at home when I was well enough. It gave me flexibility.

“This was in October 2013. I was still having radiotherapy. From then on I have been involved with Team Bath AS on the committee doing various things and learning as I go along.”

It was two years before that when Karen first became aware of problems with the left side of her face. But nine months passed before she was given a diagnosis.

“I have a history of sinusitis and problems with my eyes and I think that’s what confused them,” she says. “I got other suggestions such as lupus and bronchiectasis.

“They thought it was a problem with my immune system so I had massive doses of steroids. But it just kept getting worse. My whole health was going down. Nothing was happening.

“They discharged me from hospital looking terrible. My husband Chris wrote to Professor Whittaker at St Thomas’s in London and sent him these photos. He was also sent a tissue sample.” 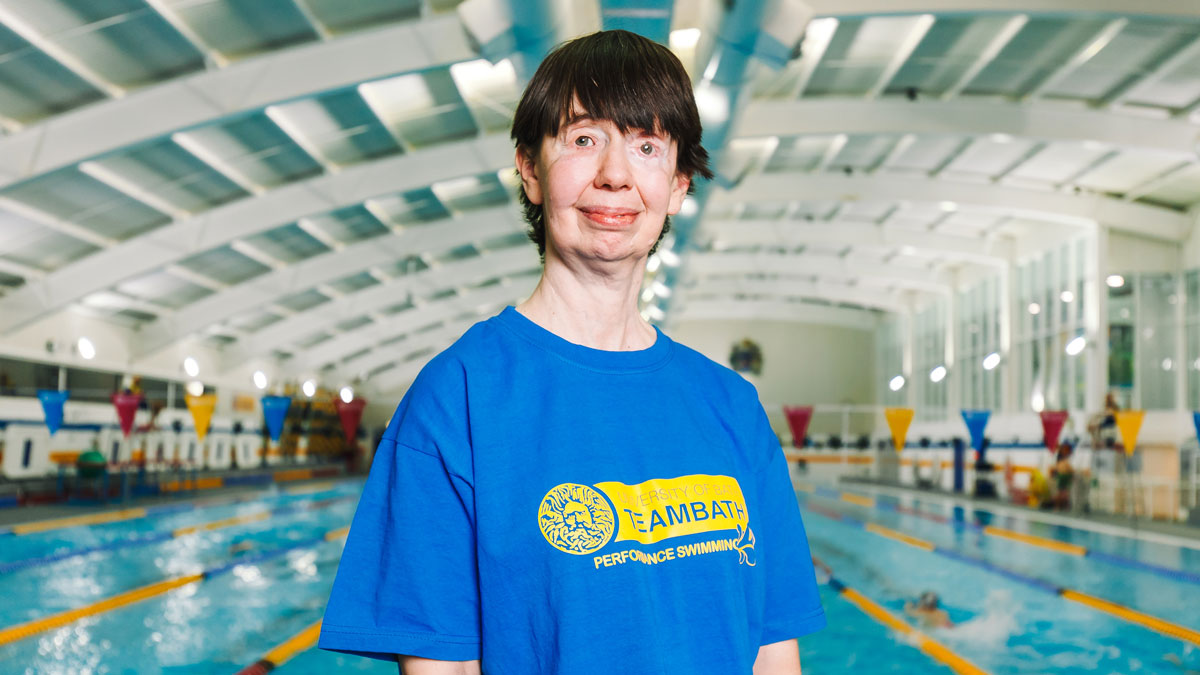 Karen’s symptoms included swelling around her left eye and left cheek. She describes it as a ‘solid mass’ while the ‘skin was decaying’. The diagnosis was primary T-cell lymphoma of the face.

“They call it a peri-orbital, which means round the orbit of the eyes. It spread across my nose, right down my chin, into my scalp.

“My face was twice its normal size on one side. They told me in front of my husband and daughter. But we were pleased because finally we had a diagnosis.”

Karen’s first course of treatment involved radiotherapy. This meant making a full face-mask designed to ensure that the radiotherapy targeted the areas it needed to.

“They couldn’t shield my eyes because they didn’t know how far back it had gone,” says Karen. “I knew I would have problems with my sight, with facial nerves and jaw damage, but it was the only way to survive.

“They strap you down to make sure you don’t move. So you are more or less screwed into place.

“This is to make sure the radiotherapy hits the bits it is supposed to. They had the cat-scans of the tumour so they knew which bits they had to zap.”

After the treatment, Karen also had kinesiotape on both sides of her face.

“Because I had so much swelling, they wanted to drain as much fluid away so that they could operate just on the excess skin.”

A positive approach to life

Everyone who knows Karen talks about her positive approach to life whatever it throws at her.

And as a sports fan, she is keen to highlight the advantages of having radiotherapy in at St Thomas’s in the summer of 2012.

“Opposite the hospital, the Houses of Parliament were showing projected images of former star athletes on the side of the building. From my room on the ninth floor, I had a perfect view.

“I love sport and I got the chance to watch the whole Olympics. I paid for a month of TV and watched the Games almost 24 hours a day. The only time I didn’t watch was when I was having the radiotherapy.”

She also saw the timing as helpful in another way.

“My husband Chris is a Professor of Material Science at the University of Bath and luckily it was during the summer holiday, which made it easier.

“He had his laptop with him and he stayed in London for the whole of the summer – in a hotel at the most expensive time!

“My daughter Rhiannon stayed with her grandma and they came to see us at weekends. I was 43 at the time. Rhiannon was 10 and I wanted life to be as normal as possible.

“They were wonderful at St Thomas’s. It’s totally different to your local hospital in the way things are set out. It’s a lot more seamless and a bit like an airport.

“They have a café, a hairdresser, a Marks and Spencer, a cinema and a library. It’s a community in itself. They get patients from all over the country and abroad.”

Karen’s six weeks at St Thomas’s included three weeks to build the mask and three weeks’ treatment. She was then sent home to Bath, where six weeks later she began having chemotherapy.

“It was knock-out stuff. I had six cycles and each lasted three weeks. That went on for four or five months.

“I really struggled when I was having the chemo but there were some things that were funny. Ice lollies help with the mouth ulcers so they give them to you when you’re having the treatment.

“It was the one thing I looked forward to. They let you choose your own flavours. I always chose orange. That’s my favourite flavour.

“I started recovering for a bit but then they found more tumours in my left side and my right thigh and I had three further cycles of radiotherapy.

“Six months after that I had another tumour in my left calf. I’m like a patchwork quilt. But I’ve had nothing since 2013. I still go for check-ups every six months.

“I have had a lot of help with my face – trying to reconstruct my eye. Because of the drugs I have problems sleeping and problems eating. Your appetite goes and I’ve had problems with my jaw, which meant I couldn’t open it properly.

“I have co-ordination problems and problems walking. Last night I fell down the stairs at home – all 14 steps from top to bottom. Rhiannon was in the bath at the time.

“My husband was shocked. But I was relaxed. I just lay at the bottom of the stairs for a while and I’m OK.

“So I have gone from working and driving to not working and not driving and not being able to read things. It changes your life completely. I have made adjustments to my life.

“I gave up my job at the Job Centre in Bath and I now get about on buses. Even housework was difficult. I haven’t read a book since 2012 although technology has made it possible for me to read on screens by making the print bigger.

“I also carry a magnifying glass and I don’t mind what people think – I just find ways round to do things.”

The combination of Karen’s illness and treatment meant she could no longer work or drive or do “simple tasks using my sight and due to the effect of the drugs”.

“Thank goodness for the support from my family and friends, who used to bring the whole family meals and take me out during my chemo.”

Despite her problems, Karen continued going to watch Rhiannon train with Keynsham ASC and what was then the Aquae Sulis squad based at the University of Bath – now renamed Team Bath AS. “I wanted to make it normal,” she says.

Karen took readily to the role of Swim 21 co-ordinator.

“Swim21 [now SwimMark] shows the mark of a good club. So you are checking club development plans, getting information about finances and communication plans, checking people have got their safeguarding.

“It’s an overall view of how your club is run. It was Aquae Sulis at the time and we won Club of the Year in 2015. That was recognition of Swim21.

“By then I was arranging all the courses as well, such as team manager, safeguarding and parent and swimmer information sessions for swimmers on such subjects as goal-setting.

“We also did the Swim21 Network accreditation, which had just come in. The club is accredited yearly so it’s an updating thing. It had expired so I had to renew it.

“It’s something you might expect all clubs to do but the network accreditation was quite a big thing because there weren’t many clubs with networks.

“Emily Taylor, the South West ASA club development officer, was a big help in getting our network to work together to get the Network accreditation.

“We also did the Level 2 qualification for coaches. We arranged them for a network of clubs so they didn’t have to organise them themselves. There were 12 clubs in the network at the time. We now have 10.”

The importance of volunteering

Karen stresses the importance of volunteering at that time in her life.

“Volunteering gives you purpose. Otherwise you are just sat at home and you start to dwell on things. It’s nice to give something back as well. It was a job I could do it quite easily.

“It wasn’t anything complicated but it took a lot of time. And I met lots of people. If you don’t know something you have to ask and people love to help you because you are doing something positive.”

Karen now has a different role as club development officer and organiser of courses.

“This week I have run a Team Manager 2 course for people who are going to be in charge when we go away on camps.

“We are taking 28 people to Majorca next October – 24 swimmers, two coaches and two team managers. I’m organising that but I’m not going with them. I haven’t been abroad since I was ill. I can’t get the insurance.”

The best news is that Karen is no longer having any lymphoma treatment and has, as she put it, “learned to adapt my life to my condition”.

“I continue to have many appointments both in Bath and London hospitals, especially for treatments around my eyes and face. I cannot thank their staff enough for what they have done for me and my family over the years.”

Distractions from other areas of your life

She adds: ‘Volunteering for Team Bath AS has had a hugely positive effect on my life. I have met lots of wonderful friends and families.

“By volunteering you can be distracted from other areas of your life. It has given me a focus and I have learned lots of new skills. This is important as I can see the difference that you can make even by doing small things.

“It has enabled me to keep feeling confident rather than hiding away – especially as I have facial problems which you cannot disguise. We have had successes with running training courses for volunteers and coaches.

“I feel very proud to be part of a sport that my daughter loves. Volunteering helps me make a contribution and she sees me being positive about learning new things the way I expect her to try new things in her life. Without having a performance swimming programme in Bath, her opportunities in swimming would not exist.

“The University of Bath Sports Training Village is a wonderful facility with the 2012 legacy 50m pool, gyms and lecture facilities. To be able to run courses, information sessions and workshops there is a real bonus for the aquatics community.”