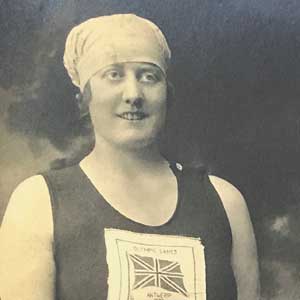 Belle White’s name will live on forever in the diving world.

The four-time Olympian has a cup named after her – the Belle White National Memorial Trophy – which is presented to the female team with the highest aggregate score at the Swim England Diving National Age Group Championships.

White won a bronze medal in the 10m Platform competition at her first Olympic Games in Stockholm in 1912. She went on to compete at the Olympics in Antwerp in 1920, Paris in 1924 and Amsterdam in 1928.

Her only other diving international medal came in the 1927 European Championships in Bologna in 1927. White hadn’t been selected for the British team but travelled independently and went on to win the gold medal.

She was also a proficient swimmer and won the Swedish Magistern which tested both swimming and diving abilities.

Following her retirement from the sport, White became an administrator and official and the Belle White National Memorial Trophy commemorates her lifetime work and achievements.