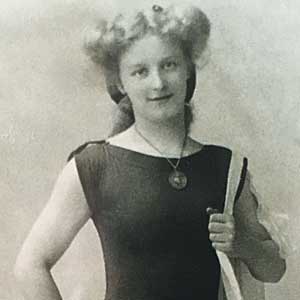 Jennie Fletcher was the undisputed queen of English freestyle swimming at the beginning of the 20th century.

She was national 100 yard freestyle champion from 1906 to 1912 and held the world record for seven years – which she broke 11 times.

In 1908, the Leicester Ladies Swimming Club member was at the peak of her career and due to take part in the London Olympic Games. But due to a lack of competitors, the women’s events were cancelled.

Fletcher did make her Olympic debut at Stockholm in 1912, winning a bronze in the 100 yard freestyle and claiming gold as part of the 4x100m freestyle relay team.

She was given the opportunity to turn professional at the age of 17 but her parents refused to allow her as, being one of 11 children, they needed her to work and contribute to the family.

However, it was the Olympics that gave her the most memorable moment of her career. In an interview years after her Stockholm success, she said: “The crowning moment of my career was when King Gustav of Sweden placed the classic laurel wreath on my head, put the gold medal around my neck and said ‘well done, England!’”

She was inducted into the International Swimming Hall of Fame in 1971.