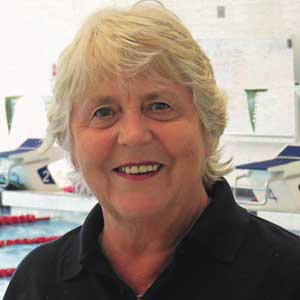 Jenny Gray was a member of Great Britain’s first synchronised swimming team before dedicating herself to coaching.

After initially starting her aquatics journey as a diver with Slough and District Diving Club and then the Metropolitan School of Diving, Gray participated in synchronised swimming shows. She began to develop her training as synchro was becoming a competitive sport in England and eventually competed in the inaugural FINA World Championships in Belgrade in 1973.

After retiring from competing, Gray dedicated herself to teaching and coaching. Following this, she became a National Development Officer for Synchronised Swimming and Diving and was involved in establishing coaching qualifications, primarily for synchronised swimming.

She has judged or refereed at a number of high-level events, including World Championships, Commonwealth Games and Olympic Games as well as being a FINA Evaluator.

Gray has also run coaching seminars worldwide and introduced an intensive biannual residential course for teachers and coaches in England which has been instrumental in ensuring our athletes are able to compete at an international standard and be successful.

She also designed and implemented the Sport and Coaching Studies course at Oxford Brookes University, has written a number of books about synchronised swimming and still guest lectures.

Gray has been a member of the ASA and Swim England for 58 years, and a synchronised swimmer for 52 of those, received an MBE for services to the sport in 2016 and became the first person from England to receive the Paragon Award for Synchronised Swimming by the International Swimming Hall of Fame.