An inspirational keynote speech from Pip Hare provided the opening act at the 2022 Swim England Teaching and Education Conference.

Pip has been a professional sailor since leaving school at 18 and has a career spanning close to three decades.

She is best known for being one of only eight women to complete sailing’s Vendée Globe race, which is a single-handed non-stop race around the world.

The race is run every four years and since its introduction in 1990, only 104 people have ever made the finish line, with Pip being one of the only 10 Brits and eight women to make it around the world.

Following an introductory message from Swim England’s Workforce and Learn to Swim Director, Jon Glenn, Pip spoke to a number of swimming teachers, coaches, educators and swim schools that attended the conference at the voco St. John’s in Solihull, with Pip providing incredible insight into her world and race at sea.

She opened up speaking about her long-term love for the water, saying it’s a place where she felt a connection with the people closest to her.

“We share an element with the water, I may be on top of the water and you guys may be in it but my whole life I’ve had this huge connection with the water.

“It’s helped me as an athlete, it helps me feel calm and it’s where I go to spend time with my friends and family. It’s this golden thread that connects all the people that I know in my life.

“Swimming has an incredible connection with so many different sports, including sailing as well as so many aspects of life.

“That’s why I got involved with the Swim Safe campaign and the people from Swim England as it was something that really resonated with me.” 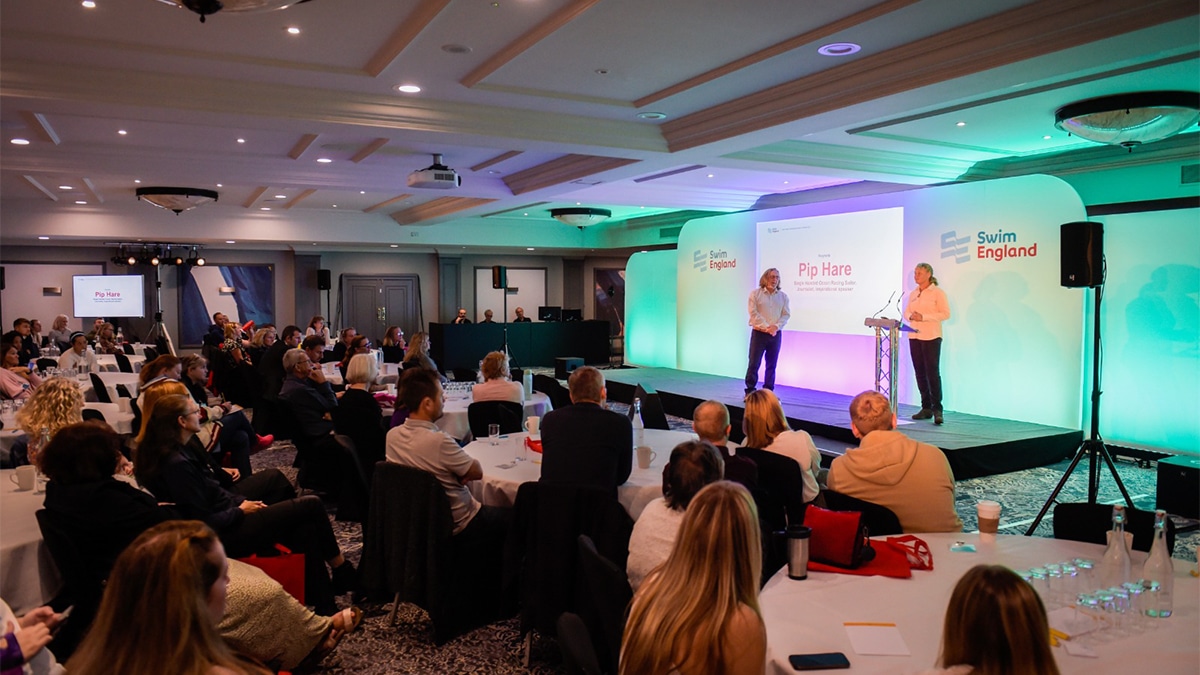 The key topic of Pip’s speech was based around the resilience it took her to complete the Vendée Globe race.

The 48-year old said that one of the most difficult moments for her was actually at the start of her race in 2020 as none of her family and friends able to make the start point in France due to the Covid Pandemic.

“France went into a lockdown 10 days before the start and because of that my friends and family couldn’t get across the border for the start of the race and I had to go into isolation.

“I had to sit in a house on my own before the start, thinking that I’m about to start a race around the world all on my own.

“I felt so alone walking down to the start, I missed my parents more than I ever imagined. I worked for 30 years for this moment and to go out and get on that boat was the hardest thing I did.”

Once she got onto the water, Pip got into the zone but the battle with her body and the boat made every single minute a challenge.

In her 95-day period on the water, Pip spoke about three different things she was reliant against, the boat and its technical challenges, her body and the emotional resilience it took to complete such a feat.

“Maintenance of the boat was a constant problem. Every day there was up to 25 jobs to do each day just to maintain the boat and you can’t stop to fix them because you’re racing.

“I had to climb the mast twice throughout the race and one time it took me two hours to talk myself to go up there and fix the problem.”

“My body took too. I’m 48 years old and I’m racing against 28-year-old men and as you go through the journey you can see my body wasting away.

“In a 24-hour period I would look to have four hours sleep as a minimum but the maximum amount of sleep I could have a time was 30 minutes.

“You can’t take your eye off the boat for any longer, when I started the race I was heavy and weighed 74kg but by the time I’d finished I was 65kg. I was dragging 90kg bags around the boat every day and it was a real challenge.”

Despite years of preparation, Pip spoke about the one thing that she couldn’t have planned ahead for that had a huge impact her journey.

“A Portuguese Man O’War was washed up onto the boat and stung me which made me ill for four weeks of the race.

“Some days I was in pain from it by just stepping out into the sun but I had to keep going because you’re all alone out there and where you’re on your own you surprise yourself.”

After a race filled with challenges, Pip spoke about the determination she had to get to the finish line.

“By the end of the race I was in pain, I was miserable, I was scared but I just kept saying to myself that this would get better and it did.

“I had the Ellen MacArthur’s record for a female skipper in mind and I still had a chance to beat it so I kept pushing way towards the end and despite all my problems I finished less than 24 hours off the record.

“Finishing that race was the greatest achievement of my life and although I could only share it with six people at the finish line, when I was asked ‘what’s next?’, I answered another Vendée.”