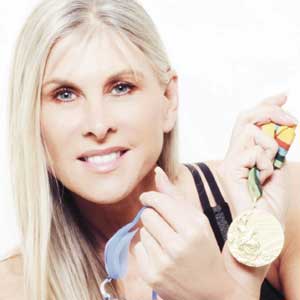 Sharron Davies became a household name at the age of only 13 when she was picked to represent Great Britain at the 1976 Montreal Olympics.

She finished fifth in her 200m Backstroke heat but success soon followed in the 1977 European Championships in Jonkoping, Sweden, where Davies claimed two bronze medals in the 400m Individual Medley and as part of the 4x100m Freestyle relay team.

A further four medals were won at the 1978 Commonwealth Games in Edmonton, Canada, where Davies topped the podium twice, taking gold in the 200m and 400m Individual Medley. She also won two silvers in the 4x100m Medley and 4x100m Freestyle.

Her biggest success came in the 1980 Moscow Olympics when Davies finished second in the 400m Individual Medley.

At the age of only 18, Davies decided to take a break from swimming before returning to the sport and competed in the 1990 Commonwealth Games in Auckland. As team captain, she won a silver in the 4x200m Freestyle and bronze in the 4x100m Freestyle.

Since her retirement, she has become a key member of the BBC team covering swimming at the Commonwealth and Olympic Games where she has interviewed athletes on poolside as well as providing expert insight. Davies also launched Swim For Life, which has raised millions of pounds for various good causes.

In 1993, Davies was appointed an MBE for her services to swimming.