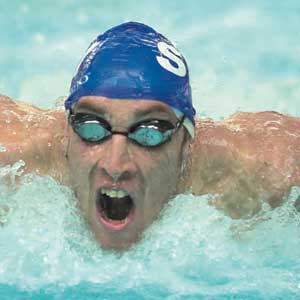 Olympic medallist Steve Parry is well recognised within the swimming community as a tireless campaigner for improving learn to swim provision.

He competed internationally in the 100m and 200m Butterfly, winning 10 major medals at both long and short course competitions at the Olympic Games, Commonwealth Games and European
Championships.

The highlight of his career came at the 2004 Olympics in Athens when he finished third in the 200m Butterfly – winning Great Britain’s first Olympic swimming medal in eight years.

In 2005, he announced his retirement from the competitive side of the sport but his role in swimming has continued to grow. Parry became chairperson of the Swim Group and led the response to the Government’s 2015 Sporting Strategy.

After eight months of research, the report found almost a third of Year 6 pupils left primary school without being able to swim and lacking even basic water safety skills. Parry’s work has helped ensure that learning to swim is not seen as an ‘optional extra’ in the national curriculum.

His entrepreneurial spirit brims with social responsibility and Parry has always ensured that his company, Total Swimming, tackles barriers to swimming lesson provision. He capitalises on his status as a well-known athlete and has involved himself in campaigns to save pools, created a partnership to deliver free swimming lessons and given his time to support various charities.

Parry’s sustained efforts to helping tackle what he terms “unacceptable levels of school swimming” deserve recognition and he is a worthy inductee into the Swim England Hall of Fame.