Today marks five years since British swimmer Lewis Coleman and 99 friends  and family successfully set a Guinness World Record in the 100×100 relay. As part of our 150 year anniversary celebrations, we take a look back at the day.

A team of 100 swimmers featuring British internationals past and present have set a Guinness World Record over 100x100m at Ponds Forge, Sheffield to raise money for cancer research.

British Podium Potential swimmer Lewis Coleman spent the past year organising the ‘Swim4Leukaemia’ event after his mother Maggie was diagnosed with acute lymphoblastic leukaemia in June 2012.

Olympic medallists Rebecca Adlington, Steve Parry and Michael Jamieson were among the 100 who took to the water in front of a full house in Sheffield as the team set a new record of 1 hour 29 minutes and 3 seconds, to smash the old time of 1 hour 37 minutes and 53 seconds set in Australia in 2011. 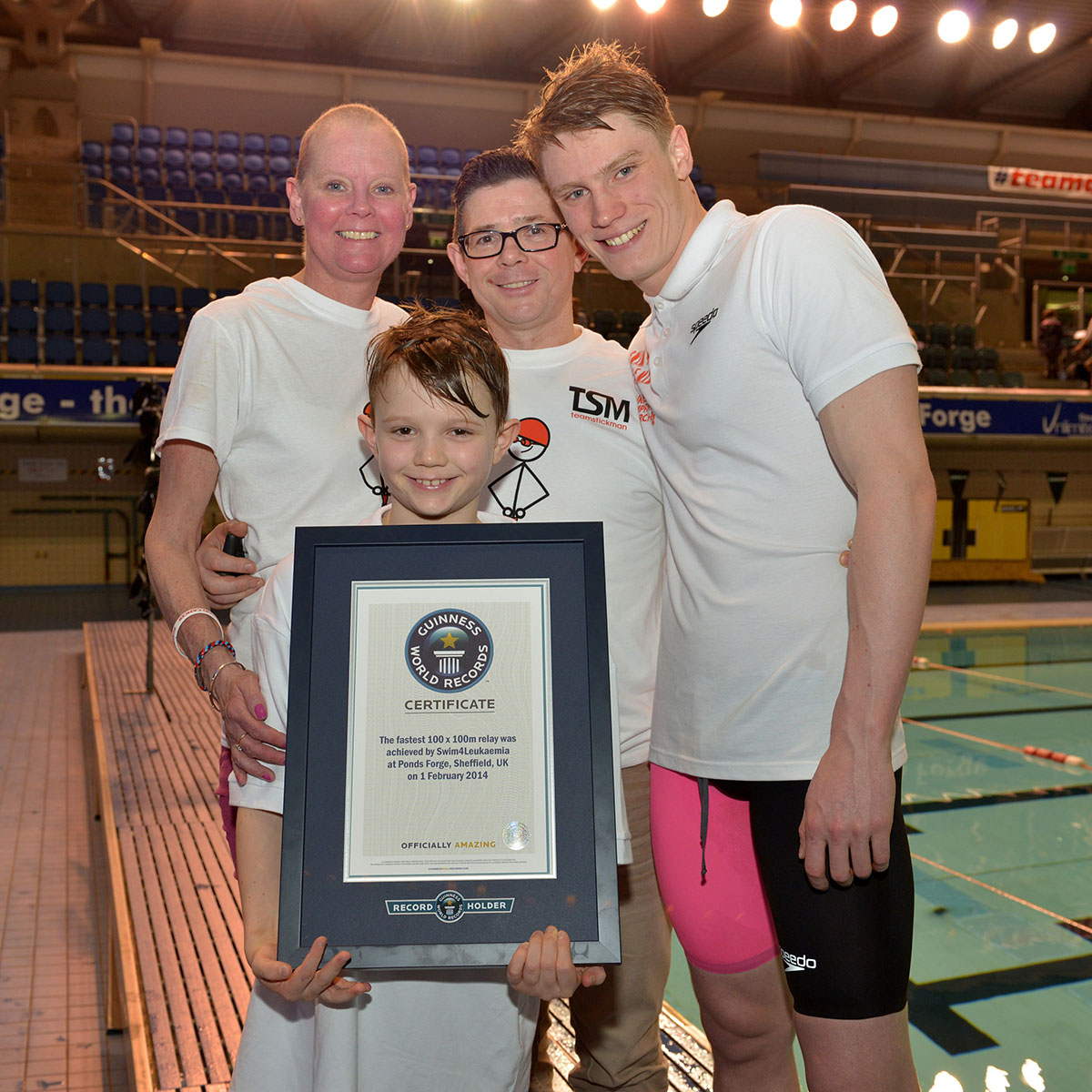 “It was an absolutely fantastic day,” said Coleman. “I’d like to thank everyone for coming down and helping us to raise over £26,000 for Leukaemia and Lymphoma Research [now known as Bloodwise]. Everyone’s support has been overwhelming.

“My world was rocked when Mum was diagnosed with leukaemia and I decided I wanted to raise money to help beat blood cancer.

“I wanted to do my bit so that more people can have access to new drugs or clinical trials to help them beat this disease. Swimming has always been a massive part of my family’s life so I thought it would be fitting for the fundraising event to be swimming related.”

“I just wanted to be part of it and help Lewis,” added Adlington. “His family are going through such a lot and it’s a brilliant charity so I’m really pleased we were able to break the Guinness World Record.

“People travelled from all over the country to take part or watch, which shows what a tight swimming community we’ve got.”

Jamieson said: “I’m in awe of everything we achieved. The atmosphere was brilliant, a huge amount of money was raised and we broke a Guinness World Record! Everyone enjoyed it, although the swimmers were really nervous as we didn’t want to let anyone down.”

“Leukaemia and Lymphoma Research is a charity very close to my own heart because my father suffers from a blood cancer. I was very honoured to take part in such a great event.”

The record breaking team was made up of past and current GB international swimmers, Olympians and National standard club swimmers. In particular,  swimmers from the City of Sheffield Swim Squad and other clubs around the country.

Before the World Record attempt, Lewis organised a series of swim clinics. These were led by Olympic and Paralympic Coach Russ Barber and supported by Olympic, Paralympic, World, European and Commonwealth Medallists and GB International swimmers.