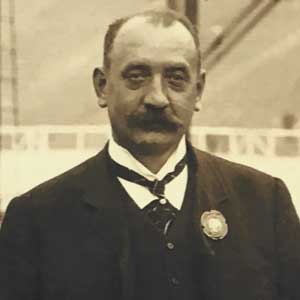 He might be the oldest British swimmer to win an Olympic medal but William Henry is better known for his pioneering work to create the Royal Life Saving Society (RLSS).

Henry did not begin his swimming career until he was in his twenties when he joined the Zephyr Swimming Club but he soon started winning trophies.

Due to his involvement in swimming, he became more and more aware of the epidemic of drownings in Victorian times. Alarmed at the high death rates, he petitioned the Royal Humane Society, urging them to implement training life saving skills in 1887, but no action was taken.

So Henry and a group of like-minded individuals formed the Life Saving Society in 1891. The organisation received great support from the Royal Family and was permitted to add Royal to its title.

Henry staged a number of public demonstrations to show how to swim safely and huge crowds gathered at the Highgate Men’s Pond, Hampstead Heath. More and more people were becoming better educated in life-saving techniques with classes held for park keepers and the Royal Navy.

In 1900, he was part of the British Water polo team which won gold at the Paris Summer Olympic Games. In 1906 Henry took part in the Olympic Games in Athens winning a bronze medal in the 4x250m Men’s relay at the age of 46.

He was inducted into the International Swimming Hall of Fame in 1974.